Iranians will never forget this 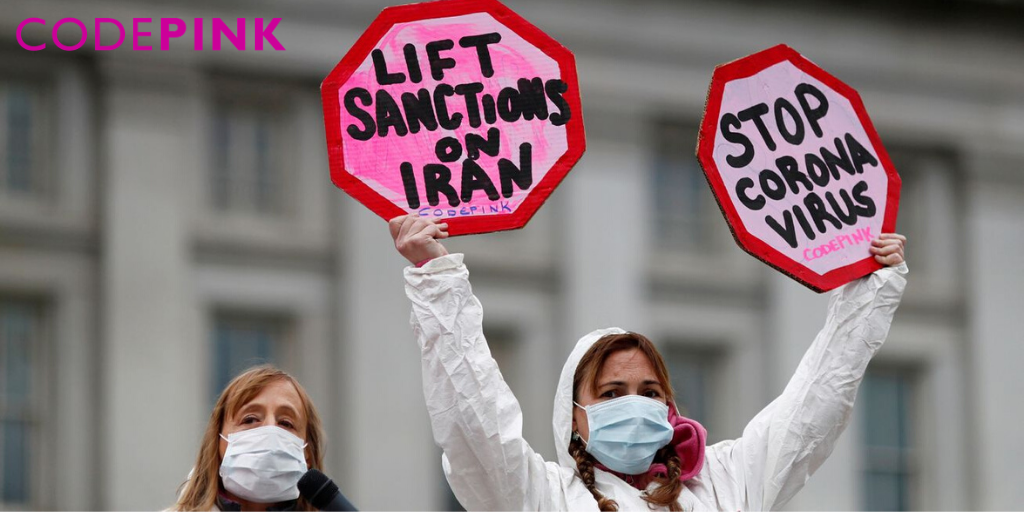 Between the sanctions and the pandemic, there is a medical catastrophe in Iran. As an Iranian-American, I worry every day about my family and the people of Iran. My two nieces are doctors in Iran and they tell me that many health workers in the Iranian hospitals lack personal protection equipment. Medicine is scarce, there is a shortage of disposable parts such as ventilator tubes, and the ventilators are overused and breaking down. Medical equipment cannot be replaced and ventilator parts and connectors cannot be bought due to the sanctions. There have been some international donations, but these donations are not nearly enough because Iran has a population of 83 million, and is the most affected country in the Middle East.

That’s why we MUST call for an end to U.S. sanctions.

Before COVID-19, sanctions were already hurting the most vulnerable Iranians—the poor, the sick, the marginalized. Take cancer medication, for example. The chemo medicines that are available in hospitals are low quality and the side effects, like nausea, are extreme. I know this only too well because I lost my sister to cancer. Her children had to buy chemo meds on the black market and carry them in iceboxes to the hospital for their mother. These medicines are extremely expensive, which means that many people are not even able to buy them on the black market.

I think that my sister’s cancer, like thousands of Iranians, was also related to the sanctions. The rate of cancer in Iran has increased significantly, mainly because Iranians are breathing air that has ten to eight hundred times more toxins than the international standard. That is because the sanctions have prevented the Iranian state from sending crude oil to be refined outside. As a result, the state has created home-grown technologies that produce extremely poor quality gasoline.

Now, the sanctions are killing the Iranian people even faster, because of the Corona pandemic. Tell your Senators and Representative in Congress to join the growing voices — including Dianne Feinstein, Bernie Sanders, AOC, Ayanna Pressley and Ilhan Omar — demanding U.S. sanctions on Iran be lifted.

Even though the Trump administration claims that medicine and medical equipment are exempt from the sanctions, in reality most pharmaceutical companies, as well as banks, insurance companies, and shipping companies, do not do business with Iran because they fear penalization by the U.S.

From the need for cleaner air and cancer medicines to the COVID-19 pandemic, sanctions on Iran MUST be lifted. Contact Congress right now and tell them to add their voices to this urgent call.

The sanctions are not helping the Iranian people’s legitimate protests against austerity measures and the rise in gas prices. If anything, they hurt the social movements and set their achievements back. The sanctions are war by another name. During war, the state deploys the rhetoric of national security to accuse protesters of collusion with the U.S. The Iranian people are caught between the appropriation of the Iranian protests by the opportunistic U.S. hawks and opposition groups such as MEK, and the Iranian state’s crackdown of the protests in the name of national security. The U.S. claims that the sanctions help the Iranian people’s freedom is paradoxical at best. How can the U.S. promote rights and democratization in Iran while depriving the Iranian people of the basic right to food and life-saving medicine? And how can one advocate for human rights but be in favor of sanctions during a pandemic?

Iran is certainly no model of democracy, but then neither is the United States. During this pandemic, we see more clearly than before how race and class determine who is most exposed to the virus and who has access to affordable healthcare. The level of houselessness, mass incarceration (the U.S. has 5% of the world population and 25% of world’s prisoner population), the ICE detention centers,  the historic and present-day violence against indigenous peoples, police violence against black communities, and lack of universal healthcare are all reasons why the U.S. is not in the position to impose sanctions on other states for the violation of human rights. Historically, the U.S. is the only country that has dropped nuclear bombs, and its ally Israel has never signed the non-proliferation treaty. Yet, the U.S. imposes sanctions on Iran based on the claim that the Iranian state is developing nuclear weapons. We saw that this claim was false in the case of Iraq. The sanctions in Iraq killed more than 500,000 Iraqis. Now the Iranian people (and not the state) are paying with their lives for the unjust U.S. sanctions.

Right now, the moral issue is clear: Sanctions and the coronavirus are killing the Iranian people. We must urge Congress to speak out and pressure the Trump administration to lift the sanctions. Ending sanctions will not only help Iranians get jobs, open businesses, have access to food, clean water, clean air, and life-saving medicine, but it will open more space for civil society movements — women’s movement, student movement, labor movement, environmental justice movement — to push for the changes they want to see. You can help them achieve their goals by asking your representatives to lift the deadly sanctions on Iran.

Towards peace and health in Iran,
Sima Shakhsari, Assistant Professor of Gender, Women, and Sexuality Studies, University of Minnesota