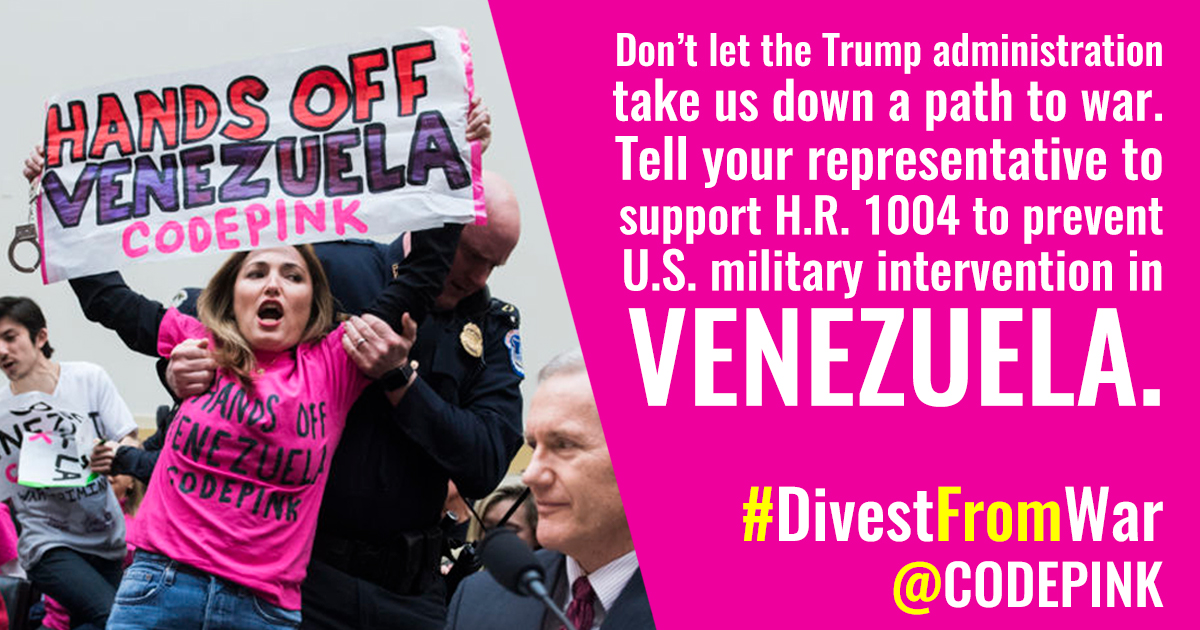 The U.S. is orchestrating a coup in Venezuela that is likely to lead to bloodshed — even civil war. Instead of meddling in the internal affairs of another country, the U.S. should be supporting peaceful dialogue facilitated by mediators such as Mexico, Uruguay, and the Pope. We have seen the effects of past U.S. backed coups in Latin America — Guatemala in 1953, Chile in 1973, Honduras in 2009. It always turns out disastrous for the people — as is evidenced by people fleeing U.S.-orchestrated violence across Latin America and seeking refuge at the U.S.-Mexico border.

Legislation is underway in Congress to promote a peaceful solution. H.R. 1004 seeks “To prohibit the introduction of United States Armed Forces into hostilities with respect to Venezuela.” Introduced by Representatives David Cicilline, this legislation makes it clear to President Trump that without congressional authorization — authorization he does NOT have — he may not use military force in Venezuela.

The U.S. has a long and sordid history of supporting coups in Latin America — Guatemala in 1953, Chile in 1973, Honduras in 2009 — and it always turned out disastrous for the people. It’s urgent that you speak out against the Trump administration’s policy of regime change, including the possibility of a military intervention, by adding your name to H.R. 1004 which seeks “To prohibit the introduction of United States Armed Forces into hostilities with respect to Venezuela, and for other purposes.”

U.S. economic sanctions have devastated Venezuela’s economy, exacerbating food and medicine shortages, widespread poverty, and mass migration. The people of Venezuela need sanctions to be lifted and dialogue between the Maduro government and the opposition. Mexico and Uruguay have offered to mediate, as has the Pope. A democratic process, not a coup, should be supported and no matter what we must not let the U.S. go to war with another country.

I ask you to co-sponsor Representative David Cicilline’s legislation, H.R. 1004, making it clear to President Trump that without congressional authorization, military force may not be used in Venezuela. After co-sponsoring the legislation, please also add your name to the Dear Colleague letter being circulated by Representatives Khanna and Jayapal and encourage revision of the H.R. 1004’s over the top “horror of the Maduro regime” language. H.R. 1004 should emphasize our commitment to honoring the democratic decisions of other countries and revised to reflect the harm being done to the Venezuelan people by U.S. sanctions and the need for dialogue to move forward to solve this crisis peacefully.