Happy Anniversary to the Peace Collective 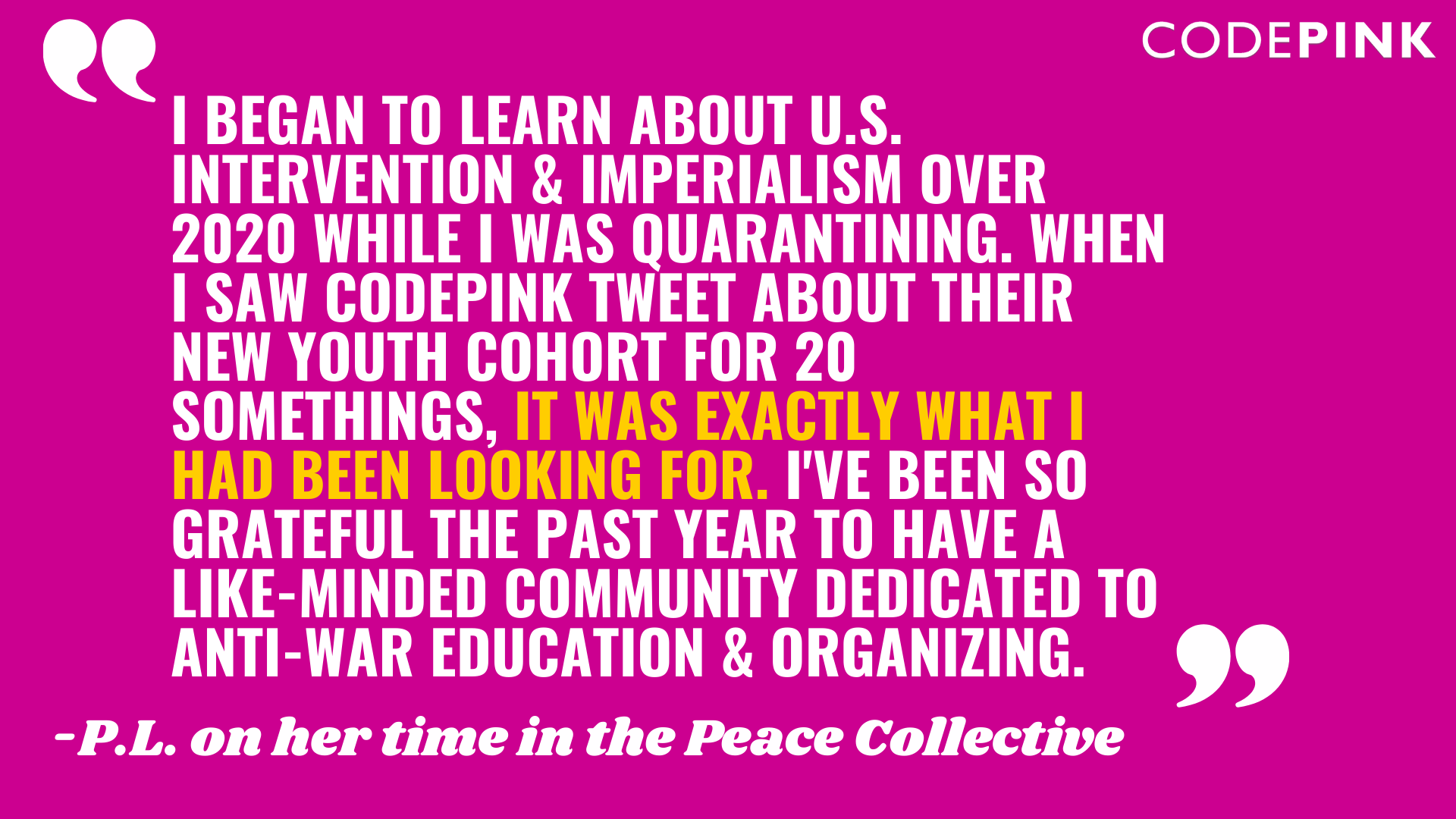 A year ago I was given the opportunity by CODEPINK to launch a project I had always felt passionate about: bringing other young people into the anti-war movement. The Peace Collective was for young people, by young people. And it became what the name suggests: a collective. While I am honored to facilitate our events and projects, it truly became whatever our cohort wanted it to become. Now that it has been a whole year, I wanted to reflect and share with the CODEPINK community what we have accomplished.

Four divestment campaigns have spurred out of the Peace Collective. Members of the collective are organizing to divest their communities from weapons manufacturers in Tennessee, Colorado, New Jersey, and Virginia.

We co-authored a manifesto called A World Without Empire, which we then turned into a zine that demonstrates the world we want to see.

Truthout published our article “Expanding the Military Draft Is Not Feminism. Abolishing Draft Registration Is” in the heat of Congressional debates about including women in the draft system. The article got circulated on Capitol Hill as testimony from young people about their thoughts on Selective Service. The draft expansion was removed from the most recent military budget, pushing off the threat of more people having to register for compulsory military service.

We sustained a monthly book club that allowed us to compile a reading list for other anti-imperialists. Authors like Vijay Prashad and Vincent Bevins joined us to be in conversation about their books. Our reading list along with our manifesto hopes to provide others with our fundamental insight into our own future on this planet: capitalism and imperialism is incompatible with human life and peace.

We hosted CODEPINK Capitol Hill Calling Parties! Rushi Sen, a college student in the Collective said, “One special memory that sticks out to me is hosting the CODEPINK Congress Calling Party about arms sales and transparency. It was an extremely informative event and I’m glad that I got to introduce such knowledgeable speakers, learn more about arms sales to different countries and human rights shields, and participate in the sending of emails to Biden’s office and the State Department at the end. I’m appreciative of the fact that CODEPINK puts on popular education events to inform people about important issues and provides them with resources to contact people that hold positions of power.”

One of my favorite elements of the Collective has been our Intergenerational Coffee hours where we bring together older leaders of the peace movement to learn from one another. We were joined by CODEPINK co-founders Jodie Evans, Medea Benjamin and activists like Diane Wilson, Ann Wright, and more!

Kaitlin (26) joined the Collective four months ago. She said, “I find education, connection, and meaning in The Peace Collective. Not only do we come together for discussion, but we also share a strong vision of peace.” Kaitlin is organizing in Chatanooga, TN to divest the city from weapons companies. “We’ve established links between Chattanooga’s investments and several of the Big 5 weapons manufacturers and know that our ask will be an investment screen. Our next step is outreach to Chattanoogans– I am actually slotted to present the campaign and general divestment information at the January Chattanooga DSA meeting” she said reflecting on the next steps for her divestment campaign. It’s so inspiring to see other young people doing real, on the ground work to take down the military industrial complex.

Ever since I was 17 and found myself in the peace movement, I’ve been mentored by older, radical peace activists. I’m 22 now, and five years later my mentors are asking me the same thing:

Why aren't young people engaged in the peace movement?

My answer back then and today is the same. We are. Young people have always been on the forefront of reimagining a world outside of the war economy. The Peace Collective was a container for all that righteous anger, theory, and action. We may, along the way, find our own little niches where we belong within the movement. All of us are prison abolitionists, anti-zionists, advocates for universal healthcare, and so many more specific issues. As put in our co-authored manifesto, “To defeat the military-industrial complex and its obsession with power, we must begin to look at our existences very differently. We must view the world and each other as abundance instead of buying into the capitalist myth of scarcity. We must begin to challenge the belief that humans are inherently selfish, competitive, and individualistic, because we are not. Greed is taught and we often find that when we are our fullest, most raw selves, we are giving, kind, and interdependent.” Tackling that idea requires young people with a vision to approach it at every angle.

I look forward to another year of the peace collective and I can’t wait to see what it becomes as we keep building it together.

If you are under 30, sign up for the Peace Collective here.