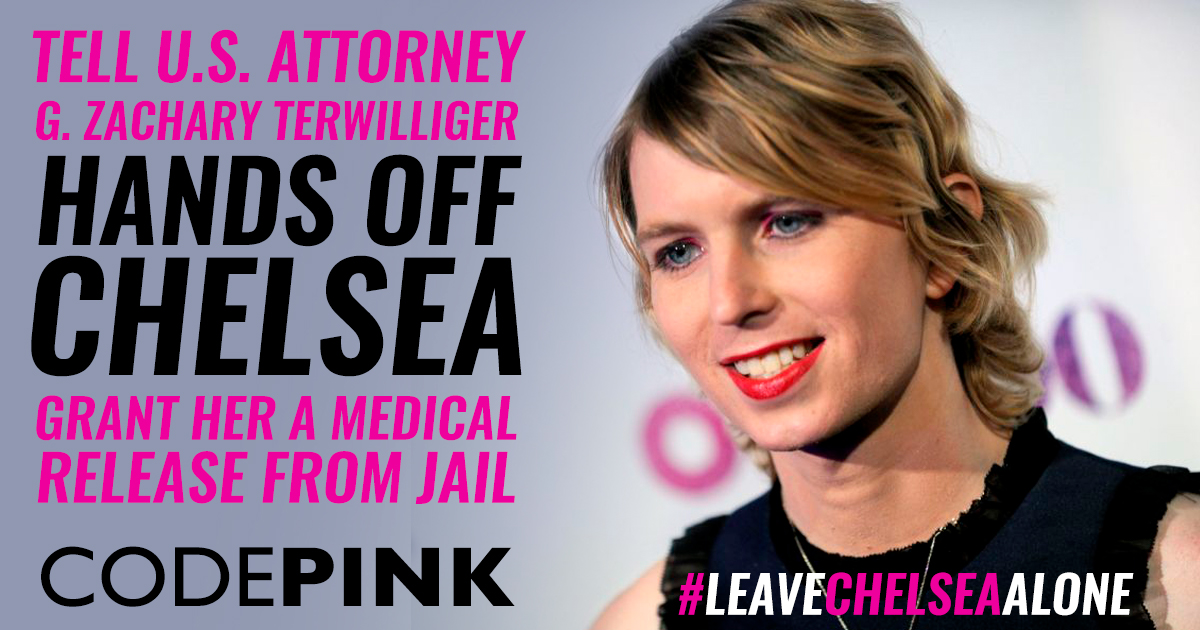 On International Women’s Day, Chelsea Manning was wrongfully jailed for taking a principled stand by refusing to participate in a secret WikiLeaks Grand Jury investigation. Manning and her lawyers requested that she spend her time under house arrest to accommodate her medical needs. Judge Claude H. Hilton refused and sent her to the women’s wing of the federal prison in Alexandria, VA. In a show of solidarity, we showed up outside the jail where she is now being held to elevate her concerns and bring attention to the outrageous way she’s being treated. Watch the video here.

Join us in urging the U.S. Attorney for the East District of Virginia G. Zachary Terwilliger to show compassion and grant a medical release of our sister Chelsea Manning.

What is baffling is that Chelsea has already served time in prison. She was convicted in July 2013 for a series of offenses including violations of the Espionage Act after leaking more than 700,000 classified files of diplomatic cables and other documents to Wikileaks, an event widely known as “Cablegate.” Included in the leaks Chelsea helped make public were videos of the massacre of civilians at the hands of the U.S. during the wars in Afghanistan and Iraq.

Enough already! Chelsea is a trans woman who has already suffered unimaginable harsh treatment at the hands of the U.S. prison system. During her detention at Quantico, she was held in solitary confinement, stripped of her garments, and tortured. While in federal prison, she attempted suicide more than once. She was dishonorably discharged from the Army and had already served 1,294 days in prison when she was sentenced in August 2013 to 35 years confinement with the possibility of parole in 8 years. Manning has already testified repeatedly about everything she knows on this issue-making her arrest even more egregious.