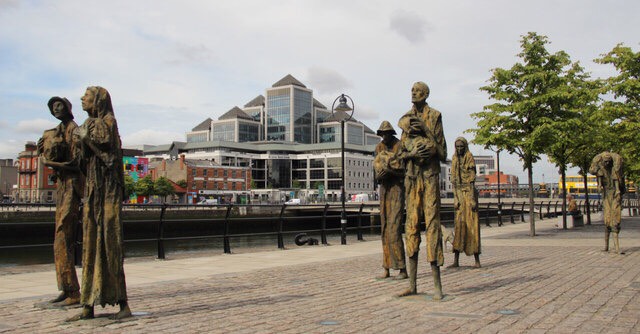 Earlier this year, the Sisters of St. Brigid invited me to speak at their Feile Bride celebration in Kildare, Ireland. The theme of the gathering was: “Allow the Voice of the Suffering to Speak.”

The Sisters have embraced numerous projects to protect the environment, welcome refugees and nonviolently resist wars. I felt grateful to reconnect with people who so vigorously opposed any Irish support for U.S. military wars in Iraq. They had also campaigned to end the economic sanctions against Iraq, knowing that hundreds of thousands of Iraqi children suffered and died for lack of food, medicine and clean water. This year, the Sisters asked me to first meet with local teenagers who would commemorate another time of starvation imposed by an imperial power.

Joe Murray, who heads Action from Ireland (Afri), arranged for a class from Dublin’s Beneavin De La Salle College to join an Irish historian in a field adjacent to the Dunshaughlin work house on the outskirts of Dublin.

Such workhouses dot the landscape of Ireland and England. In the mid-19th century, during the famine years, they were dreaded places. People who went there knew they were near the brink of death due to hunger, disease, and dire poverty. Ominously, behind the workhouse lay the graveyard.

The young men couldn’t help poking a bit of fun, at first; what in the world were they doing out in a field next to an imposing building, their feet already soaked in the wet grass as a light rain fell? They soon became quite attentive.

We learned that the Dunshaughlin workhouse had opened in May of 1841. It could accommodate 400 inmates. During the famine years, many hundreds of people were crowded in the stone building in dreadful conditions. An estimated one million people died during a famine that began because of blighted potato crops but became an “artificial famine” because Ireland’s British occupiers lacked the political will to justly distribute resources and food. Approximately one and a half million Irish people who could no longer feed themselves and subsist on the land emigrated to places like the U.S. But seeking refuge wasn’t an option for those who couldn’t afford the passage. Evicted by landowners, desperate people arrived at workhouses like the one we were visiting. Danny Cusack, an Irish historian, read us the names of people from the surrounding area who had been buried in a mass grave behind the workhouse, their bodies unidentified. They were victims of what the Irish call “An Gorta Mor," literally “The Great Hurt.” It was recently, as I tried to better understand the migration of desperate and starving people now crossing from East Africa into Yemen, that I began to realize how great the hunger was.  During that same period, in the latter half of the 19th century, there were 30 million people, possibly fifty million, dying of famine in northern China, India, Brazil and the Maghreb. The terrible suffering of these unknown people, whose plight never made it into the history books, was a sharp reminder to me of Western exceptionalism. As researched and described in Mike Davis’s book, “The Late Victorian Holocaust,” El Nino and La Nina climate changes caused massive crop failures. What food could be harvested was often sent abroad. Railroad infrastructure could have been used to send food to people dying of hunger, but wealthier people chose to ignore the plight of the starving. The Great Hunger, fueled by bigotry and greed, had been greater than any of its victims knew. And now, few in the prosperous West are aware of the terror faced by people in South Sudan, Somalia, northeast Nigeria, northern Kenya and Yemen. Millions of people cannot feed themselves or find potable water. Countries in Africa which the U.S. has helped destabilize, such as Somalia, are convulsed in fighting which exacerbates effects of drought and drives helpless civilians toward points of hoped for refuge. Many have chosen a path of escape through the famine-torn country of Yemen. The U.S. has been helping a Saudi-led coalition to blockade and bomb Yemen since March of 2015. Sudanese fighters aligned with Saudi Arabia have been taking over cities along the Yemeni coast, heading northward. People trying to escape famine find themselves trapped amid vicious air and ground attacks.

In March, 2017, Stephen O’Brien, head of the UN’s Office for the Co-ordination of Humanitarian Affairs, traveled to Yemen, Somalia, South Sudan and Northern Kenya. Since that trip, he has repeatedly begged the UN Security Council to help end the fighting and prevent conflict-driven famine conditions. Regarding Yemen, he wrote, in a July 12, 2017 statement to the UN Security Council that: “Seven million people, including 2.3 million malnourished (500,000 severely malnourished) children under the age of five, are on the cusp of famine, vulnerable to disease and ultimately at risk of a slow and painful death. Nearly 16 million people do not have access to adequate water, sanitation and hygiene, and more than 320,000 suspected cholera cases have been reported in all of the country’s governorates bar one." This number has since risen to 850,000.

Ben Ehrenreich describes famine conditions along what the Israeli theorist Eyal Weizman calls the ‘conflict shoreline’, an expanding band of climate change-induced desertification that stretches through the Sahel and across the African continent before leaping the Gulf of Aden to Yemen. He notes that this vast territory, once the site of fierce resistance to colonial incursions, is now paying the heaviest price, in disastrous climate conditions, for the wealth of the industrialized north. As the deserts spread south, ever more dire conflicts can be expected to erupt, causing more people to flee.

Of a drought-stricken area of Somaliland, Ehrenreich writes: “People were calling this drought sima, ‘the leveller,’ because it affected all of the clans stretching across Somaliland and into Ethiopia to the west and Kenya to the south.”

“The women’s stories were almost all the same,” writes Ehrenreich, “differing only in the age and number of children sick, the number of animals they had lost and the number that survived. Hodan Ismail had lost everything. She left her husband’s village to bring her children here, where her mother lived, ‘to save them,’ she said. ‘When I got there, I saw that she had nothing either.’ The river and streams, their usual source of drinking water, had gone dry and they had no option but to drink from a shallow well at the edge of town. The water was making all the children sick.”In 1993, at the Rio de Janeiro "Earth Summit," delegates conveying the views of then-President George Bush Sr., voiced a refrain of the statement, “the American lifestyle is not up for negotiation." U.S. demands of the summit incalculably restricted the changes to which it might have led. Representing President Bill Clinton six years later, Secretary of State Madeleine Albright defended planned bombardment of Iraq, saying “If we have to use force, it is because we are America; we are the indispensable nation. We stand tall and we see further than other countries into the future, and we see the danger here to all of us."

There is danger that must be recognized.  The danger is real and the danger is spreading.  Violence spreads the famine, and the famine will spread violence.

I find myself repulsed by assertions voicing U.S. exceptionalism, yet my own study and focus often omits histories and present realities which simply must be understood if we are to recognize the traumas our world faces. In relation to conflict-driven famines, it becomes even more imperative to resist the U.S. government’s allocation of 700 billion dollars to the Department of Defense. In the U.S., our violence, and our delusions of being indispensable stem from accepting a belief that our “way of life” is non-negotiable. Growing inequality, protected by menacing arsenals, paves a path to the graveyard: It is not a "way of life." We still could acquire a great hunger: a transforming hunger to share justice with our planetary neighbors. We could shed familiar privileges and search for communal tools to preserve us from indifferent wealth and voracious imperial power. We could embrace the theme of the Irish sisters at their Feile Bride gathering: “Allow the Voice of the Suffering to Speak” and then choose action-based initiatives to share our abundance and lay aside, forever, the futility of war.

Speaking of the futility of war, the women-initiated peace group CODEPINK is organizing a protest at the Saudi Arabian Embassy in DC on Thursday, October 5thfrom 12-1pm to commemorate the anniversary of the bombing of a Yemeni funeral that killed 140 people and call for an end to the Saudi led and US-backed war in Yemen.