CODEPINK Statement on Trump's Recognition of the Golan Heights

CODEPINK is appalled at President Trump’s announcement that the U.S. will be unilaterally and falsely declaring the occupied Golan Heights to be Israeli territory. On Thursday, March 21, Trump tweeted, “After 52 years it is time for the United States to fully recognize Israel’s Sovereignty over the Golan Heights, which is of critical strategic and security importance to the State of Israel and Regional Stability!” 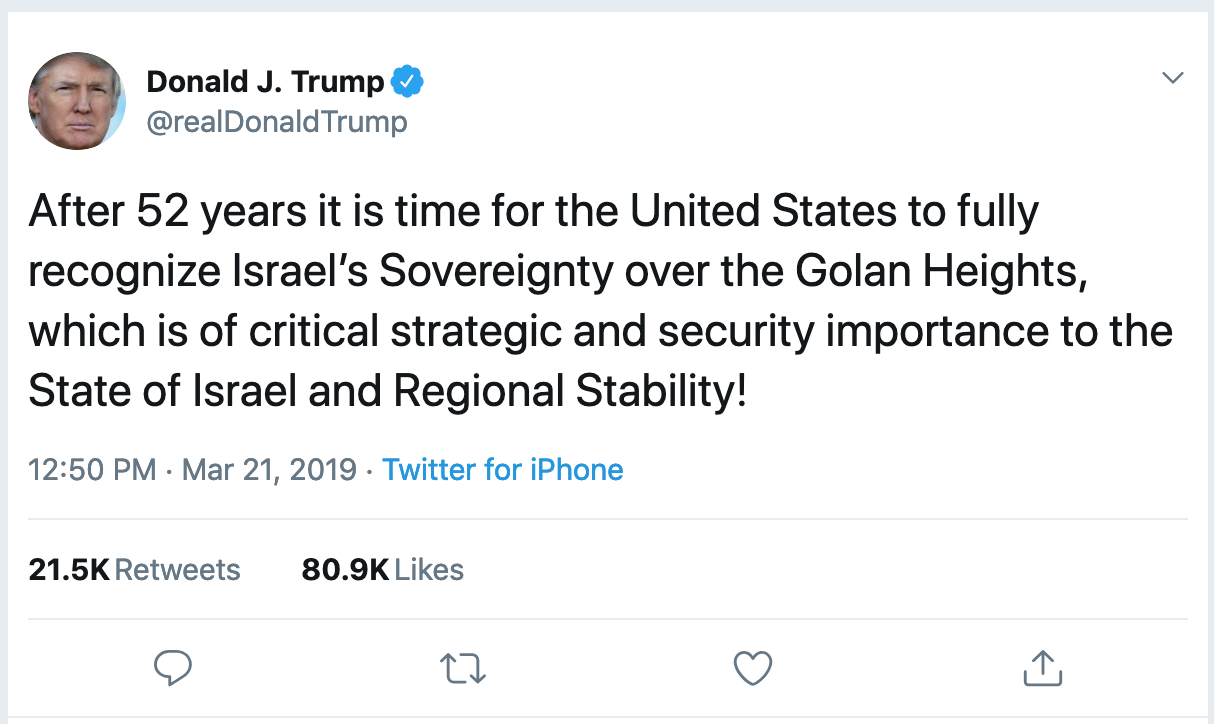 The Golan Heights is internationally recognized as being Syrian land despite having been illegally occupied by Israel since 1967 and formally annexed in 1981.

During the 1967 invasion, Israel forcibly displaced over 130,000 Syrians. Today, only around 25,000 Syrians remain in the Golan Heights in five villages. The Golan Heights contain 34 settlements, home to around 22,000 Israeli settlers, and 167 settlement business. Over the past eight years the Golan Heights settler population has increased by a third while Israel has continued to implement discriminatory policies such as home demolitions, land confiscations and erasure of Syrian culture to drive the remaining native Syrian population out. Trump’s recognition of Israeli sovereignty follows a plan introduced in June 2018 by Israeli Deputy Minister Michael Oren and endorsed by Israeli finance Finance Minister Moshe Kahlon to rapidly develop settlements in the Golan Heights, aiming to raise the settler population to 100,000 Jews within a decade.

Trump’s unilateral declaration of Israeli sovereignty over the Golan Heights flies in the face of international law and consensus which clearly recognizes the area as occupied territory - no other country in the world accepts Israel’s false claim of sovereignty over the Golan heights . The announcement follows Trump’s dangerous decision to move the U.S. embassy to Jerusalem. Both actions inflame tensions, make it more difficult to achieve peaceful diplomatic solutions in the area, and further emphasizes that the U.S. is acting to harm, rather than help, the possibility of peace in the Middle East.