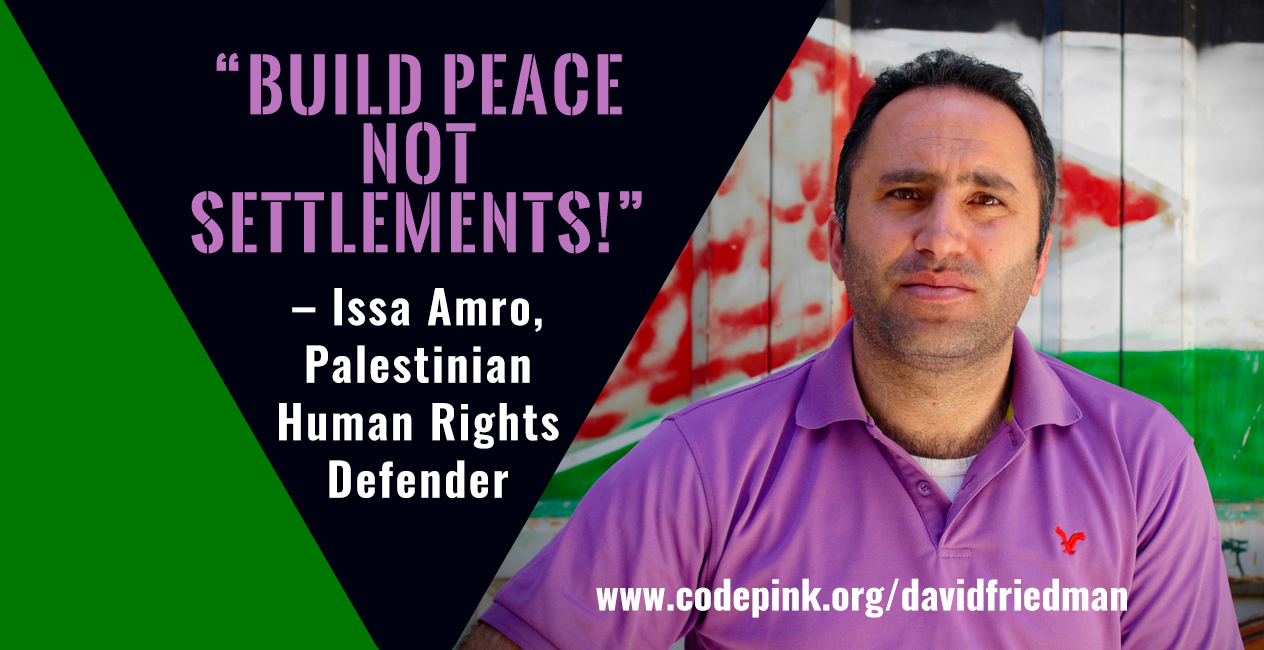 My name is Issa Amro. I am a recognized human rights defender from the West Bank city of Hebron. I was born into occupation. I have spent my entire life thus far without freedom or equal rights. I am currently facing 18 chargesin Israeli military court for my nonviolent human rights work. I am proud to partner with and be supported by CODEPINK, an organization that devotes itself to the struggle for freedom and equality.

Last Friday, the United Nations passed Security Council Resolution 2334, reaffirming that the West Bank, including East Jerusalem, is occupied territory and demanding that Israel immediately halt settlement expansion! While this is not the first UN resolution stating that Israeli settlements have “no legal validity,” its timing is vital and significant. In 2017, Palestinians will mark 50 years of occupation of the West Bank, East Jerusalem, and Gaza. In Hebron, we will also mark 23 years since Israeli settler Baruch Goldstein opened fire in the Ibrahimi mosque, killing 29 Palestinians in worship and injuring 125 more. Since then, heavily armed Israeli settlers have been allowed to roam the streets freely in Hebron, while Palestinians face closures, restrictions, and 12 permanently staffed checkpoints.

My work to build a local peace economy in Hebron and train Palestinian youth in the practice of nonviolent resistance can’t be done alone. Please consider making an end of the year donation to CODEPINK so we can continue our joint work for freedom, justice, and equality for all.

The UN just sent a clear message to Israel that it must immediately end its flagrant violations of international law and Palestinian human rights. However, Israel responded by thumbing its nose, initially saying that they would continue settlement building, and stating that they cannot wait for the Trump administration to come into power. David Friedman, the bankruptcy attorney Trump has tapped to be the next US Ambassador to Israel, has raised billions of dollars to support illegal settlements. He wants to move the US embassy to Jerusalem, supports Israeli annexation of the West Bank, and gives Israeli settlers a green light to commit acts of violence with impunity.

Upon hearing of Friedman’s nomination, CODEPINK immediately went to work on a petition demanding that the incoming 116th US Congress not confirm Friedman to be the next US Ambassador to Israel! This type of rapid response is why CODEPINK’s work is so vital and effective. If you have not done so yet, please sign the petition to stop Friedman!

As I am awaiting my next court date in Israeli military court, where the conviction rate is over 99%, I know that I am not alone. I have seen CODEPINK’s power to make a difference. This past year they celebrated the victories of ending certain arms sales in Saudi Arabia, opening US relations with Cuba, getting Ahava to announce that they will move their factory out of the West Bank, and so much more. Like in past years, next year CODEPINK will continue providing opportunities for people to travel with them, including the possibility of another CODEPINK delegation to Palestine and Israel. Please consider making a donation today to help CODEPINK continue their work for a more peaceful world in 2017.

Thank you. Towards a peaceful new year,