Film as a Tool for Justice and Peace: An Interview with Jodie Evans 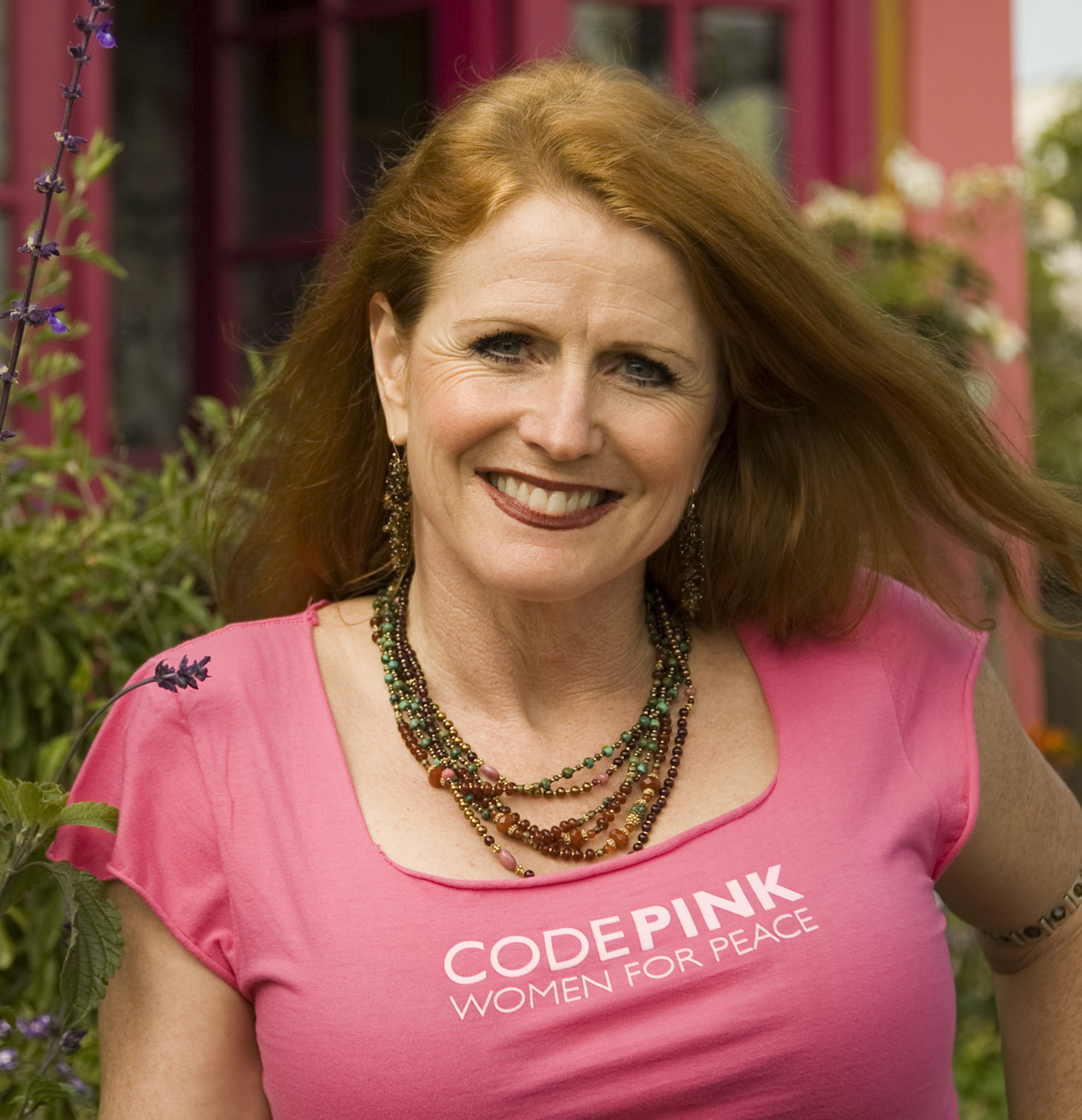 Before co-founding CODEPINK with Medea Benjamin and others in fall 2002, Jodie Evans  produced documentaries - which she continues to produce and promote in the mix of many other responsibilities. A list of Jodie’s films can be found here. The wide range of issues addressed by documentaries she has produced is remarkable, from local food production, to veterans’ witness on war, to a bio-pic on Daniel “Pentagon Papers” Ellsberg and more. As her latest film, “Shadow World” about the international arms trade has just come out, I caught up with Jodie to talk with her about documentary film as a tool for justice and peace.

JW: How did you get interested in producing documentaries?

JE: When I turned 40, I realized that I had become a successful woman, and I thought: how did I do all this? In 1970, I was a hotel maid and I took part in a struggle for a living wage. Growing up in Vegas was a piece of this, staying feminine in my power. What about being a Vegas woman had to do with that combination? Then I wanted to make a film about this. So many films about women in Las Vegas just show the stereotypes, like “Showgirls.” There’s not a lot of films that show women, as women.

I fell into a beautiful collaboration with a woman, Amie Williams, who had just graduated from UCLA. “Stripped and Teased” [about women of various occupations in Vegas] ended up telling the stories of 20 women for 2 and ½ years. Amie and I would talk to women, shoot film, live in strip clubs and hotels for a week, then go back to “regular life.” I went through a process of becoming who I am from learning from these women. We lived every moment of that film together, with another woman who was our line producer and location scout.

If a documentary doesn’t teach [the producer/film maker], it’s not going to teach anyone else. If it wasn’t for the friends who believed in me, this film would never have happened. Susan Griffin’s book on pornography [“Pornography and Silence”] was really important; she became a good friend. Seeing the beauty and the power of these women changed me.

When “Stripped and Teased” came out, it was the pick of the week of various newspapers. I always spoke at the film showings, men came expecting naked women but instead they saw the “real women” of the film. Premiering at the Huntington Theatre in Vegas, where I had grown up with .25 Sunday double features, was a big moment.

To watch the women see themselves honored and loved – changed them. Just putting the camera on someone changes them. One woman in the film decided to run for Congress and was elected.

I got the bug, and that started me in the process of wanting to do more storytelling, story revealing and more of my own becoming.

JW: Please talk about “The People Speak” which is such a great teaching film.

JE: Howard Zinn [author of “A People’s History of the United States, which the film is based on] had always wanted to have his book filmed (many had tried). Because of CODEPINK and “Twilight of Empire”, my friendship with Viggo Mortensen led me to the public readings of selections from the book. It a priceless experience working with Howard, [director] Anthony Arnove and the actors and musicians who were doing the readings.

A documentary isn’t easy. You may have one idea, but you’ve got to be willing to ride the storm. We thought it was going to be a few days of shooting and it ended up taking 2 years.

The History Channel bought the film. They have done 500 hours of war, and we sold it to them saying that they should do a few hours of peace.

Howard flew out to Santa Monica, for a dinner with Jane Fonda and Barbra Streisand at my home to celebrate the film.  The day he arrived he was swimming in a hotel pool and died. He got to tell the story he wanted to tell.

It was a beautiful process for everyone. With every documentary, the people involved in it become a family. We continue to work together.

JW: How did you come to make “The Most Dangerous Man in America,” which was nominated for an Academy Award for Best Documentary Feature in 2009?

JE: I had a connection to Daniel Ellsberg through my husband who contributed to his legal support to keep him from going to prison.  We needed more whistleblowers on the US military and our war in Iraq, I was on fire to raise the money we needed to get this film made.

Many people were generous in stepping up to help, and in the process, we learned it really needed to include the love story between Daniel and Patricia [Ellsberg].

JW: I saw the film three times, and the last time I saw it I came to the realization that Patricia, even more than Daniel, was the hero of the story. Her love and her commitment to peace were so deep.

JE: Yes, she is so important to that story.

That film included some re-enactments of his putting the documents in the Xerox machine and other things that were not filmed at the time [for obvious reasons]. Sometimes re-enactments are controversial. But they were needed in this case. Everybody had the courage to go there.

When Daniel Ellsberg went to Russia to see Ed Snowden, Ed grabbed him and said when he saw the film he had the courage to come out as a whistleblower. Snowden gave credit to the film when he received the Dresden Peace Award.

JW: What does a film producer do?

Political documentaries are created out of passion. You are driven by the story. You have to have a willingness to let go, unlike with fictional films where the story is already created by the writers. You have to follow the story, sometimes for a long time. The documentaries that do well reflect that love affair.

I have never met a documentary filmmaker who wasn’t on the floor, crying, at some point in the process. Often this crisis comes about when “I can’t find the arc of the story” or things aren’t falling into place, or you’ve mortgaged your house and maxed out your credit cards. Where is the breath to finish the film?

Most women documentary filmmakers definitely go through that. It’s a field where there are more women than men as the filmmakers. There’s no (or little) money in it, and it’s not run by the studios.

Each film is different, the expectations and roles vary, but usually a producer is responsible for thousands of details it takes to make the film, like money, partners, distribution, PR, budgets and taking care of the needs of the director, so they can be free to breathe with the story.

An Executive Producer raises and gives money.  They can be an important diplomatic channel between the director and producer when the hard questions come.  They usually make sure the story stays strong.

JW: The documentary about the Tahrir Square uprising in Egypt was amazing, and must have been so difficult to work on!

JE: With “The Square”, I was literally the midwife. How do I raise the money? How do I get you [the filmmakers] through the day? I was involved every day, feeding and housing filmmakers.  Again, that year we worked so closely. We’ll be a family until the end of our lives. You go through the deepest part of what it means to be human together. The film is about revolution.

I stepped in to say “this is NOT going to be co-opted”. It will tell an honest story. I come in as an activist in the film-making process.

JW: Can you say more about what you do as a producer?

To each film, I bring a different skill set. It’s bringing a team together, having conference calls once a week. We’ve got to be on the same page, have a shared vision.

I have been executive producing a film about the feminine universe, with Emily Levine [philosopher-comic] as the subject for 9 years: a theater piece in my living room, a Ted talk, and now finally a film. It has a life of its own. Probably when it comes out, it will be the perfect timing.

A lot of documentary filmmakers will tell you that you have a living relationship with the story, and it will change your life.

JW: How does a documentary film reach and teach people?

JE: That’s called the impact strategy: you finish the film and then you do outreach and media.

Participant Media  gives money to help films “get out there.”

“This Changes Everything” [on climate change] has a long-term, well-funded impact strategy.

Films open in film festivals. They can be powerful gatherings.

More people watch films than read books. This film takes Naomi’s book into a new form, which is hard work. How do you weave together these pieces about climate change without sounding didactic? How does Naomi speak in a different way than in the book?

I raised over a million dollars for this film, as part of an executive producing team. I wanted a non-talking-heads film, it took work until the very end to let the stories lead!

JW: Well, I want to thank you for doing that, because “This Changes Everything” is a visually beautiful film, unlike a lot of environmental films I’ve seen.

JW: How have social media and the internet changed how documentaries are viewed or used?

For example, with “Power of Nightmares” [a series of 3 documentaries for the BBC on the use of fear as a political tool] - we handed it around, Beta VHS. It couldn’t even come to the United States because the filmmakers would have had to pay thousands of dollars for archival footage. Now finally it’s online and people can see it.

Having a film about rape in the military [“The Invisible War”] has really changed the conversation about military sexual abuse. It’s led to some action by Congress.

JW: What is a favorite documentary that you have NOT produced?

“The Sorrow and the Pity”.

“The Act of Killing” is one of the most powerful things I’ve seen. It’s about the genocide in Indonesia.

JW: What would you say to young documentarians just starting out?

JE: Getting the film to the people - getting the audience - is the biggest problem.

There are videos and films that get millions of views but they don’t change the world. You’ve gotta think through all the pieces. You’re connecting to the communities that you want to help - so, for example, add petition links, a list of actions people can take after seeing the film, media to watch rather than mainstream media, a vocabulary list of other ways to talk about something.

Telling the truth and exposing the lies is the most important thing you can do. What do you give your life to? It’s spirit-enlivening. It will give you a true core to your being, in the way that “the world” can’t.

JW: Thank you so much, Jodie.