Eviction notice to be served at the Venezuelan Embassy. Is Guaidó out? 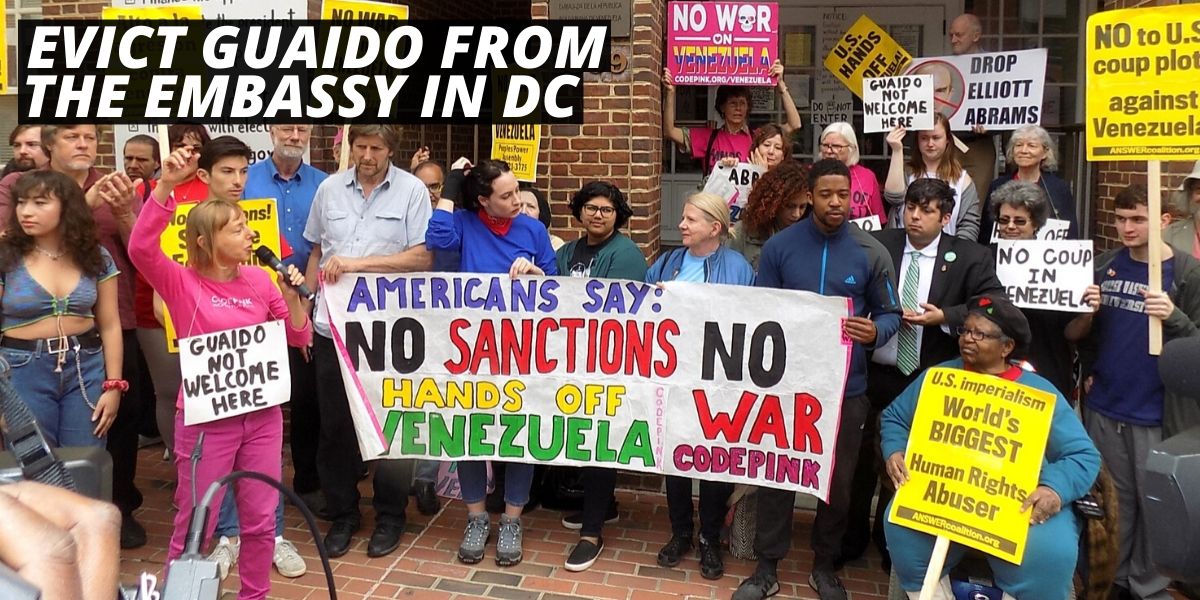 The trial of Embassy Protectors members Adrienne Pine, Kevin Zeese, Margaret Flowers, and David Paul ENDED IN A MISTRIALl! This is incredible considering the bias shown by the judge against the four embassy defenders.

First, we want to thank all of you who joined us at the embassy as we remained there for over a month. Let’s build on the momentum of this partial victory to all work together again, this time to remind Carlos Vecchio, Juan Guaidó’s representative in DC, that he is occupying the Embassy violation of international law.

We defended the embassy for over a month braving physical and verbal assaults as well as police forces that did not respect our civil rights.  We stood up for international law, sovereignty and the Venezuelan people, earning their admiration and gratitude. But the threats against the Venezuelan people aren’t over, and we have an opportunity to show them that we’re still fighting for them by telling Guaidó’s representatives in DC to leave the Embassy forever.

Serve the coup mongers an eviction notice! Once the signatures are collected, we will deliver the notice in person and stream it live.

The Collective final four (as we affectionately refer to Adrienne, Kevin, Margaret and David) still face the possibility of a retrial, but after months of stress, they are relieved at the result. The coalition, initiated by CODEPINK, and built into Collective, continues to work together. Reminding Vecchio that the American people don’t recognize him as an ambassador is a great way to keep our movement active.

The Collective's defense of the Embassy on April 30, during Guaidós failed uprising in Venezuela, was a symbol to Venezuelans that Americans don’t support our government’s militaristic foreign policy. It raised hopes during a trying time. Now we have the chance to show them that not all Americans support Guaidó, despite what Speaker Nancy Pelosi and other politicians who support him might think.

Remind Juan Guaidó that while he has the support of our government, he doesn’t have the law or the American people on his side, so his cronies should return the embassy to the legitimate government of Venezuela! Add your name to the notice to evict his cronies from the embassy and we will hand-deliver the eviction and stream the delivery live.

CODEPINK played a fundamental role in the creation of the Collective and we have supported the four since that were arrested back in May. We are hopeful that the mistrial will mark the end of this case, although there is a possibility that the government will retry the case. Now that our spirits are up as a result of the trial, we should take advantage of that to take action in defense of international law and the Venezuelan people.