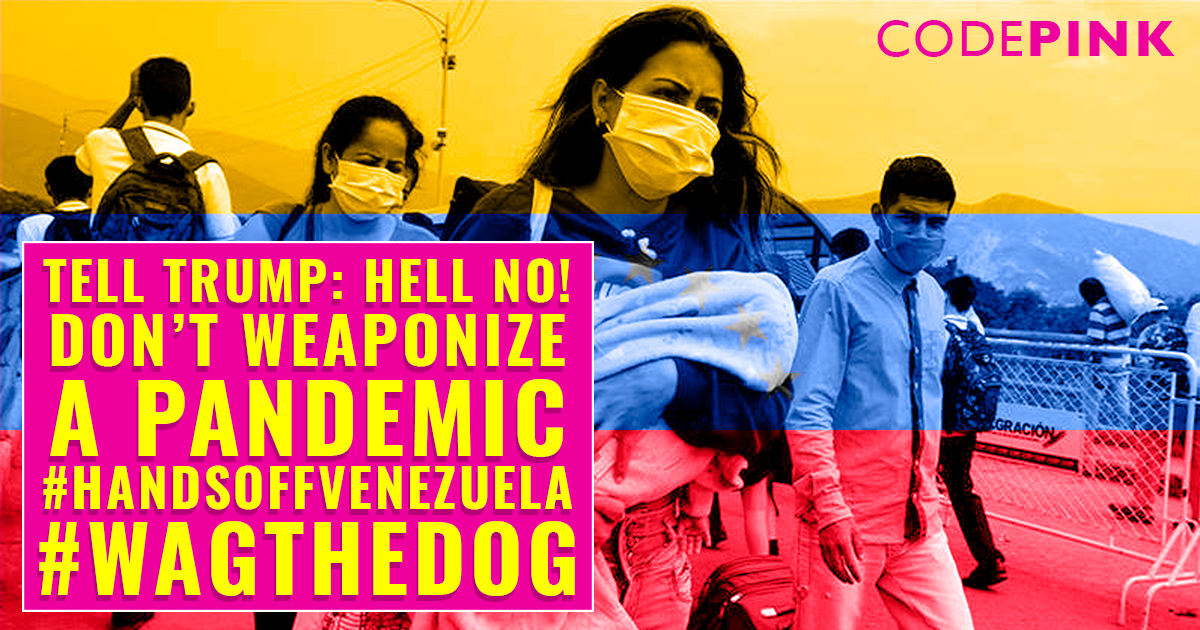 President Trump just used what was meant to be a press conference about his late and grossly inadequate response to COVID19 to announce a naval deployment to Venezuela — a major step towards a new war during this global pandemic! Trump did it only one day after telling the country that we need to prepare for 100,000 to 240,000 deaths. Wagging the dog — distracting from a scandal or a calamity by shifting focus to something entirely unrelated — is a tried and true political maneuver and we can’t let Trump get away with it. Venezuelan lives are in the balance, U.S. lives are in the balance, and world health and safety is in the balance. Act now!

Add your name to the demand for NO WAR ON VENEZUELA!

Trump claims that he must deploy the military to Venezuela in order to stem the flow of narcotics and HE even had the gall to justify his naval deployment as part of the war on COVID19 itself! WHAT IS HE SMOKING?

You don’t need us to tell you how incompetent the Trump administration’s response to COVID19 has been. We’ve all either seen it or felt it directly and now he’s sending us on the path to war in order to distract us from the uncertainty and danger we’re facing and the negligent, even criminal responses that the Federal government has (or hasn’t) taken thus far.

This latest move is yet another step in Trump’s threat to “smash” and destroy the legitimately elected government of Venezuela. Last week, his administration indicted Venezuela’s President Nicolas Maduro on bogus drug charges and put out a $15 million dollar reward for information leading to his capture. Trump and Defense Secretary Mark Esper recently met with Venezuela’s neighbors Brazilian President Jair Bolsonaro (who has called COVID-19 a “measly cold and is the only major world leader still refusing to shut down his country) and Colombian President Ivan Duque — suggesting that something even more ominous is in the works. The State Department is also using more aggressive rhetoric, declaring that the “Monroe Doctrine 2.0” is in effect and vowing to apply “maximum pressure”, as CODEPINK recently warned.

In addition to the naval deployment, Trump plans to intensify the sanctions on Venezuela, which, according to former U.N. special rapporteur Alfred de Zayas, have already killed 100,000 innocent civilians in Venezuela.

Trump’s justification for the naval deployment is an alleged plot by Maduro to “flood the streets” of the United States with cocaine. This is preposterous, as the U.S. government’s own statistics show that 90% of the cocaine in the U.S. — which is the world’s biggest consumer of cocaine — comes from Colombia, the world’s biggest producer. Venezuela doesn’t even produce cocaine. At worst, it’s a transit country, but less than 7% of cocaine in the U.S. has flowed through Venezuela. If cocaine was really the issue, the Navy would be deployed to the Pacific, where 84% of it is trafficked, as CODEPINK pointed out in this article.

The Venezuelan government denounced the deployment as an “aggression”, but also said they are willing to “lend any necessary cooperation and coordination aimed at containing the advance of drug trafficking groups and organized crime in the region.” Venezuela has complained for decades about drugs and cartels flowing out of Colombia and the horrible consequences this brings for Venezuelans. If this were really about drugs, why wouldn’t Trump take them up on the offer to face this problem together?

Trump is also blaming Venezuela for the U.S. opioid epidemic, which he claims is exacerbating the spread of COVID19. Trump & co. must think we’re stupid enough to buy his false war during a pandemic! Don’t let Trump wag the dog and tell him to keep his Hands Off Venezuela!

In solidarity with the Venezuelan people and everyone around the world suffering from COVID19,