Thanks for being members of the divest from the war coalition. We now have campaigns targeting cities, pension funds, schools, religious organizations and the biggest asset manager in the world: BlackRock. We are finding creative and disarming ways to let them know they are making a killing on killing.  Below are some of the active campaigns.  Drop us a line if you want to join or start a campaign in your area at [email protected] and visit the resources page of our website for guides. 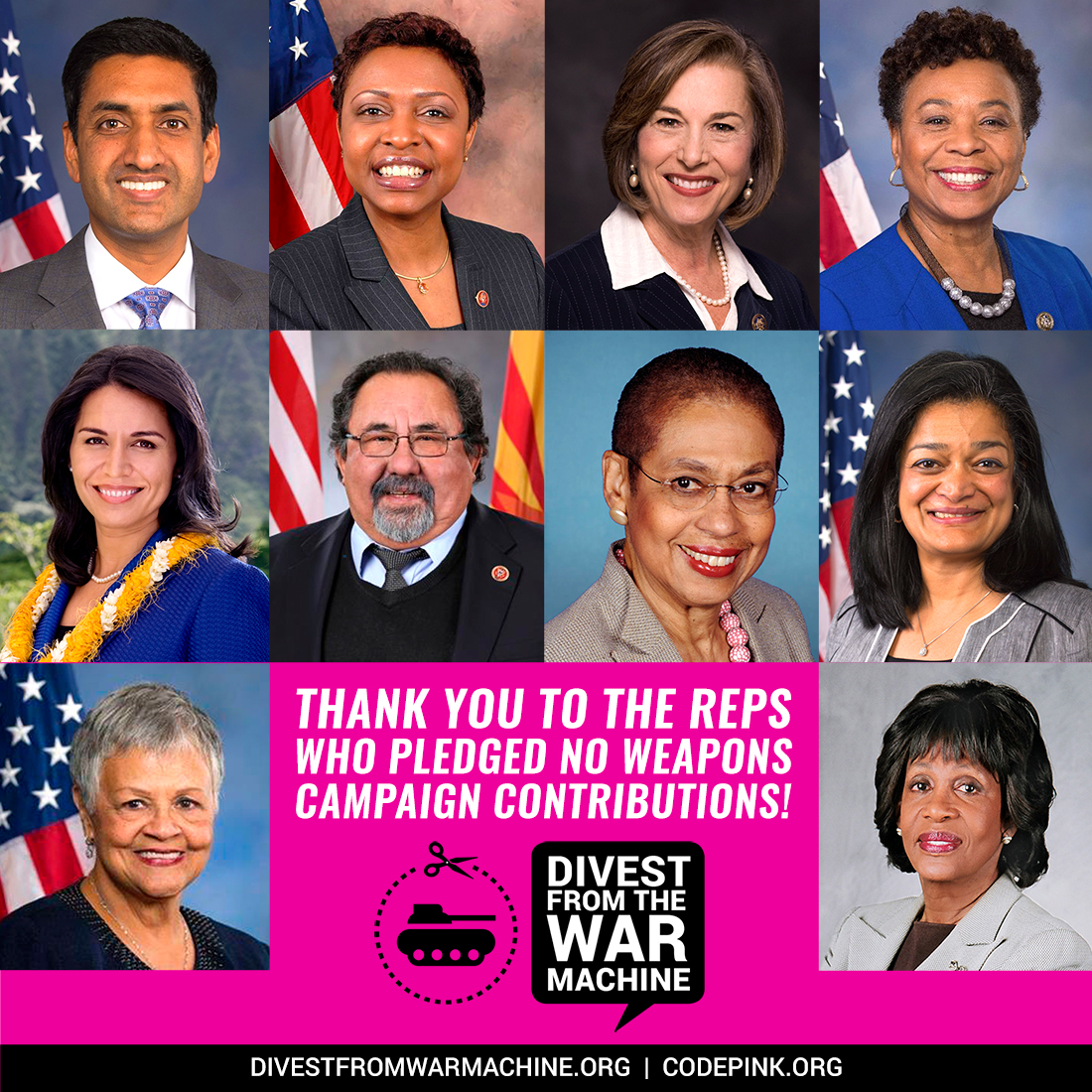 Since we kicked off this divestment work, eleven Representatives have pledged to not accept campaign donations from the top five weapons’ manufacturers: Lockheed Martin, Northrop Grumman, Raytheon, Boeing, and General Dynamics. Now that the Congressional landscape has changed, we need to ask new progressive members to sign the pledge. Let us know if you’re planning to approach your Representative, and we’ll follow up with them when they’re in D.C.

Santa Monica, CA and West Hollywood, CA led the way in city divestment from war and now Berkeley city council will vote on a divestment resolution next month and we’re optimistic it will pass. We hope neighboring Bay Area cities will be inspired to follow their lead and use our model resolution to divest their cities from war.

In Oregon, Governor Kate Brown and Treasurer Tobias Read are excited to divest the Oregon Public Employees Retirement System from war, but we’ve got to help them get there with a grassroots team. Do you live in Oregon and can you help? Email us at [email protected] and we can work towards a historic retirement system win!

Students at City University of NY have officially launched the #DivestfromDeath campaign to push their university to sever ties to merchants of death. Meanwhile, students at NYU just passed a resolution in their student senate to divest from all companies "involved in the violation of Palestinian human rights and human rights globally." The resolution specifically mentions Lockheed Martin and Boeing. Momentum for the divest from war movement is growing, and universities across the country have passed similar resolutions.

California Polytechnic State University (Cal Poly) students, who are shining a light on the deep ties between their school and Raytheon, among other weapons makers, are receiving threats from the school administration for a peaceful singing action at a campus career fair in front of Raytheon’s table. Please sign and share our petition demanding Cal Poly President Jeffrey D. Armstrong drop threats against the San Luis Obispo Peace Coalition students.

We have a lot of work to do to draw our universities away from supporting the war machine with their endowments, but Hampshire College is providing an instructive model. The college’s Policy on Environmental, Social, and Governance Investing instructs trustees to invest in life-affirming activities rather than death and destruction. 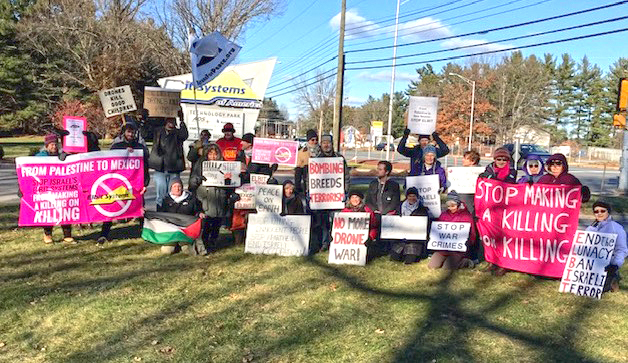 New England activists rallied in Merrimack, NH on December 7 outside Elbit Systems, Israel’s largest defense contractor which has offices and affiliations throughout the US. Elbit provides the Israeli Defense Forces with drones that are responsible for hundreds of deaths in Gaza and Elbit provided surveillance technology to Department of Homeland Security for militarization of the US-Mexico border since 2004. After the rally, activists delivered petitions calling on Senator Jeanne Shaheen of New Hampshire to reject campaign contributions from Elbit. In 2018, she received $10,000 from Elbit and over $300,000 from other military contractors. Sponsors of the day of action included Veterans for Peace, New England Palestine Education Project, Jewish Voice for Peace Boston, NH Peace Action, and  UVM Students for Justice in Palestine. Learn more at codepink.org/stopelbit

'Tis the season to divest from war! We continue to push BlackRock to divest from weapon manufacturers by holding protests across the globe and waging social media campaigns against its shareholders. We’re looking closely at Thrivent Financial’s holdings in BlackRock. Thrivent is a faith-based financial institute providing Lutherans with investment advice. In the spirit of the holiday season, we are encouraging Thrivent to invest in peace and divest from war profiteers BlackRock, Lockheed Martin, Raytheon, BAE Systems, Northrop Grumman, and General Dynamics. To learn more email [email protected]

Let’s take the momentum from successful war divestment wins in Santa Monica, West Hollywood, among eleven Representatives, and turn it into a network of wins across the U.S.!

Towards a peaceful future,
Maya and the CODEPINK Divest team