Did the US just send 1M medical masks to Israel??? 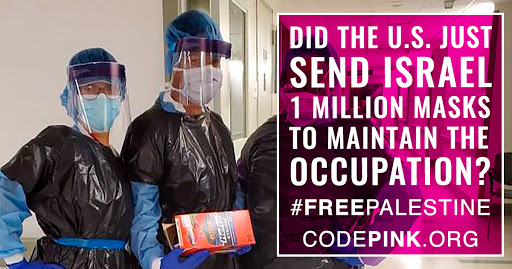 While healthcare workers on the frontlines of America’s COVID-19 pandemic are facing a severe shortage of Personal Protective Equipment (PPE), news has broken that the U.S. Department of Defense might be diverting medical masks to the Israeli military. Nurses in New York City and across the U.S. have to stretch one disposable N95 respirator mask throughout an entire work shift — up to 12 hours. In early April, nurses at Mount Sinai West hospital in Manhattan took pictures of themselves dressed in garbage bags because they had no medical gowns. Shouldn’t the federal government be getting PPE to them rather than to Israeli soldiers for an illegal and immoral occupation???

Contact New York Governor Cuomo and ask him to launch an investigation into whether the U.S. Department of Defense just supplied medical-grade masks to the Israeli military.

After you contact Cuomo, RSVP to join us on Monday, April 13 at 12pm ET for a live conversation from Bethlehem, Palestine with social worker and human rights activist Munther Amira. Munther will talk to us about how Palestinians are coping with COVID-19 under occupation, how violence against Palestinians by illegal Israeli settlers has increased by 78% over the past two weeks, and the urgent need to immediately release Palestinian political prisoners from Israeli prisons to protect them from COVID-19.

The story of the U.S. diverting medical masks to the Israeli military first appeared on Wednesday, April 7 in the Jerusalem Post. The "US Department of Defense gives 1 million [surgical] masks to IDF for coronavirus use," read the headline, referring to a shipment that had arrived at Ben-Gurion Airport the night before. It was also tweeted by Israeli army radio journalist Tsahi Dabush, who added: “Credit to US Department of Defense procurement delegates.” 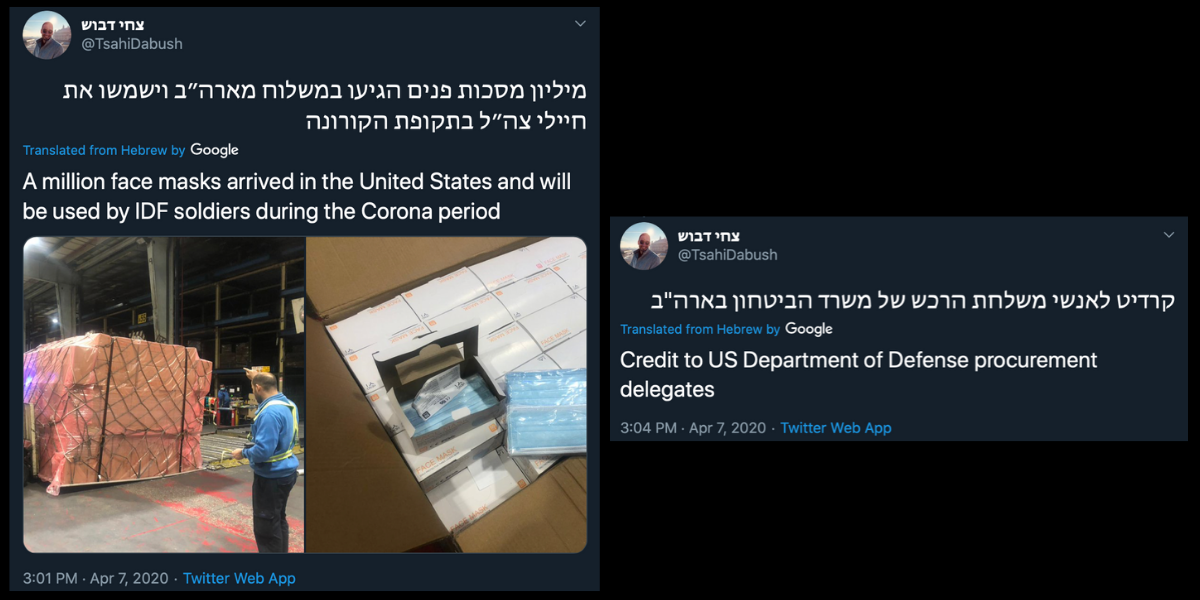 After the story received criticism, including by Palestinian-American journalist and friend of CODEPINK, Ali Abunimah, the Jerusalem Post altered their headline and content, erasing all mention of the U.S.’s involvement in the shipment. But no explanation was given for the change and Tsahi Dabush’s tweet remains, indicating the accuracy of the original story.

Governor Andrew Cuomo has described the process that New York and other states go through to procure masks and other medical equipment as being like an “eBay-style bidding war.” Across the U.S.,  citizens are being told to wear makeshift cloth face coverings because there are not enough medical-surgical and N95 masks for healthcare workers. The federal government giving masks to Israel for their occupation in the midst of such a crisis inside America is shameful and must be addressed.

Ask Governor Cuomo to launch an investigation into whether the U.S. Dept. of Defense did indeed divert one million masks to the Israeli army.  Then, plan to join us Monday, April 13 at 12pm ET, on YouTube Live and Zoom, for an in-depth discussion live from Bethlehem, Palestine, with Palestinian activist, social worker, and former political prisoner Munther Amira. RSVP now!

The Trump administration has been grossly mishandling the COVID-19 pandemic from the start. With funding cuts to the CDC, the elimination of the U.S. pandemic early warning program, low testing, minimizing the crisis, and more, America has quickly become the worldwide epicenter. As of today, April 10, 2020, one person dies every 45 seconds in the U.S. from the virus. American states, especially New York — the epicenter inside the U.S. — should not be forgoing essential PPE so that Israel can continue to violate Palestinian human rights. If the U.S. is at some point able to provide other countries with assistance to address the global COVID-19 crisis, it should be to the countries most in need.

Right now, more than ever, the U.S. must be fighting COVID-19, not Israel’s war on the Palestinian people. Ask Cuomo to investigate and join the conversation live from Bethlehem, on Monday.