Did Jamal Khashoggi die in vain? 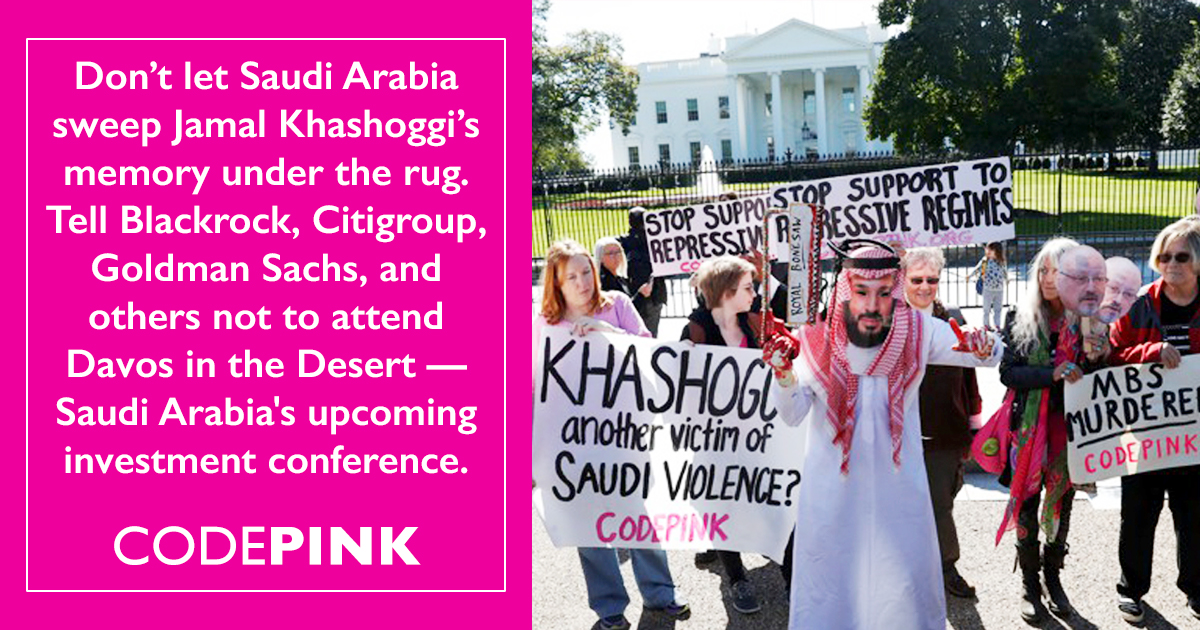 Today marks one year since the brutal murder of Washington Post journalist Jamal Khashoggi at the hands of Saudi Arabia, and the brutal regime is showing no shame as they try to sweep Khashoggi’s memory under the rug. At the end of this month, they are hosting an investment conference titled “Davos in the Desert” and have invited the world's biggest financial giants. Citigroup, Goldman Sachs, and Larry Fink, the Chairman and CEO of BlackRock, the world’s largest investor in the weapons of war have all RSVP’d yes.

We’ve long known that companies such as these don’t give a damn about human rights, but to appear in Saudi Arabia less than 13 months after a prominent journalist was lured into an embassy, murdered in cold blood, and then chopped into pieces and disposed of? That just rubs salt in an open wound. Help us call on Larry Fink and others to withdraw from the Davos in the Desert investment conference.

Last year, in response to Khashoggi’s murder, Blackrock and others — Google, Uber, JP Morgan Chase, CNN, The New York Times, and more — all pulled out of the conference. But now, with a year having passed, despite there still being zero accountability for those responsible, companies are trying to slip back in. Some, like Blackrock’s Larry Fink, have publicized their attendance, while others —- and we are hard at work right now trying to identify who — are trying to attend quietly.

NO COMPANY OR CEO SHOULD ATTEND DAVOS IN THE DESERT. Send a message now to Fink, Citigroup, and Goldman Sachs asking them to cancel. As soon as we find out who else is planning to attend, we will let you know so you can appeal to them also.

Even though Fink admits Khashoggi’s murder was “horrifying,” he is willing to overlook Saudi Arabia’s crimes against humanity — Khashoggi’s murder, the imprisonment and torture of women activists, the war in Yemen— as long as it furthers his company’s business ties, including the launch of a new BlackRock office in the kingdom.

Just this past Sunday Saudi crown prince Mohammed bin Salman (MbS) was interviewed on CBS’s 60 Minutes. He denied any personal involvement or knowledge of the murder of journalist Jamal Khashoggi who was chopped into pieces with a bone saw. This was despite CIA and UN intelligence that indicated that MbS was not only involved but likely the person who gave the order.

During his 60 Minutes interview, MbS also denied any knowledge of the torture of woman’s rights activist Loujan al-Hathloul who has been languishing in a Saudi prison since March 2018, saying Loujan's release is not up to him. But this is ridiculous, as Saudi Arabia is an absolute monarchy where MbS has knowledge of and controls every major decision, from the torturing of Loujan to the premeditated murder of Khashoggi. We call BS on MbS!

Saudi Arabia thinks that now that a year has passed since Khashoggi’s murder, that the world should close their eyes and ignore Saudi crimes. But MbS belongs at the Hague, not on 60 Minutes or hosting extravagant economic forums. Take action now by telling Larry Fink of Blackrock, as well as Citigroup and Goldman Sachs, to withdraw from the Saudi Davos in the Desert investment conference.

P.S. If you are in DC, join us and CAIR at 1 pm outside the Saudi Arabia embassy for a vigil and protest on the anniversary of Jamal Khashoggi’s murder, and read Medea Benjamin's latest article: One Year After Khashoggi’s Brutal Murder: Business as Usual?