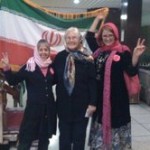 Jodie and I (CODEPINK co-founders) are spending the week in Iran on a citizen’s diplomacy visit, engaging with Iranian women’s groups and officials to build bridges and create peace from the ground up. We arrived Friday. Here’s a bit of our experience Saturday (bit of time delay in getting this up…sorry!)

What an extraordinary day! After arriving at our hotel in the middle of the night, I woke up early raring to go. Our hotel is in a great location downtown, and I took some time before our meetings to buy some beautiful crafts in the nearby stores and chat with the storeowners.

Our first meeting was with our dear friend Rostam Pourzal, who works with the anti-sanctions group CASMI. Rostam used to live in Washington DC, but moved back to Iran recently. Thank goodness he came to greet us, because it turned out that the government person who was supposed to set up our schedule today didn’t show up. So Rostam filled in the day for us with an amazing variety of activities and meetings.

First, he brought over a filmmaker, Habib Ahmadzadeh, who works on films that deal with the Iran-Iraq war. Habib took us out to a delicious lunch in a typical, old Persian restaurant where we ate scrumptious lamb, eggplant and kabobs. Then we went to his office, but along the way he stopped to show us the old, abandoned U.S. Embassy. It is now surrounded by murals with anti-American slogans—a stark reminder of the harsh rhetoric emanating from both governments.

In a screening room at his office, Habib showed us one of his beautiful films called Night Bus. It chronicled a fictionalized story that reflected Habib’s own odyssey as a teenage soldier during that war. An 18-year-old Iranian soldier ends up being in charge of transporting 38 Iraqi prisoners of war from the battlefield to an Iranian base. During the adventure-packed ride full of agony, betrayal and bonding, the Iraqi and Iranian men discover their common humanity. We were all weeping when the lights came on, and had a long discussion afterwards about the futility of war. Habib also showed us a short docudrama about the 20-year anniversary of the July 3 downing of an Iranian commercial airline by a US navy ship in which over 200 people died—a terrible tragedy for which the U.S. government has never apologized. There are so many sad pieces of our history that most Americans are unaware of, but that make us seem so callous in the eyes of the victims…

From there we went to a refreshing artists’ park, replete with a beautiful sculpture exhibit, art stores, and a café/vegetarian restaurant inside. Most of the people milling around looked like—and were—painters, writers, playwrights, filmmakers and poets. It was a cultural oasis, with conversations buzzing inside and outside. We added to the animated atmosphere by having a table full of people coming and going to meet and greet us. Most were called by Rostam, but a few—like a nuclear engineer Jodie met—just came by out of curiosity (yes, the pink does stand out).

Among those oining us for tea was a famous woman filmmaker named Rakhshan Banietemad, a woman who runs an eco-tourism company, a producer of plays, and several women who work for peace.

We were so thrilled by the conversation that we asked if any of them would be willing to be filmed. We decided that it would be great to ask Iranians from all walks of life to comment on what they would say to Barack Obama if they had the chance. Some of the women were afraid to be videoed, but Rakhshan, who was in a more secure position because of her prominence, agreed. So with the help of Habib as cameraman, I interviewed Rakhshan about US-Iranian relations and what could be done to move our countries toward a more peaceful path.

With so many incredible connections being made, our tea turned into dinner (which the Iranians refused to let us pay for) and we didn’t get back to the hotel until about 9:30 pm. But it turned out that the day was not yet over. At about 10:30pm, while I was checking email at the internet café, two of our dear young friends from the group Miles for Peace showed up. It was great to reunite after our time together in Washington DC. They are so bubbly, so hopeful, so creative, so loving. We heard about some of their upcoming ideas for youth exchanges with the US—soccer matches, swimming the Persian Gulf (!), a bike trip through Iran with 50 Iranian-Americans. All such terrific ideas. We will meet with the larger Miles for Peace group tomorrow evening.

Reflecting on the days’ events, I was struck by how much more open Iran is than I had thought. Yes, we have to wear headscarves and long coats, but that seems so unimportant --although I must say that I feel very claustrophobic covering my head all day. (During lunch at the restaurant, Rostam told me I could take the scarf off, but about 20 minutes later some men came to complain.)

I have been comparing the atmosphere here to that of Iraq under Saddam Hussein and here it is very different. People in Iraq were afraid to speak out against Saddam, people in Iran aren’t. While most wouldn’t want to be filmed venting against their government, they talk to us in an amazingly open fashion, barely looking over their shoulders to see if anyone is listening.

I suppose I shouldn’t jump to conclusions after one day, but the atmosphere is much more open than I thought it would be, and that in itself is reason for hope.