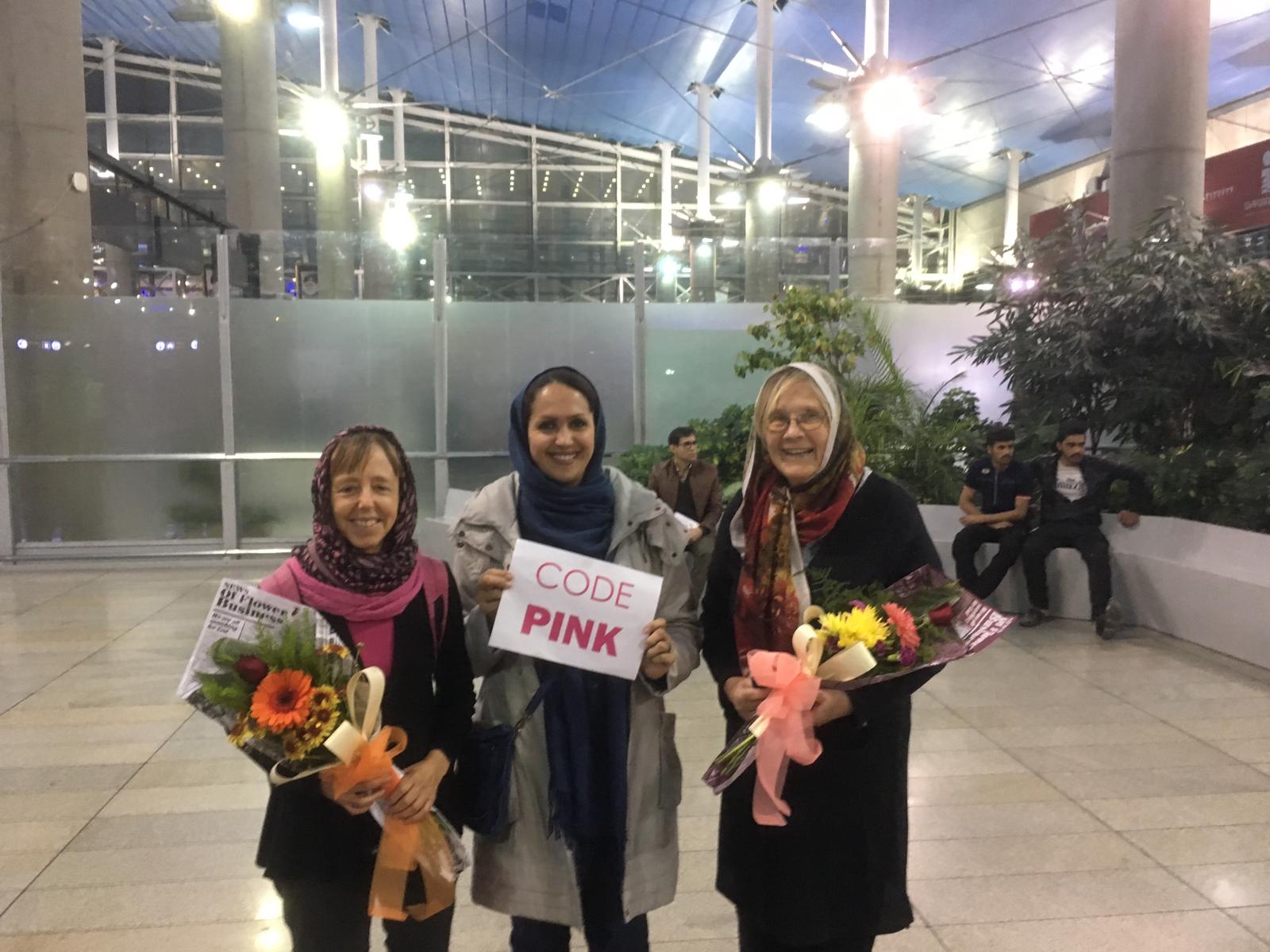 Medea and Ann arrived in Tehran on Saturday night February 23 at 9:30pm on the Qatar Air flight from Doha.  We began the journey 18 hours before from Dulles in Washington, DC with the long 12.5 hour flight to Doha, Qatar.  The landing route into Doha took us over Doha city with its skyscrapers emerging from the desert and massive new condos built around waterways from the gulf.   The four-hour layover gives one just enough time to see a part of Doha’s spectacular airport, one of the largest in the region.  In contrast to previous layovers was the lack of persons from Arab countries transiting.  The Saudi, UAE, Bahrain, Kuwait boycott of Qatar for its ties to Iran and the media company Al Jazeera was very evident--and was the air route into Qatar, with its detour over Turkey rather than the direct route which would have taken us over Saudi Arabia.

The flight from Qatar across the Persian Gulf to Iran and up to Tehran was a short 2 hours. The air map on the flight provides one with a glimpse of Iran's foreign policy challenges.  It has 7 countries that are its neighbors-Turkey, Iraq, Syria, Turkmenistan, Afghanistan, Pakistan and Armenia, with six more countries within 100 miles, Saudi Arabia, Kuwait, Bahrain, United Arab Emirates, Oman and Yemen.

In the past 25 years, from the 1991 Gulf War onwards, the U.S. been in military conflict in has flown in five surrounding countries: Kuwait, Afghanistan, Pakistan, Iraq, Syria and Yemen with the resulting deaths of hundreds of thousands in the region. With the extreme sanctions and war rhetoric from the Trump administration after its abrogation of the Framework Agreement, it is important that our citizen delegation come to Iran.

We were met at the Tehran airport with flowers by our guides for the trip-Farid, Sama, Reza and Shahram and taken to the Esteghial Hotel, the former Hilton hotel where we went over the schedule for the trip.

Flexibility is the thought for this trip.  Even though appointments with Foreign Ministry officials and Parliamentarians have been requested, our hosts asked us to be patient as many times, the appointments are not confirmed until delegations actually arrive--apparently in recognition that even though the laborious task of getting the approval of many elements of the Iranian government for the visas succeeded, there are still challenges within the government to determine which appointments will be given.

Our guides mentioned that the schedules for visitors from the ABC countries (America, Britain and Canada) receive special attention from the government due to the less than friendly current relations, and they asked for our patience as they readjust the itinerary daily depending on which appointments come though.  With plenty of beautiful sites to see in Tehran, our days with meeting civil society, women, student and other groups will keep us busy.

Medea and I will be meeting today with the coordinator for our conference with faculty and students at Tehran University tomorrow.

The remaining 26 in our delegation arrive in two separate groups evenly split between Turkish Air and Qatar Air.  By 3am Monday morning our entire delegation will be in Tehran and we will set off to learn about many aspects of life in Iran under the brutal sanctions the U.S. and international community have placed on Iran, despite its compliance with the terms of the Joint Framework Agreement.

(my name pronounced as Ann has a bad connotation, so here in Iran, just call me a “On.”