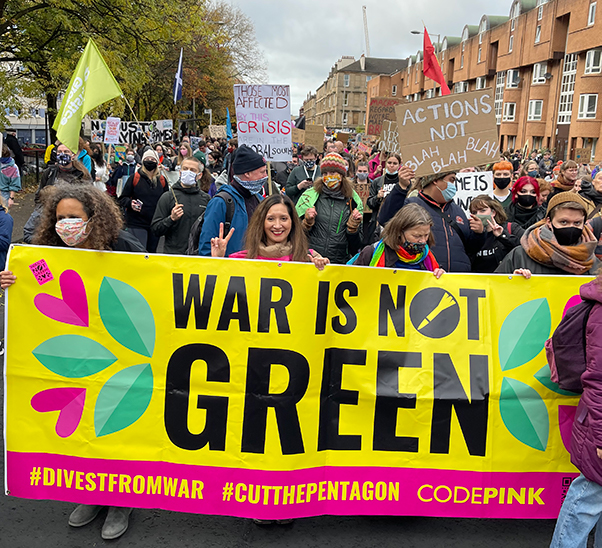 Militarism and the climate crisis are intensely intertwined, which is why we could not let world leaders, the Pentagon, and companies like BlackRock continue to neglect this fact year after year when discussing climate change solutions at the COP26. CODEPINK cofounder Jodie Evans and campaign organizers Nancy Mancias and Suzie Gilbert traveled to Glasgow, Scotland, where the COP26 took place, demanding that the United Nations climate conference stop excluding military greenhouse gas (GHG) emissions from the talks. We successfully collaborated and co-created actions and events with organizations from the US, UK, Scotland, Europe, and Nigeria to advance the discussion on the intersectionality between climate and militarism.

👉🏽 Read my blog about our actions in Glasgow at COP26.

Thanks to Veterans for Peace’s Climate-Militarism Project and their collaboration with CODEPINK, Rep. Barbara Lee has introduced legislation to press for accountability of the world's largest institutional source of greenhouse gas emissions, the U.S. military. If the resolution— a sense of the House, is passed, it would call on the U.S. military to "monitor, track, and report greenhouse gas emissions from all its operations, including combat operations, deployments, drone attacks, weapons production, and testing, and base construction and functions.” It would also recommend the U.S. Defense Department "set clear annual greenhouse gas emission reduction targets for both domestic and foreign activities that are consistent with the 1.5-degree target specified by the 2015 Paris agreement."

👉🏽 Email your representative and tell them to join Barbara Lee!

We heard first-hand accounts about how the US military is hurting and harming Indigenous people and their land. Listen to our partner Sheila Babauta with the Micronesia Climate Change Alliance, Mariana Islands. While the US military is destroying Indigenous land, US politicians dare to approve billions of dollars to fund the Pentagon, essentially handing a blank check to the world's single largest polluter, which causes more greenhouse gas pollution than 140 other nations combined.

President Biden's plan to cut greenhouse gas emissions will fail if he and members of Congress do not address the US military's contribution to climate change. It's the elephant in the room! In addition, Biden's crazy claims to reverse deforestation rings hollow. He defends the Line 3 pipeline project, which funnels thousands of barrels of oil through Minnesota's delicate watershed. The pipeline construction has decimated the surrounding forests.

We need less BLAH BLAH BLAH* and more action from the US government. Tell your Representative to join Barbara Lee’s amendment to hold the U.S. military accountable for their gross carbon impact.

As COP26 draws to a close, we know that hyper-militarization is everywhere—including in our very own neighborhoods. We know that our work is not done. We have only scratched the surface and will need to burrow through to the other side. Nevertheless, we can say that our presence at the COP26 successfully brought attention to this issue.

🌎 For a world without weapons!
Ariel, Jodie, Nancy, and Suzie

P.S. You can buy your very own "Imagine a world without weapons" t-shirt" or our brand new floral t-shirt, now available on our online store!