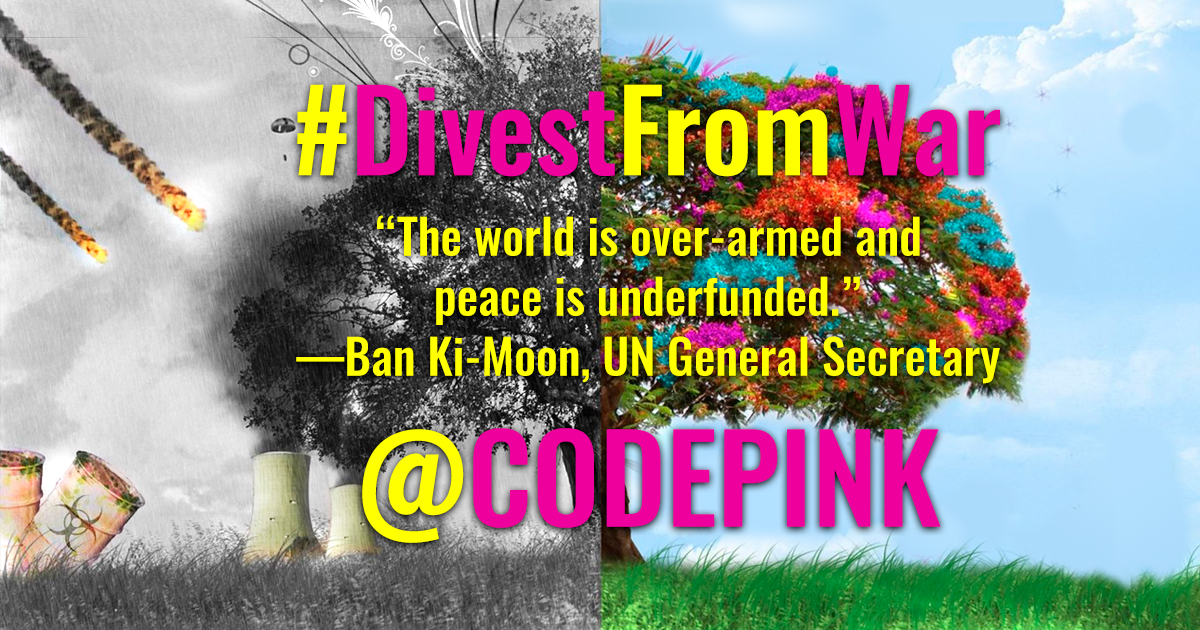 As Trump waffles about whether to proceed with an illegal strike on Syria, the racist war hawk Mike Pompeo sits in front of the Senate, expecting to be confirmed as Secretary of State. If confirmed, he’ll join John “To Stop Iran, Bomb Iran” Bolton in Trump’s new War Cabinet. Together, we can be sure they’ll continue escalating America’s fatally flawed practices of interventionist militarism and imperialism — at a time when we desperately need a return to diplomacy and negotiations.

Join us this week in New York during Spring Actions 2018 to say enough is enough.

On Sunday, April 15, meet in Herald Square at 2pm for a rally and march to Trump Tower. CODEPINK co-founder Medea Benjamin will be among the speakers demanding that we end the wars at home and abroad. Look for the CODEPINK banner and join us for the march — don’t forget to wear your PINK!

Then on Friday, April 20, join CODEPINK co-founder Jodie Evans and Divest from the War Machine organizer Rita O’Connell for a teach-in on Divest and our campaign against BlackRock! BlackRock talks about corporate responsibility, but it continues to invest in companies that build weapons of war which cause devastation throughout the world. We’ll meet at the Starbucks at 55 E 52nd Street — inside the atrium at the BlackRock building— from 12:30–1:30pm, to talk about how we’re holding BlackRock accountable as we call on them to #divestfromwar.

We must pursue ceasefires and diplomacy instead of endless war. We must demand that our governments and investors stop making a killing on killing. And we must dismantle the war economy, choosing instead to invest in human freedom and dignity.

In pursuit of peace,
Jodie, Rita, Medea, Sarah, and Nancy