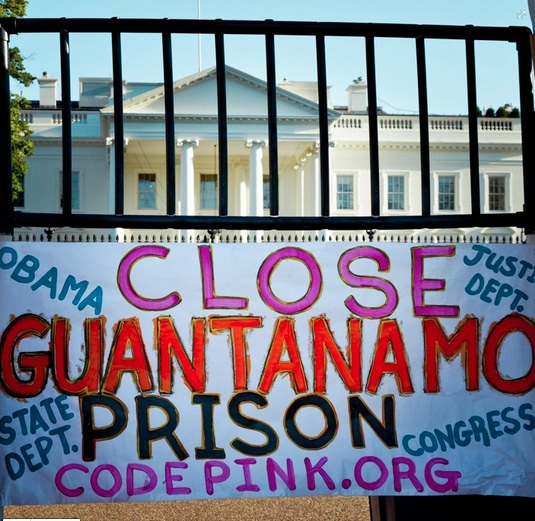 “Release prisoners in Guantanamo who have been cleared for release and try the others in federal courts in the United States. Arrest and put on trial U.S. personnel who engaged in torture in Guantanamo or “black sites” in other countries. Close Gitmo.”

Since January 11, 2002, 780 detainees from dozens of countries have been brought as “enemy combatants” to Guantanamo Bay Detention Camp. These prisoners have been held in indefinite detention, denied their right to due process, and subjected to torture, including sexual abuse, waterboarding and force-feeding. Nine have died in custody; many have protested their inhumane conditions and lack of legal remedy by hunger-striking. Most have been released, either to their home countries or to third countries, without ever being charged. As of Spring 2016, 91 men are still being held, at a cost of approximately $5 million per prisoner, per year.

CODEPINK has long protested the horrors of the place nicknamed “Gitmo” and we call for its closure, including on our trips to Cuba. See this webpage for more info and for actions you can take to close Gitmo before the end of the Obama presidency.

For our allies on this set of issues: please see under “Accountability” here.

For photos of CODEPINK protesting Guantanamo and torture: http://bit.ly/24s7Fse