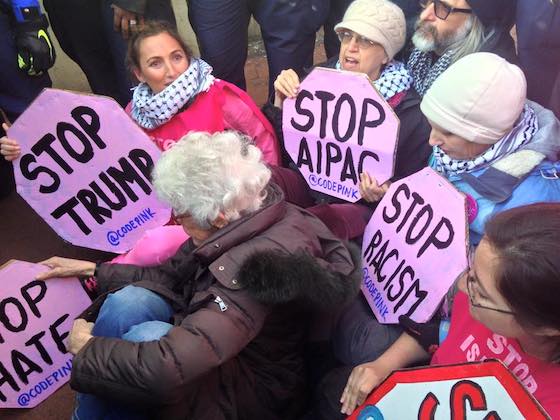 A few weeks ago CODEPINK launched a petition asking Democratic presidential candidate Bernie Sanders to reject the American Israel Public Affairs Committee (AIPAC) invitation to speak at their annual policy conference in Washington DC. About a week later, Sanders announced that he was skipping the conference! Sanders is the only presidential candidate in American history to have declined an invitation to speak at AIPAC. Shortly afterwards, Sanders released a statement to AIPAC in which he expressed empathy for Palestinian suffering and promised, if elected, to be a friend to both Palestinians and Israelis.

While we applaud Sanders for skipping the American Israel Public Affairs Committee conference and for his commendable statement in recognition of Palestinians’ human rights, we also know that more is needed. This is why while Donald Trump was inside addressing AIPAC, CODEPINK was outside protesting and engaging in civil disobedience.

Read about and watch why CODEPINK’s Ariel Gold chose to get arrested at the AIPAC conference.

The struggle for justice in Palestine has seen a lot of wins lately. Along with Sanders heeding our call to reject AIPAC, the month of March saw numerous wins in the Boycott, Divestment, and Sanctions (BDS) movement, including a massive victory for CODEPINK’s Ahava campaign.

We know that when we fight, we win. That is why we are keeping the pressure up. CODEPINK is proud to be part of the Stolen Homes campaign asking Airbnb to stop listing homes in illegal Israeli settlements. Check out this mock website and leave a review telling Airbnb that they should abide by international law.

Together we can bring peace and equality to all people in Israel/Palestine.

Toward a just peace,