CODEPINK Delivers Petition to US Ambassador to the UN, Samantha Power, Urges Ceasefire for Syria 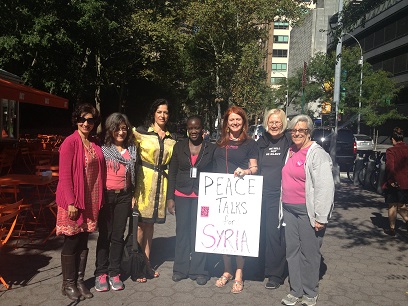 Today CODEPINK successfully delivered a petition with over 3,000 signatures to the office of Ambassador Samantha Power’s, the US mission to the UN in New York. The petition urges Ambassador Power to push for a ceasefire for Syria during the Geneva II Convention.

The women who delivered the petition included CODEPINK Campaign Organizer Nancy Mancias, CODEPINK Co-founder Jodie Evans, retired Army Reserve Colonel Ann Wright, NY Director of the Nuclear Age Peace Foundation Alice Slater, and many others. They were met by Ghada Mukdad of the Syrian Women’s Forum, and together they delivered the petition to the press officer of the US Mission to the UN, Kurtis Cooper.

Mukdad is originally from Syria and now resides in Dallas, Texas, where she works closely with CODEPINK Dallas Coordinator Leslie Harris. She will not go back to Syria right now because the situation there is still so tumultuous.

The women sat down and talked in depth with Mukdad. She is looking for support in bringing peace to Syria. “If the US cared about the Syrian women and children," she said, "they would not even think of bombing but would support the refugees, stop funding weapons and use their power to bring the factions to peace talks.”

The CODEPINK petition calls for a ceasefire and diplomatic resolution, and emphasizes the need for the US government to focus on humanitarian aid to the millions of Syrian refugees. The UN request for refugee assistance is still 60 percent underfunded. We call on Ambassador Power to push for an increase in US aid to the United Nations High Commission on Refugees as part of our effort to help the Syrian people in their time of great need.

Mukdad is passionate about the cause and is scheduled to speak in Washington, D.C. September 19, 2013. CODEPINK will continue to support Mukdad and the women in the Syria refugee camps. If you would like to take action with us please make a donation to send solar lamps to Syrian Women in refugee camps.

Due to popular pressure from CODEPINK and activists across the nation, we were able to temporarily avert a US military strike on Syria. However, that doesn't mean that military option is off the table. We must continue to stand strong and keep putting pressure on Congress and President Obama- we can't stop bloodshed with more bloodshed.