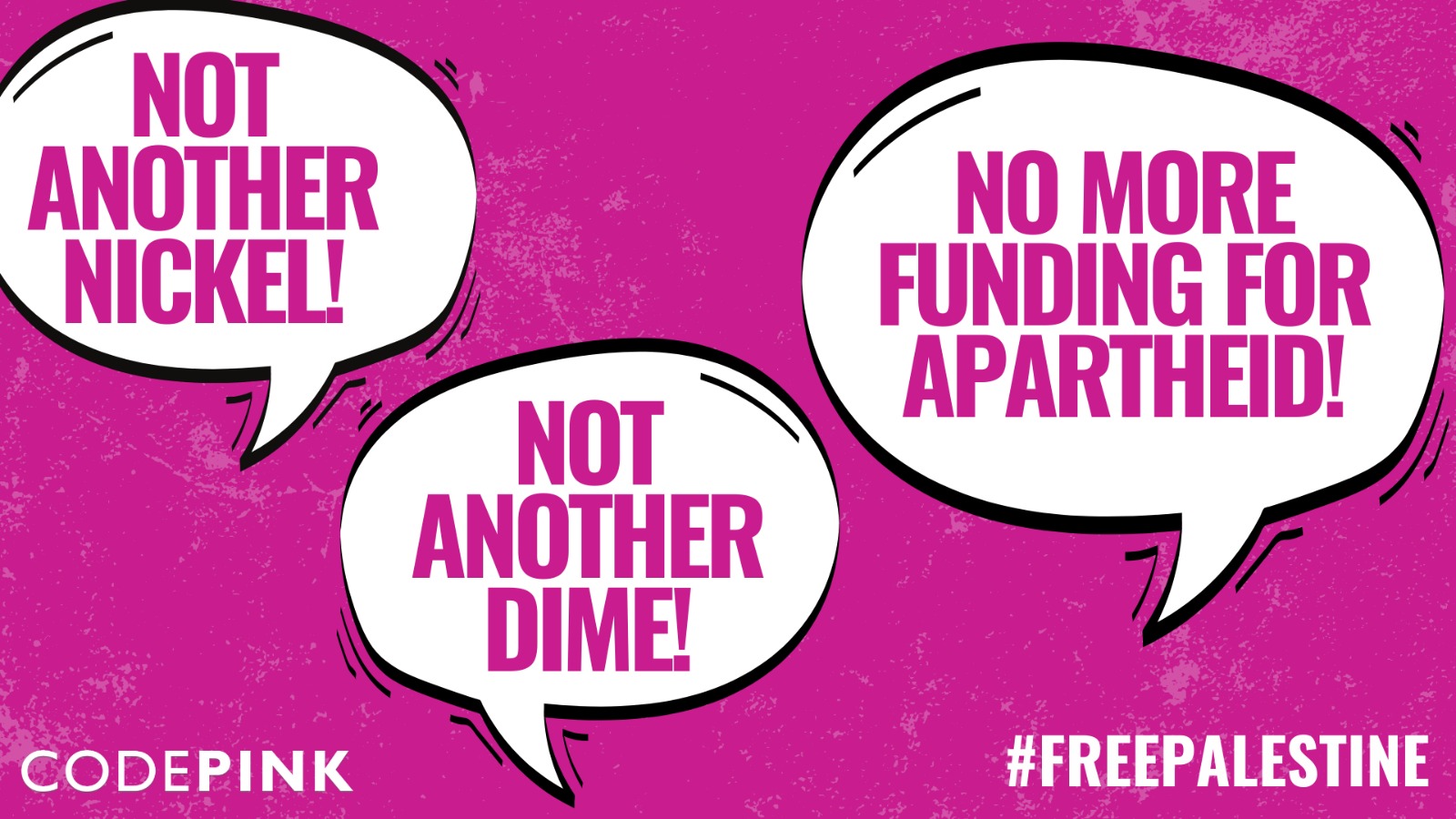 September 22, 2021 — The anti-war group CODEPINK applauds the stripping on September 20 of $1 billion to replenish Israel’s Iron Dome system from a draft continuing resolution on funding. “The United States already provides $3.8 billion annually to Israel, which is used to terrorize, oppress, and bomb Palestinians,” said CODEPINK national co-director and Middle East analyst Ariel Gold. “Removing an additional $1 billion for Israel is an incredible success towards our goals of ending the blank check and impunity that Israel, an apartheid state, has enjoyed for far too long.”

The $1 billion in emergency aid for Israel was promised by the U.S. after Israel’s May 2021 war on Gaza that killed over 250 people, including 67 children. It was removed after progressive lawmakers Alexandria Ocasio-Cortez, Ilhan Omar, Rashida Tlaib, Ayanna Pressley, and Pramila Jayapal threatened to vote against the key funding bill if the $1 billion wasn't removed. Israel is still very likely to receive the $1 billion either as an attachment to the 2022 Defense Appropriations bill or through the stand-alone legislation that majority leader Steny Hoyer introduced after the $1 billion was removed. Regardless of this, the message has now been sent to Israel that their days of enjoying unquestioned support from the U.S. may be numbered.

“Just like Israelis, Palestinians deserve to live in safety and security. $500 million of the $3.8 billion Israel receives is already dedicated to funding the Iron Dome,” said Ariel Gold. “While Israel is able to use its Iron Dome to shoot down missiles from Gaza, Palestinians in Gaza have no such protection from the massive bombs that Israel drops on civilian populations. Human Rights Watch and the Israeli human rights organization B’Selem have determined that Israel meets the criteria of being an apartheid state. Activists have been fighting for years to remove U.S. support for Israel in order to pressure Israel to end its apartheid policies and occupation of the West Bank, East Jerusalem, and Gaza. We will continue our advocacy and action until the goals of freedom, dignity, and equality are achieved for all in Palestine/Israel.”