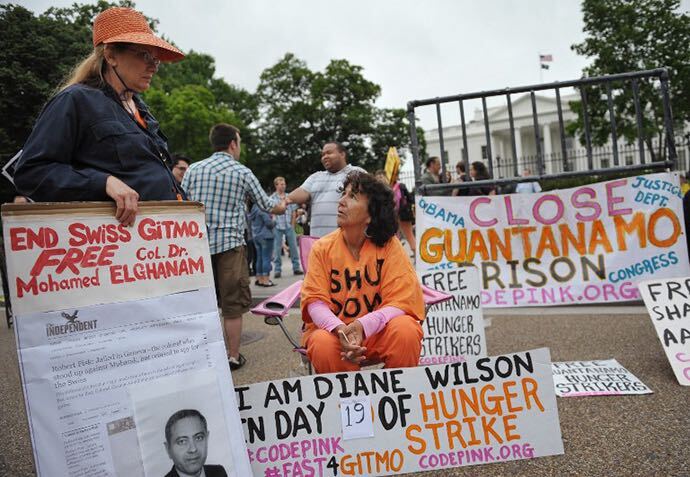 CODEPINK and allies will gather in person in Los Angeles, Berkeley, New York City and Washington D.C. on  January 11, 2023 to call for the closure of Guantanamo Bay Detention Camp and an immediate release of all its detainees.

At its peak, the illegal detention center at Guantanamo Bay held some 800 men and boys of Muslim faith - most of whom were never charged with a crime. Today, 36 prisoners still languish there. All accused of being terrorists or terrorist affiliates; US officials act as if it is a coincidence that they are all Muslim. As put by Maha Hilal, Guantanamo Bay is an “enduring symbol of US Islamophobia”.

“For the war on terror to really come to an end, GITMO must be closed immediately and detainees returned to their families.” Danaka Katovich, CODEPINK Co-Director continued, “No President can pretend to care about democracy while keeping a torture blacksite like Guantanamo detention camp up and running.”

CODEPINK resisted GITMO and called for its closure for twenty years. Member Diane Wilson went on a hunger strike outside the White House, and jumped over the White House fence to call attention to the American-run torture camp in 2013.