Can't join us to protest Trump or Clinton? Join us online! 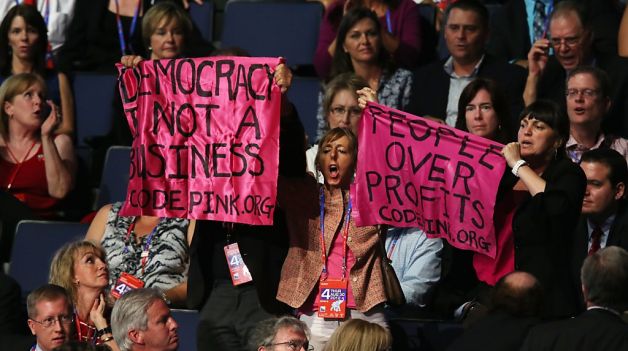 We’ll be travelling to Cleveland tomorrow to be at the People’s Justice and Peace Convention this weekend and to prepare for events at the Republican National Convention next week. We’ve got lots of creative, non-violent direct action planned and we’d love to have you join us!

Check out our schedule for the RNC and let us know if you’ll be there to join us!

Some highlights of our planned actions include:

Saturday & Sunday, July 16 & 17, we'll be at the People's Justice & Peace Convention!
Medea Benjamin will be delivering a keynote speech on Sunday night during this convention of justice, peace, environmental and democracy activists. CODEPINK National Director Alli McCracken will be part of a workshop on the US role in Israel-Palestine and CODEPINK's Chelsea Byers will be part of a workshop titled "Challenging Militarism and the Military-Industrial-Congressional Complex."

Sunday, July 17, we Shut Down Trump and the RNC!
March with us against racism, Islamophobia, attacks on immigrants and LGBTQ people and endless war! We'll be dressed as Lady Liberty to say that Trump’s America is not the kind of country we want to live in, and we love our neighbors! We’ll say: Refugees Welcome! Immigrants Welcome!

Wednesday, July 20, we hold the No Beauty in Hate Pageant!
Donald Trump is well known for his notorious beauty pageants, so we’re going to bring our own version to the doorstep of the RNC with messaging about what Trump’s America would look like. Hint: It’s not good!

Check our schedule, see when you can join us and be a part of our contingent at the RNC! Let us know when we’ll see you in Cleveland here.