Can Tillerson save the day? 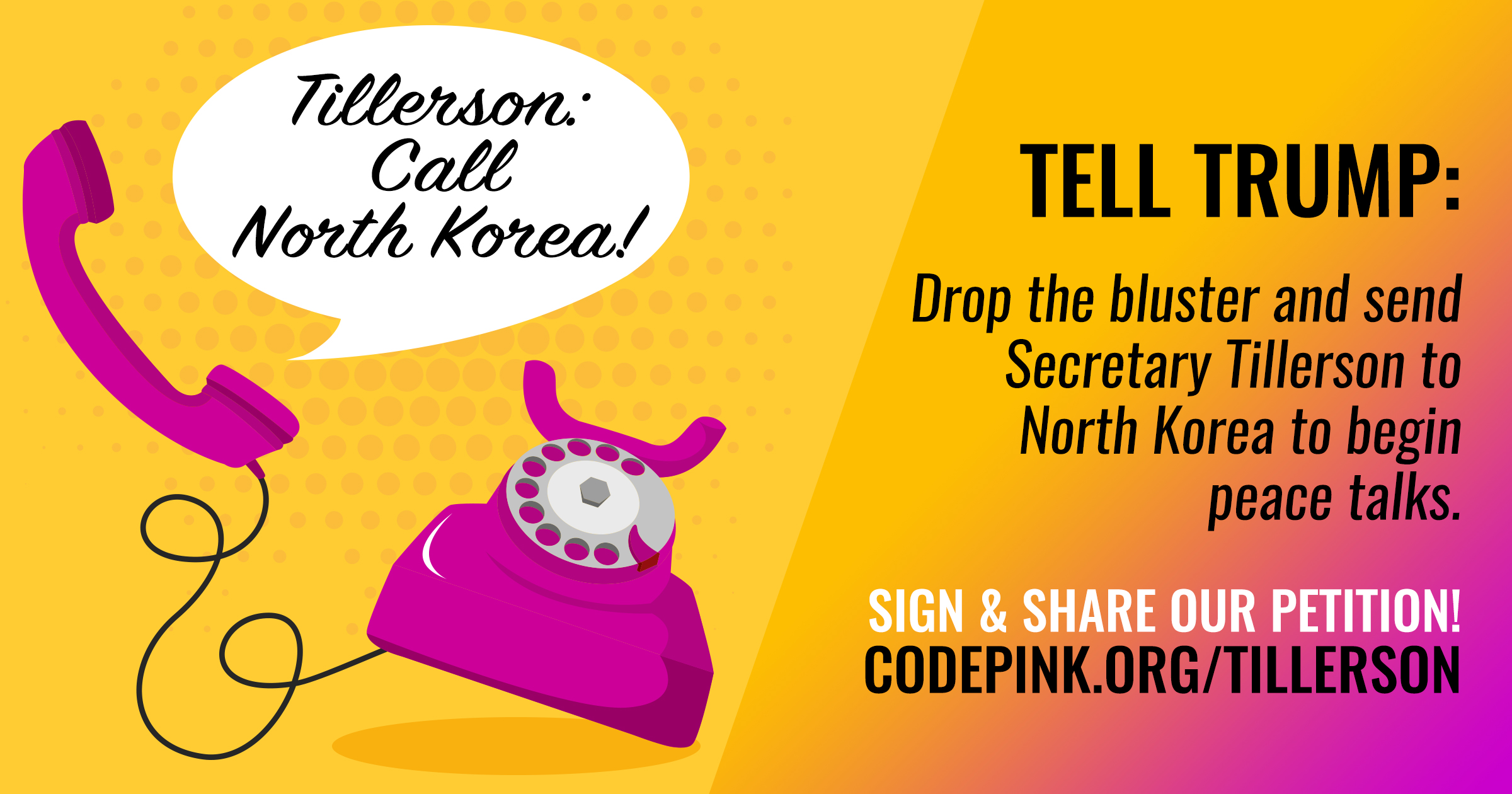 Two years ago, I crossed the world’s most fortified border from North to South Korea with 30 women from 15 countries calling for a peace treaty to formally end the Korean War.

Today, many of the American women on that journey, feminist author Gloria Steinem, retired U.S. Army Colonel Ann Wright, and CODEPINK’s Medea Benjamin would have their passports revoked because the Trump administration just passed a U.S. travel ban to North Korea.

With tensions at its worst today, it’s time for a bold initiative by those with the power to move forward a peace treaty. Rex Tillerson recently said: “We would like to sit down and have a dialogue with them.” Tell President Trump to send Secretary of State Rex Tillerson to North Korea.

This initiative would get broad public support. According to a May Economist poll, 60 percent of Americans, regardless of political affiliation, support direct negotiations between Washington and Pyongyang.

South Koreans support talks, too. According to a  June poll, 80 percent of South Koreans want inter-Korean talks. And on July 7, South Korea’s new and very popular President Moon declared, “I am ready to meet with North Korean leader Kim Jong-un at any time and any place.”

With North Korea’s nuclear weapons program and its recent tests of intercontinental ballistic missiles that may reach the United States, there is an urgent need to break the cycle of threats and testing. What are the options?

U.S. military and economic pressure on North Korea—sanctions, provocative war games, and deployment of the THAAD missile system in South Korea—have not and will not work. North Korean leader Kim Jong-un says such threats “only strengthen our resolve and further justifies our possession of nuclear weapons.” A pre-emptive U.S. strike? Even U.S. Secretary of Defense James Mattis has said that a war with North Korea would be “catastrophic.”

The Chinese, echoing an old proposal from the North Koreans themselves, have called for “a freeze for a freeze”—North Korea would freeze its nuclear and missile testing in return for the United States and South Korea freezing their annual military exercises.

William Perry, former U.S. Secretary of Defense who stopped North Korea’s nuclear weapons program for eight years, said, “If it was as simple and straightforward as that—we stop exercising, they stop testing, nuclear weapons and missiles—then I think the answer should be ‘yes,’ … in conjunction with the South Korean government."

But are North Koreans ready to talk? On many occasions, they have called for negotiations. On August 1, The New York Times editorial writes: “American experts who study the issue say there have been repeated signals in recent weeks that they may be. That can’t be known, however, unless someone goes and asks them.”

The editorial concludes that Trump should “drop the bluster and dispatch Secretary of State Rex Tillerson.” We agree wholeheartedly. Give Tillerson the opportunity to show us he’s a diplomat with the courage to make the peace deal of the century. And don't forget to share this message on Facebook and Twitter!