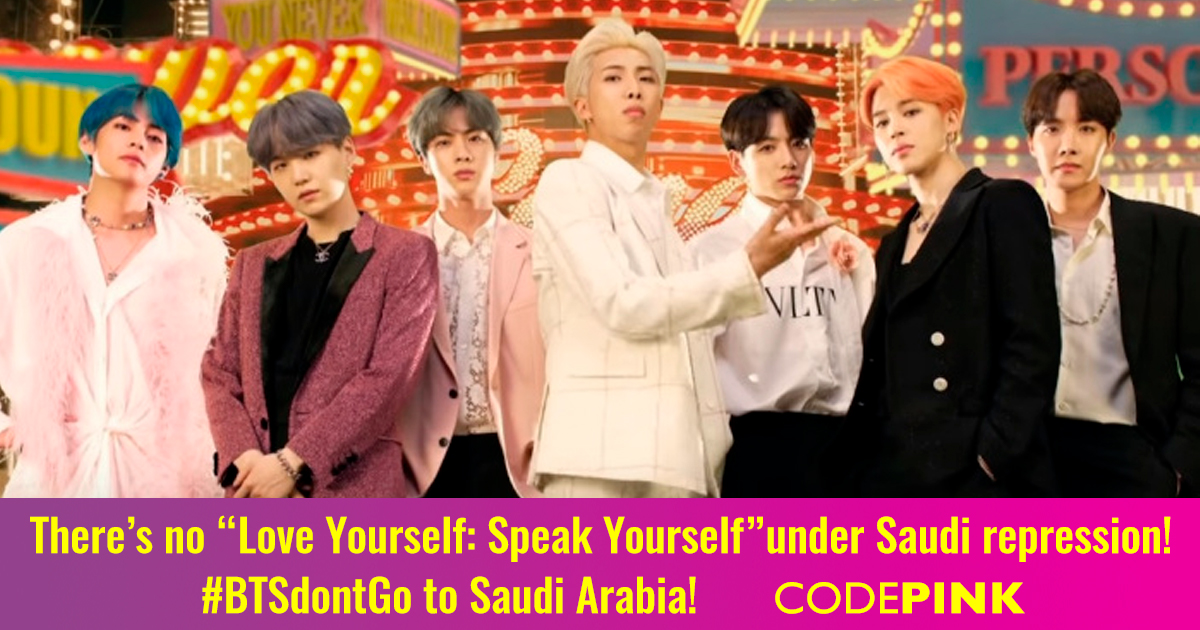 The 7-member South Korean boy band BTS, also known as the Bangtan Boys, is one of the hottest musical performance acts on the planet right now, topping US and world charts and becoming the first group since The Beatles to earn three number one albums in less than a year. BTS lyrics address social issues like mental health, loss, self-love, and the troubles of school-age youth. Given all their attention to youth empowerment, we can only assume they don’t know about the situation of Yemeni children, who are literally dying of starvation as a result of Saudi Arabia’s bombing campaign. Help us send a message now to the BTS asking them to cancel their October 2019 performance in Saudi Arabia.

As you might have heard, hip-hop artist Nicki Minaj just canceled her performance at the Jeddah festival in Saudi Arabia after learning about the terrible human rights abuses there. “While I want nothing more than to bring my show to fans in Saudi Arabia, after better educating myself on the issues, I believe it is important for me to make clear my support for the rights of women, the LGBTQ community and freedom of expression,” she said. We are asking you to please follow Nicki’s example by canceling your upcoming performance in Saudi Arabia.

Your positive message calling on people to love themselves and to speak out could easily land you in prison in Saudi Arabia--and get your beheaded. A young Saudi blogger Raif Badawi, who was speaking for himself by calling for a more open, liberal society, has been languishing in prison on a 10-year sentence. The Saudi regime just beheaded 37 people, including three young men arrested as juveniles for taking part in peaceful protests.

Saudi Arabia does not allow LBGTQ+ individuals to be who they are — just three months ago Saudi Arabia executed five men for the “crime” homosexuality after exacting confessions from them through torture.

Thousands of children in neighboring Yemen are dying because of Saudi bombs and the consequences of war. Since 2015 Saudi Arabia has been waging a war on Yemen so brutal that some 85,000 children under the age of five have died of hunger and more continue to perish every day. According to the UN, every 10 minutes a Yemeni child dies from war and hunger.

Saudi Crown Prince Mohammed bin Salman has still not been held accountable for the barbaric murder of Washington Post journalist Jamal Khashoggi, whose dead body was chopped up with a bone saw.

Though Saudi women have recently seen a small increase basic rights, the very women who campaigned for the right to drive in Saudi Arabia have been arrested, imprisoned, and tortured -- electroshock, beatings, sexual harassment and waterboarding. Under the oppressive male guardianship system, women in Saudi Arabia need permission from a male to travel, study, obtain a passport, marry, and engage in other life events.

We hope you will follow Nicki’s lead and cancel your show for the sake of Yemeni children, the LGBTQ community, Saudi women, journalists, and anyone seeking to love themselves and speak for themselves.