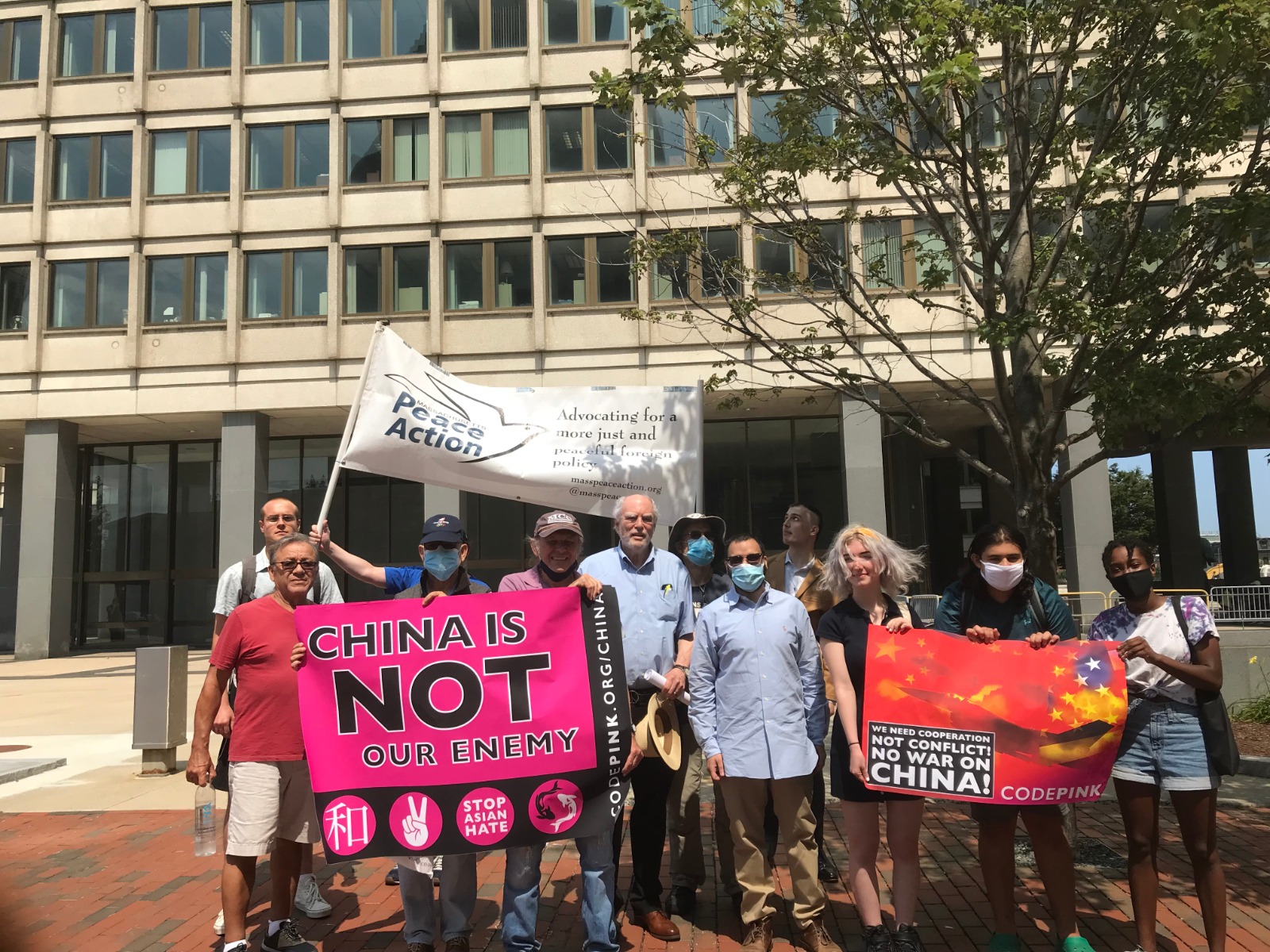 As a member of the Senate Foreign Affairs Committee, Ed Markey voted the wasteful and climate-damaging anti-China Strategic Competition Act out of committee and to the floor of the Senate for a vote. Then on June 8th 2021, he voted for it again, this time as part of the massive U.S. Innovation and Competition Act (S. 1260).

The U.S. Innovation and Competition Act would allocate over $8 Billion of our tax dollars to the Department of Defense, with over $875 Million of that funding going directly to military training in the Asia-Pacific training. All of this additional military spending goes against Senator Markey’s recent campaign promise to cut Pentagon spending and reduce greenhouse gas emissions, as the U.S. military is one of the largest polluters in the world. Furthermore, the bill includes half a billion dollars for U.S. propaganda that demonizes China and endangers Asians and Asian Americans, undermining Markey's support for racial justice. 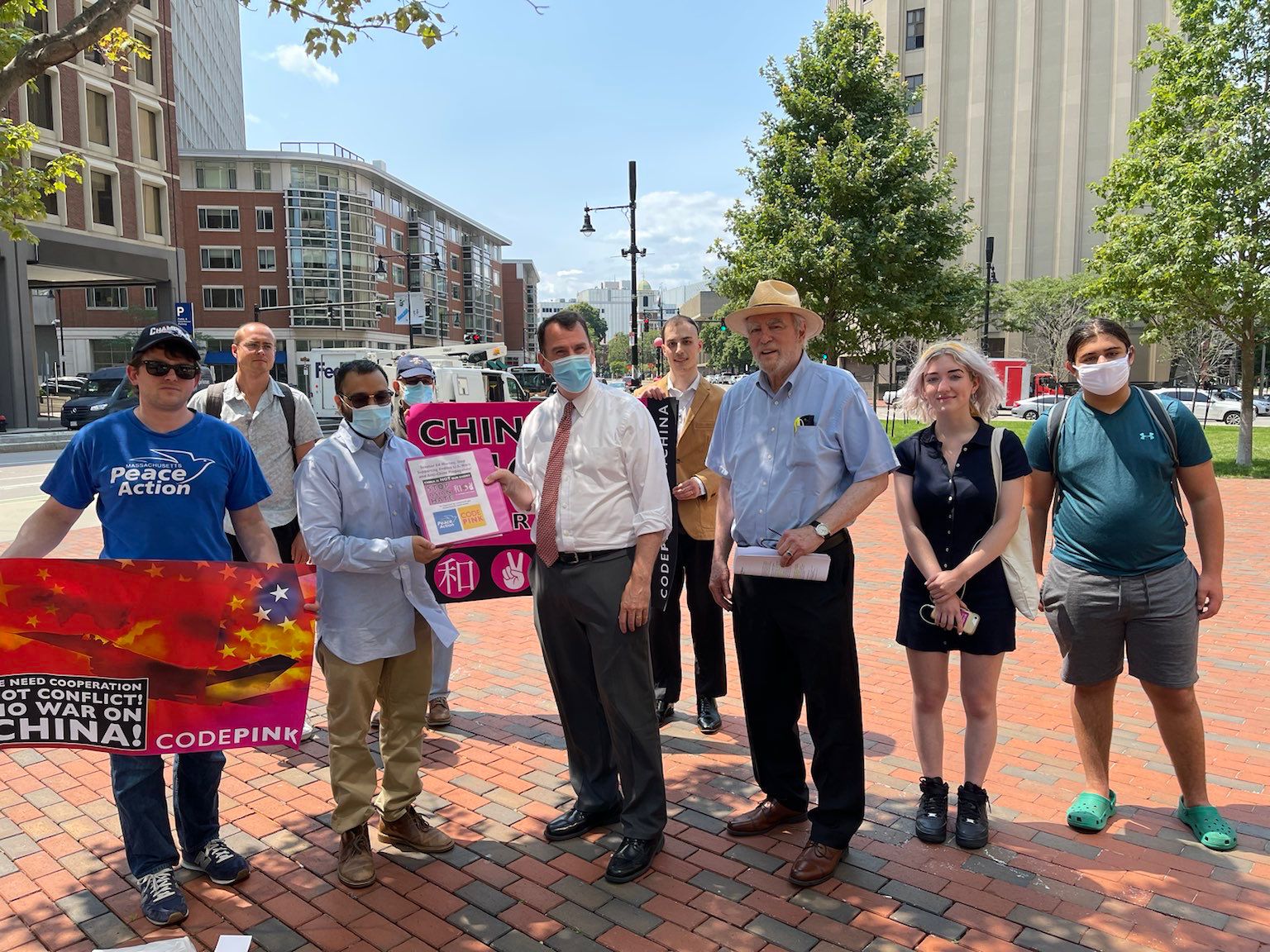 The joint action highlighted the intersecting issues of climate, militarism, nuclear abolition, and racial justice. Activists like Joseph Gerson — president of the Campaign for Peace, Disarmament and Common Security, Vice President of the International Peace Bureau, and Director of Programs and Director of the Peace and Economic Security Program for the American Friends Service Committee — and Brian Garvey, organizer with Mass Peace Action, stressed that humanity faces pressing existential crises: the increasing dangers of nuclear war, the climate emergency, and global health pandemics, all of which will require U.S.-China cooperation if they are to be adequately addressed.

@BrianMGarvey & @masspeaceaction give Sen. Markey credit bc he has identified the 2 existential threats to the human race—climate change & nuclear war. "We are here bc we don’t think it’s possible to fight climate change or pursue nuclear disarmament & be antagonistic to #China" https://t.co/nMPYTOhVuo

The coalition's demands for Senator Markey moving forward are that he end his support for anti-China focused militarism like that in U.S. the Innovation & Competition Act and the Asia Reassurance Initiative Act, stop undermining Climate Envoy John Kerry's climate deal with China and instead promote cooperation with China on clean energy initiatives, defund nuclear modernization and proliferation from the Pentagon budget, remove the anti-China Pacific Deterrence Initiative from the Pentagon Budget, and stop supporting funding for propaganda that endangers Asian Americans. 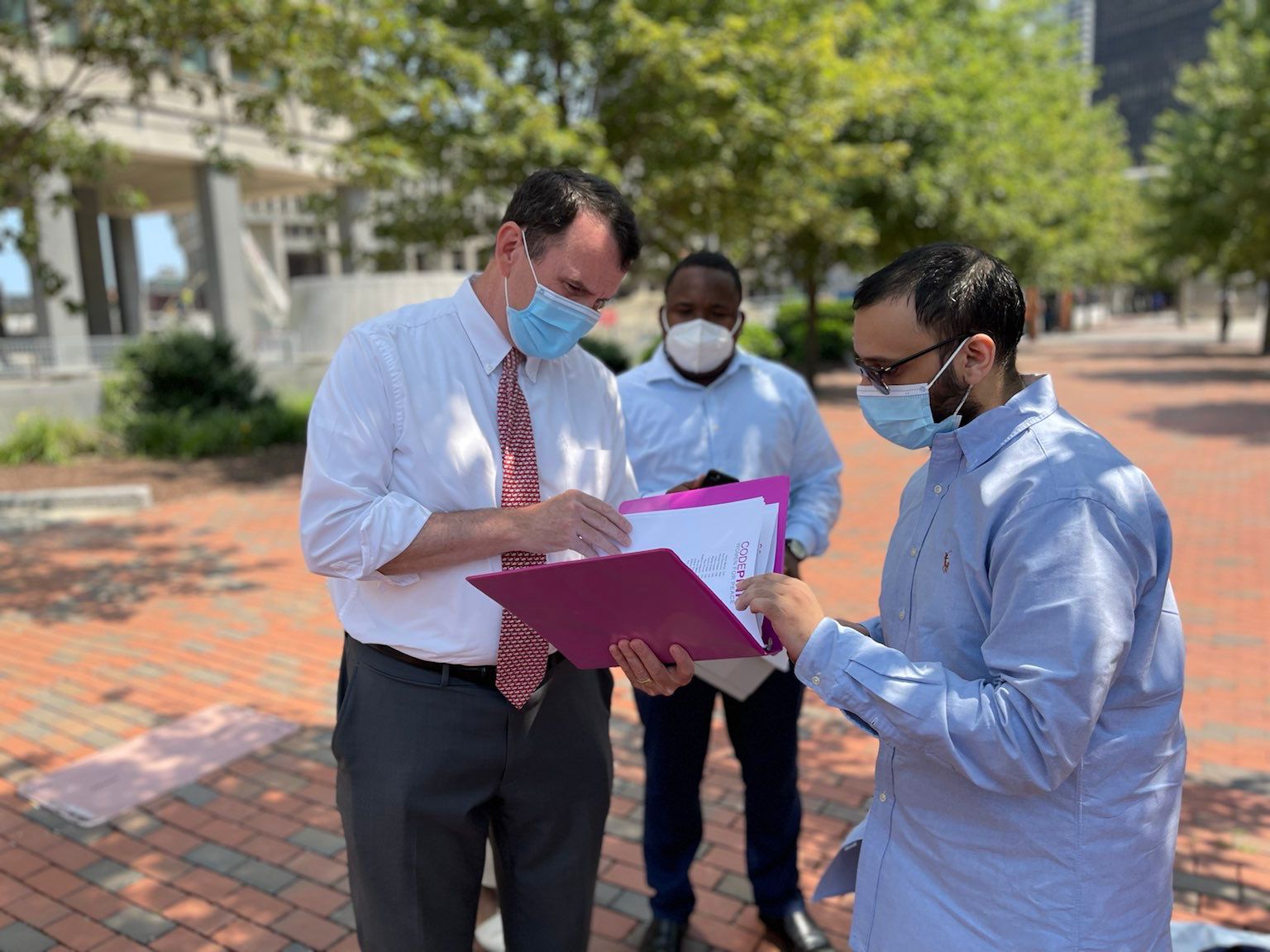 Amar Ahmad, organizer with Mass Peace Action, delivers the China Is Not Our Enemy coalition's signatures to James Cantwell, the State Director for Senator Ed Markey.

Impassioned speeches were given by Joseph Gerson and Calla Walsh, youth activist who supported Markey in his heated primary against Joe Kennedy III last year. The resounding consensus was that those who helped get Markey elected want to see the Senator honor and follow through on his campaign promises to ensure the survival of the planet and the human race.

@CallaWalsh, who supported Markey's campaign, spoke at the rally as well & explained why it is so crucial that Senator Markey stay true to his campaign values in regards to foreign policy. #NoWarOnChina #WarIsNotGreen #JustTransitionNOW https://t.co/vMxnwUcqEP

Calla Walsh spoke about why she chose to campaign for Markey last year. "My generation understood that our lives were on the line in the 2021 election. So much is at stake — from the quality of our education, to the safety of our streets, and the future of our planet," Walsh stated. "Because Senator Markey ran on the Green New Deal," Walsh expressed, "our campaign had clear values of justice, sustainability, and a sense of deep urgency to take action on these issues," and she was there to demand that Senator Markey stay true to these values in regards to foreign policy. Walsh reminded attendees that the American military is the biggest polluter in the world — with higher emission rates than more than 100 countries combined. "Increasing our Pentagon budget is a clear step backwards in the fight to end the climate crisis, and it’s a reversal of Senator Markey’s commitment to cut the Pentagon budget by at least 10%," she explained with clarity. 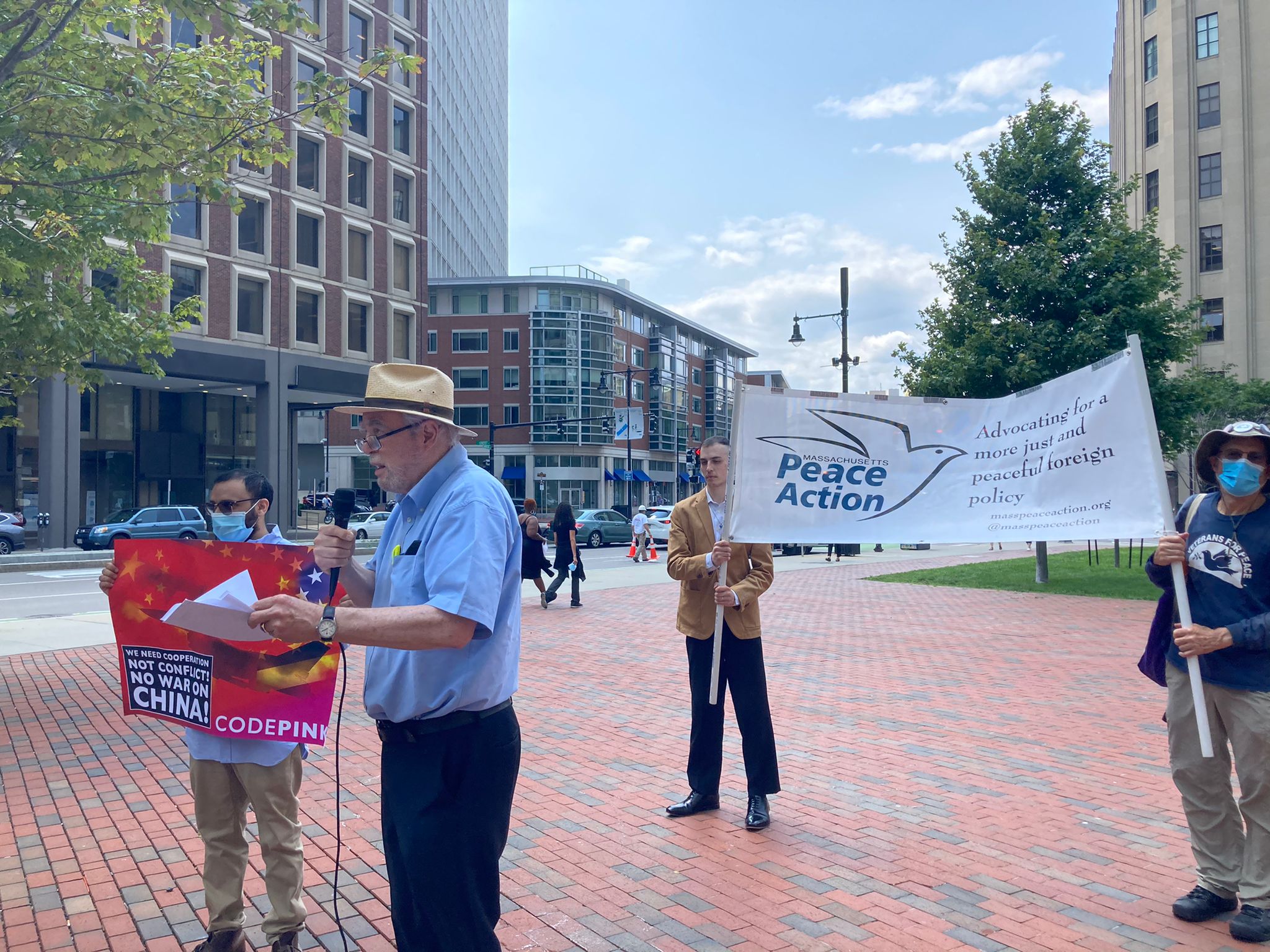 Joseph Gerson speaking at the rally in front of Senator Markey's office.

Joseph Gerson stressed in his speech that, as chairman of the Senate Foreign Relations’ East Asia Committee, Senator Markey has special responsibilities, and that this made his vote for the Strategic Innovations and Competition Act particularly harmful. He also emphasized that while China has about 300 nuclear weapons and may be moving to deploy more, this is a defensive posture in response to the U.S.'s hybrid war and intensified aggression. "The reason for this," Gerson stated, "is that [Chinese leaders] are confronted by about 7,000 U.S. nuclear weapons, and with U.S. deployments of first strike related “missile defenses,” Chinese leaders fear that their deterrent nuclear arsenal is in jeopardy of attack and destruction. Even as we believe that no nuclear weapons should exist," he went on, "we need to recognize that China’s actions in this regard are a predictable response."

Importantly, Gerson brought up that provisions of the US Innovation and Competition Act require every agency to investigate possible Chinese influence in their agency. "This opens the way for witch hunts reminiscent of the McCarthy era and will encourage even more anti-Asian racism," he said, noting that "it brings to mind the internment of absolutely loyal Japanese American Citizens."

Listen to HS student & constituent activist Jack @ the rally at Sen. Markey's office today: "I’m out here today to demand that Markey rise his position [on foreign policy & militarism] up to the same degree of radicalism & proaction as he is on climate change & #BlackLivesMatter" https://t.co/BsoyogP8k3

A successful action mobilized by high school activists and longtime antiwar organizers ultimately resulted in a productive dialogue with Senator Markey's staff, proving why grassroots advocacy is so urgently needed right now. During a Democratic Presidential term that is already causing Americans to be complacent about the power of people to affect change within the U.S. government, U.S. citizens must demand our elected representatives prioritize the public's needs over the omnicidal war economy.

The CODEPINK China Is Not Our Enemy campaign continues to disrupt and challenge this escalation of the U.S.’s hybrid war on China, while educating the public about the possibilities for cooperation on climate change mitigation and nuclear disarmament when it comes to U.S.-China relations. Follow us and view the related media and actions below for more!