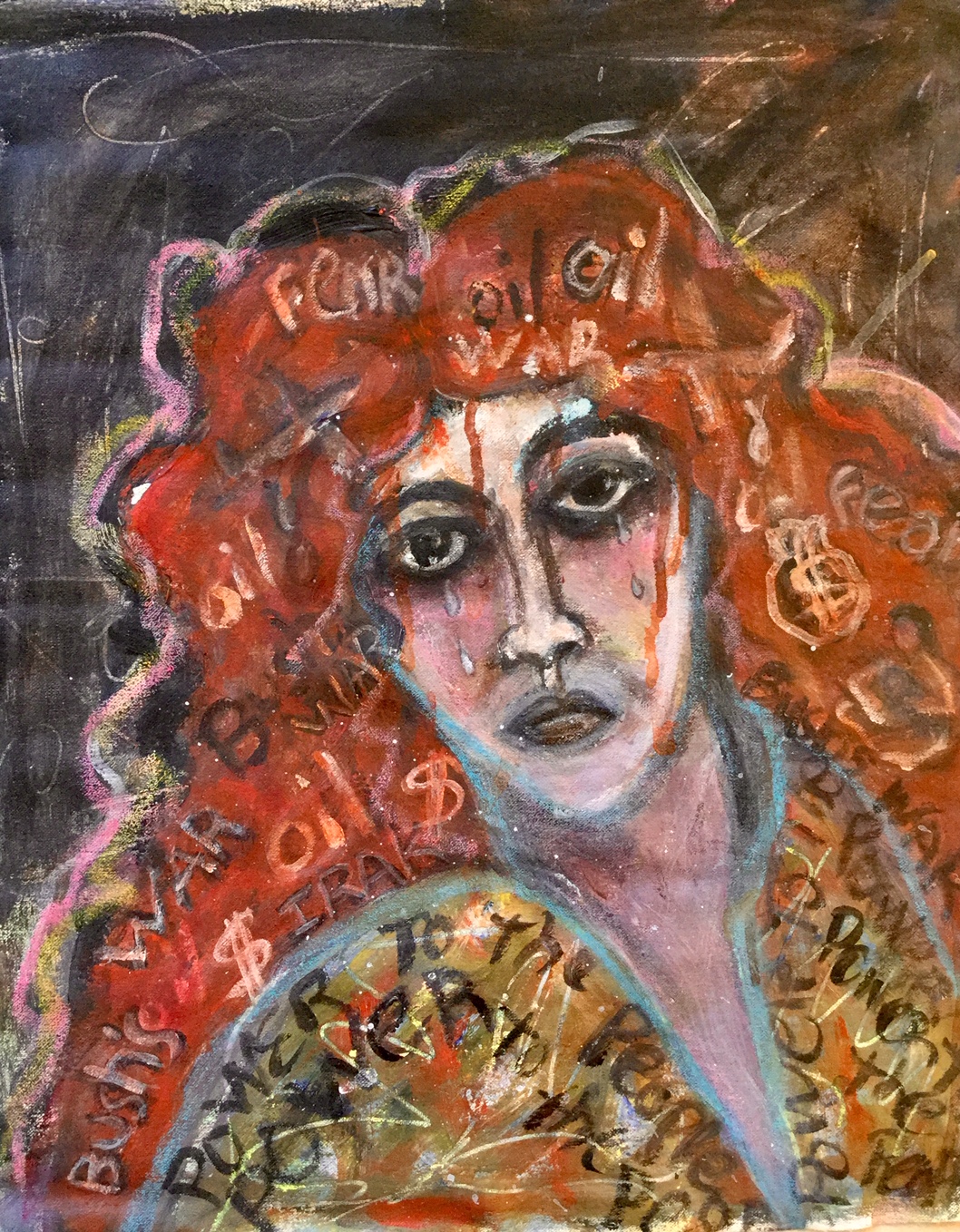 Amid the ongoing horror, it’s important to find ways to atone for war crimes —including reparations.

Thirty years ago, when the United States launched Operation Desert Storm against Iraq, I was a member of the Gulf Peace Team. We were 73 people from fifteen different countries, aged 22 to 76, living in a tent camp close to Iraq’s border with Saudi Arabia, along the road to Mecca.

We aimed to nonviolently interpose ourselves between the warring parties. Soldiers are called upon to risk their lives for a cause they may not know much about. Why not ask peace activists to take risks on behalf of preventing and opposing wars?

So we witnessed the dismal onset of the air war at 3:00 a.m. on January 17, 1991, huddled under blankets, hearing distant explosions and watching anxiously as war planes flew overhead. With so many fighter jets crossing the skies, we wondered if there would be anything left of Baghdad.

Ten days later, Iraqi authorities told us we must pack up, readying for a morning departure to Baghdad. Not all of us could agree on how to respond. Adhering to basic principles, twelve peace team members resolved to sit in a circle, holding signs saying “We choose to stay.”

Buses arrived the next morning, along with two Iraqi civilians and two soldiers. Tarak, a civilian, was in charge, under orders to follow a timetable for the evacuation. Looking at the circle of twelve, Tarak seemed a bit baffled. He walked over to where I stood. “Excuse me, Ms. Kathy,” he asked, “but what am I to do?”

“No one in that circle means you any harm,” I assured him. “And no one wishes to disrespect you, but they won’t be able board the bus on their own. It’s a matter of conscience.”

Tarak nodded and then motioned to the other Iraqis who followed him as he approached Jeremy Hartigan, the tallest person sitting in the circle. Jeremy, an elderly UK lawyer and also a Buddhist, was chanting a prayer as he sat with his sign.

Tarak bent over Jeremy, kissed him on the forehead, and said, ”Baghdad!” Then he pointed to the bus.

Next, he, the other civilian and two Iraqi soldiers carefully hoisted  Jeremy, still in his cross-legged position, and carried him to the top step of the bus. Gently placing him down, Tarak then asked,  “Mister, you okay?!” And in this manner they proceeded to evacuate the remaining eleven people in the circle.

Another evacuation was happening as Iraqi forces, many of them young conscripts, hungry, disheveled and unarmed, poured out of Kuwait along a major highway, later called “the Highway of Death.”

Boxed in by U.S. forces, many Iraqis abandoned their vehicles and ran away from what had become a huge and very dangerous traffic jam. Iraqis attempting to surrender were stuck in a long line of Iraqi military vehicles. They were systematically slaughtered.

“It was like shooting fish in a barrel,” said one U.S. pilot of the air attack. Another called it “a turkey shoot.”

Days earlier, on February 24th, the United States Army forces buried scores of living Iraqi soldiers in trenches. According to The New York Times, Army officials said “the Iraqi soldiers who died remained in their trenches as plow-equipped tanks dumped tons of earth and sand onto them, filling the trenches to ensure that they could not be used as cover from which to fire on allied units that were poised to pour through the gaps.”

Shortly after viewing photos of gruesome carnage caused by the ground and air attacks, President George H.W. Bush called for a cessation of hostilities on February 27th, 1991. An official cease fire was signed on March 4.

It’s ironic that in October of 1990, Bush had asserted that the U.S. would never stand by and let a larger country swallow a smaller country. His country had just invaded Grenada and Panama, and as President Bush spoke, the U.S. military pre-positioned at three Saudi ports hundreds of ships, thousands of aircraft, and millions of tons of equipment and fuel in preparation to invade Iraq.

Noam Chomsky notes that there were diplomatic alternatives to the bloodletting and destruction visited upon Iraq by Operation Desert Storm. Iraqi diplomats had submitted an alternative plan which was suppressed in the mainstream media and flatly rejected by the U.S.

The U.S. State Department, along with Margaret Thatcher’s government in the United Kingdom, were hell-bent on moving ahead with their war plans. “This was no time to go wobbly,” U.K. Prime Minister Margaret Thatcher famously warned Bush.

The resolve to attack and punish Iraqis never ceased.

After the “success” of Operation Desert Storm, the bombing war turned into an economic war, which lasted through 2003. As early as 1995, United Nations documents clarified that the economic war, waged through continued imposition of U.N. economic sanctions against Iraq, was far more brutal than even the worst of the 1991 aerial and ground war attacks.

In 1995, two Food and Agriculture Organization scientists estimated that more than half a million Iraqi children under age five had likely died due to economic sanctions.

In February, 1998, while visiting a hospital in Baghdad, I watched two friends from the United Kingdom trying to absorb the horror of seeing children being starved to death because of policy decisions made by governments in the UK and the U.S. Martin Thomas, himself a nurse, looked at mothers sitting cross legged, holding their limp and dying infants, in a ward where helpless doctors and nurses tried to treat many dozens of children.

“I think I understand,” said Thomas. “It’s a death row for infants.” Milan Rai, now editor of Peace News and then the coordinator of a U.K. campaign to defy the economic sanctions, knelt next to one of the mothers. Rai’s own child was close in age to the toddler the mother cradled. “I’m sorry,” Rai murmured. “I’m so very sorry.”

Those six words whispered by Milan Rai, are, I believe, incalculably important.

If only people in the U.S. and the UK could take those words to heart, undertaking to finally pressure their governments to echo these words and themselves say, “We’re sorry. We’re so very sorry.”

We’re sorry for coldly viewing your land as a “target rich environment” and then systematically destroying your electrical facilities, sewage and sanitation plants, roads, bridges, infrastructure, health care, education, and livelihood. We’re sorry for believing we somehow had a right to the oil in your land, and we’re sorry many of us lived so well because we were consuming your precious and irreplaceable resources at cut rate prices.

We’re sorry for slaughtering hundreds of thousands of your children through economic sanctions and then expecting you to thank us for liberating you. We’re sorry for wrongfully accusing you of harboring weapons of mass destruction while we looked the other way as Israel acquired thermonuclear weapons.

We’re sorry for again traumatizing your children through the 2003 Shock and Awe bombing, filling your broken down hospitals with maimed and bereaved survivors of the vicious bombing and then causing enormous wreckage through our inept and criminal occupation of your land.

We’re sorry. We’re so very sorry. And we want to pay reparations.

From March 5 – 8, Pope Francis will visit Iraq. Security concerns are high, and I won’t begin to second guess the itinerary that has been developed. But knowing of his eloquent and authentic plea to end wars and stop the pernicious weapons trade, I wish he could kneel and kiss the ground at the Ameriyah shelter in Baghdad.

There, on February 13, 1991, two 2,000 lb. U.S. laser guided missiles killed 400 civilians, mostly women and children. Another 200 were severely wounded. I wish President Joe Biden could meet the Pope there and ask him to hear his confession.

I wish people around the world could be represented by the Pope as a symbol of unity expressing collective sorrow for making war after hideous war, in Iraq, against people who meant us no harm.

A version of this article first appeared at The Progressive.org  https://progressive.org/dispatches/remembering-first-gulf-war-kelly-210302/

Kathy Kelly, ([email protected]) is a peace activist whose effort have at times led her into war zones and U.S. prisons.