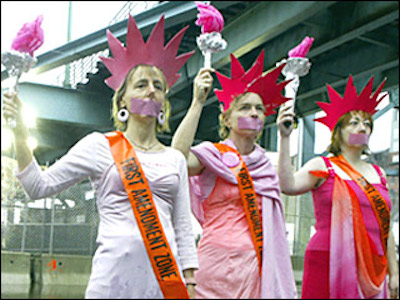 In a recent piece on The Intercept, Glenn Greenwald and Andrew Fishman make the case that, “One of the greatest threats to free speech in the west is the growing, multi-nation campaign literally to outlaw advocacy of boycotting Israel.” Whatever one might think of the Boycott, Divestment, and Sanctions Movement on behalf of Palestinian rights, ominous threats against our right to boycott should alarm anyone who cares about free speech and about boycott as a time-honored form of non-violent political advocacy.

Just this past Sunday, New York Governor Andrew Cuomo signed an Executive Order that will create a blacklist of groups and businesses that advocate for a boycott of Israel. The New York State legislature had failed to pass an anti-boycott measure in part because of questions of its constitutionality, but similar bills have been introduced in more than a dozen states and have passed in nine. In response to Governor Cuomo’s Executive Order, Senator Chuck Schumer announced that he was planning to introduce a similar measure at the federal level.

Send Andrew Cuomo a message saying that you won’t stand for this kind of unconstitutional, McCarthyite bullying.

Columbia law professor Katherine Franke and the late Michael Ratner of The Center for Constitutional in a recent op-ed give an excellent brief overview of the history of boycott, starting with its use in England in the late 18th century by opponents of the slave trade. They explain why we all should be concerned about current attempts to curtail our use of a respected and proven non-violent tactic. Please take a moment to send a message in defense of our right to boycott, and our right to free speech and assembly.

There is a growing split over Israel in the Democratic Party, and we hope that many of you can join us at the upcoming Democratic National Convention, to challenge these McCarthyite attacks by mainstream Democratic officials on our right to free speech and our right to boycott. When we started our boycott campaign against settlement profiteer Ahava Dead Sea Laboratories in 2009, Israeli officials dismissed the efforts of the BDS Movement as inconsequential. Seven years later we can see that our principled work is so effective that the Governor of New York has signed this anti-democratic and unconstitutional Executive Order. Governor Cuomo may think he can employ this bullying tactic to stop people and groups from using boycott and divestment to end Israel's occupation and its apartheid policies, but he has misread the law and underestimated our commitment to justice and equality.