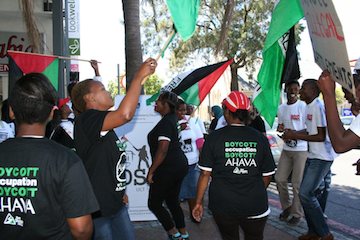 “Yesterday I dared to struggle. Today I dare to win.”

CODEPINK is thrilled to share with you the wonderful news that after seven years of hard work on the Stolen Beauty Ahava boycott campaign, Ahava Dead Sea Laboratories announced on Thursday that they plan to move their factory from the occupied West Bank to within Israel’s internationally recognized pre-1967 borders. This win would not have been possible without the sustained work of dedicated human rights activists around the world.

In a second BDS win, also on Thursday, global security giant G4S announced that in order to extract themselves from “reputationally damaging work,” they will be selling their entire Israeli subsidiary in the next 12-24 months. 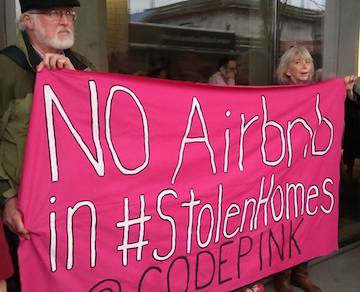 Both the Ahava and G4S wins were achieved through  coordinated work by  human rights groups across the globe. Now CODEPINK, Jewish Voice for Peace, and others are leading the Stolen Homes campaign to ask worldwide accommodations leader Airbnb to cease listing homes in illegal Israeli settlements. The Stolen Homes campaign was launched in January 2016 with a petition and a CODEPINK-led protest outside of Airbnb headquarters in San Francisco. Last week, activists returned to Airbnb offices in San Francisco, Portland, Paris, and London to deliver over 140,000 signatures pressing Airbnb to stop profiting from and contributing to Israel’s violations of international law. The Stolen Homes campaign has also created a parody website where you can leave a comment to protest Airbnb's practices.

As we celebrate major BDS wins this week, we also know that our work is far from over. The situation on the ground remains increasingly grim for Palestinians, and our opposition is mobilizing tens of millions of dollars to fight us using lawfare, lobbying, cyberwarfare and more. While we are thrilled by the announcements by Ahava Dead Sea Laboratories and G4S, we must continue to apply pressure until these companies follow through on their promises.

From March 20-22, the American-Israel Public Affairs Committee (AIPAC) will hold their annual convention in Washington DC and presidential candidate. CODEPINK will be there protesting AIPAC’s islamophobia, undermining of democracy, and demand for US support of a foreign military. Sadly, presidential candidates Hillary Clinton and Donald Trump have accepted invitations to speak.  We have launched a petition asking Senator Bernie Sanders, not to attend. Sign the petition here.

Towards peace, justice, and equality

P.S. CODEPINK is invites you to attend the play There is a Field about 17-year old Palestinian citizen of Israel, Aseel Asleh, killed by Israeli police in 2000. There is a Field is being performed now through April 9 in MD, PA, Washington DC, NJ, CT, NY, FL, GA, MO. See description, dates, and locations here.