As you sit down to Thanksgiving dinner 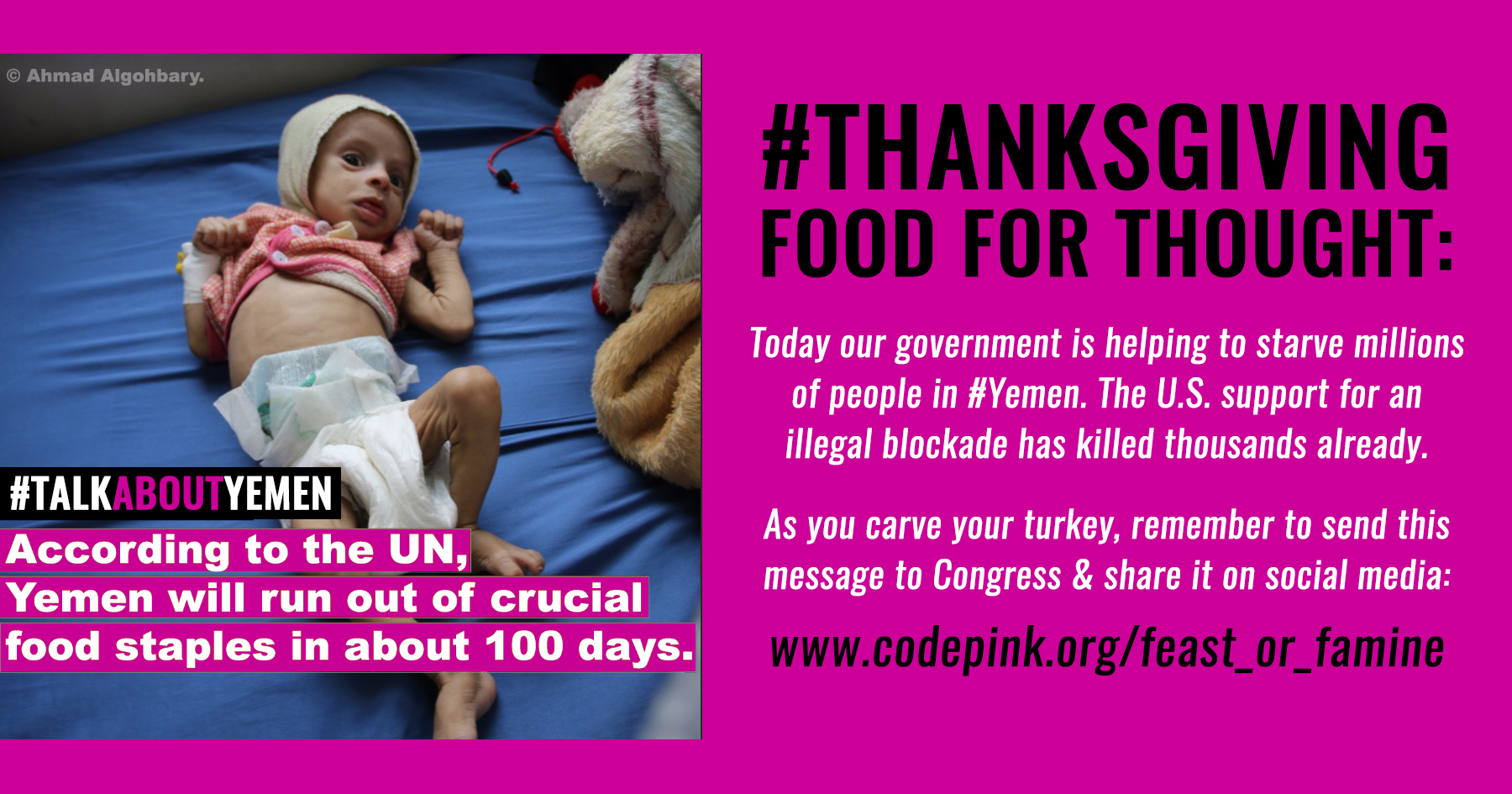 Tomorrow, families across the US will be gathering around the dinner table. At the same time, the people of Yemen will be suffering under a famine so severe that every 10 minutes a child is dying from malnutrition. The shocking contrast between feast and famine is bad enough. Even worse is the knowledge that the US is supporting the Saudi bombing and blockade that is causing this catastrophe.

But Congress has the ability to put a stop to this. Send a message telling your representatives they must demand an end to US complicity in the Saudi bombing and blockade of Yemen.

The Yemeni people are suffering from the largest cholera epidemic in modern history. Almost a million people are sick and the blockade is preventing medicines from getting in. Fuel has run out in many parts of the country. Hospitals are without power and water purification systems are unable to work. For many people, the only water available is contaminated by sewage.

Watch this heartbreaking new piece by 60 Minutes. While the Saudi government refused to let the 60 Minutes crew into Yemen, they got devastating footage from aid workers inside the country. Unfortunately, the 60 Minutes piece failed to mention the shameful support of the US military.

The US has been giving Saudi Arabia a blank check to carry out its assault, providing the Saudis with weapons and logistical support for the bombing campaign. Already, thousands of Yemeni civilians have lost their lives—and we bear much of the responsibility. As Senator Chris Murphy said, “There’s an American imprint on every civilian life lost in Yemen.”

The only way to stop the humanitarian crisis is to stop the war. Tell Congress this Thanksgiving that as soon as they return to Capitol Hill, they must act.

As we gather tomorrow with family and friends, we also have the opportunity to talk in person and on social media about the crisis in Yemen. Add to the conversation by using the hashtag #TalkAboutYemen. Let’s show the Yemeni people that we hold them in our hearts.

P.S. This week we remember our powerful time in Standing Rock last year (a thanks from Winona LaDuke for your generosity last year!). We refuse to forget the violence and genocide of indigenous people in the past and present. On this time of gratitude we offer some ideas on how to decolonize our minds and hearts, and to challenge current ideologies, re-imagine ways to relate with people and the earth, and take action.