Are YOU supporting war or peace? 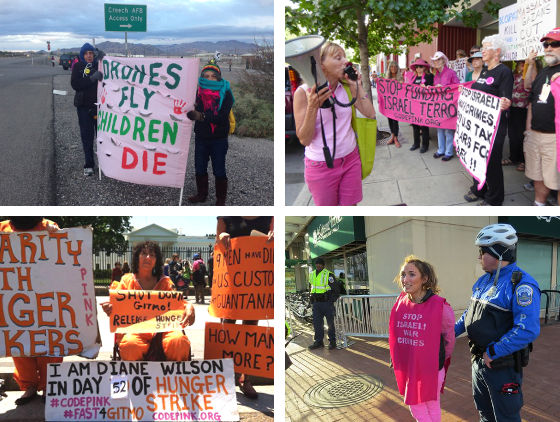 As a supporter of CODEPINK, you have probably taken many actions against war and for peace and justice over the years: marching, vigiling, lobbying, organizing public events, traveling, dropping banners. Maybe you have protested at military recruiting offices or at an air/drone base. Maybe you have fasted in solidarity with torture victims at Guantanamo. Maybe your passion for peace has led you to get arrested.

We at CODEPINK, from the bottom of our hearts, thank all who give time, talents, money and energy to “end U.S. wars and militarism, and support peace and human rights initiatives.” Our world would be bleaker and bloodier without your – our – activism.

But the bitter fact remains: all of us who pay taxes support U.S. wars and militarism – unwillingly, angrily, sorrowfully. On Tax Day we confront the truth that well over 50% of the U.S. federal budget goes to the Pentagon. A projected over $600 billion for FY 2017 will pay for military bases all over the world. For military weapons and surveillance systems. For the longest-ever U.S. war, still dragging on in Afghanistan. For thousands of U.S. troops and contractors AGAIN in Iraq. For the detention/torture facility at Gitmo. For “aid” to foreign militaries, used by tyrannical regimes to repress their dissenters and religious minorities.

Our taxes are gifts to the military-industrial complex. Meanwhile, real human needs at home and abroad go under- or unfunded.

A few of us DO refuse to pay war taxes, like teacher/blogger Lisa Savage of Maine, who writes of her transition from “nice, middle class girl to war tax resister” here.

We all can't be tax resisters, but we all can do something for peace. On this Tax Day, we ask you to do the following things, knowing that the journey from a war economy to a peace economy is a long one.

Do something for peace and justice today - and every day,