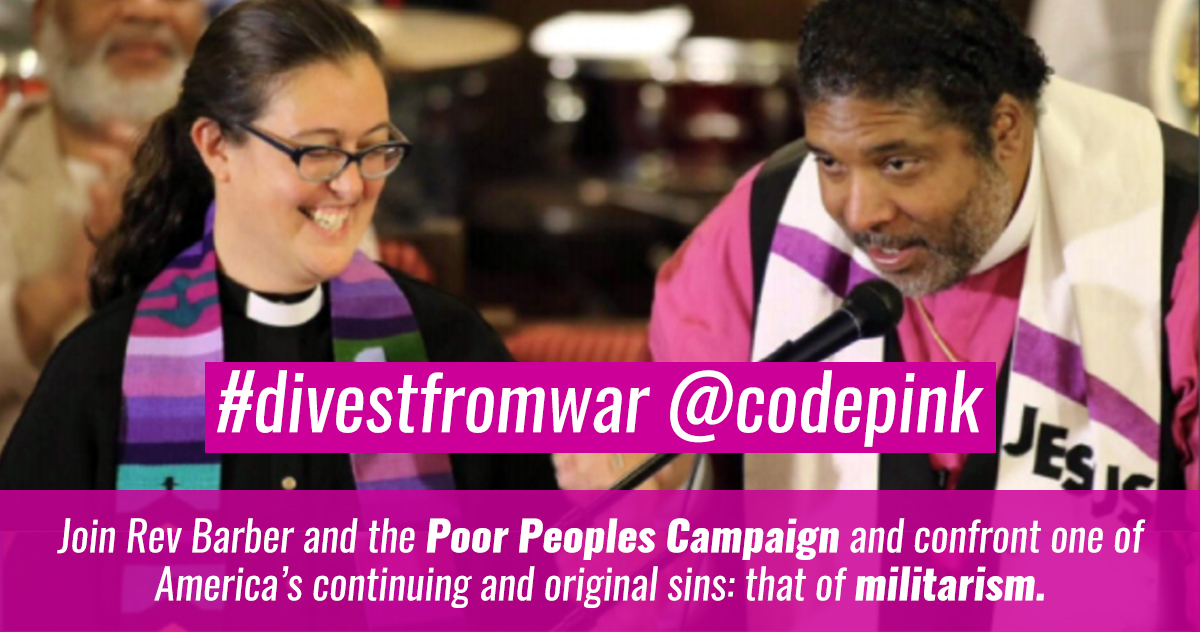 There is no way in American culture that we can address the systemic realities of poverty, racism and ecological devastation without understanding and confronting one of America’s continuing and original sins, that of militarism.

Today, we spend a larger portion of our nation’s budget on war than we spent during the Vietnam War. Budgets are driven by the madness of war mongering and tax cuts for the wealthy profiteers of war who get rich while the bodies of young, poor citizens of all races, creeds, colors and sexualities are destroyed and maimed, and their mental capacities forever broken.

Tune in tonight at 7pm EST for a livestream from the historic New York Avenue Presbyterian Church, where Abraham Lincoln wrote parts of the Emancipation Proclamation and Martin Luther King delivered a sermon challenging the Vietnam War. I’ll be addressing the costs of the war economy and the moral and real injury of militarism, and I want to invite you to join the launch the Poor People’s Campaign: A National Call for A Moral Revival with a focus on children, women and the disabled poor.  Join us in nonviolent engagement starting on May 14th in Washington DC or these 40 states.

We cannot be silent anymore. Dr King told us:  “A nation that continues year after year to spend more money on military defense than on programs of social uplift is approaching spiritual death.” In order to continually promote militarism, a nation must be engaged in massive lies and deceptions. Even General Eisenhower, in his final speech from the White House in 1961, said; "In the councils of government, we must guard against the acquisition of unwarranted influence, whether sought or unsought, by the Congressional military-industrial complex. The potential for the disastrous rise of misplaced power exists, and will persist."

We have loosed unmanned drones that kill women and children. Our president recently launched missiles against Syria, and his spokesperson lied and said it was in accordance with the Constitution.

No movement concerned with the heart and soul of America, and literally the existence of the world, can ignore or refuse to confront, nonviolently, the nation’s war economy and militarism.

I invite you to join us tonight at 7pm EST to hear more about the costs of the war economy and the moral and real injury of militarism.

Please join us as we launch the Poor People’s Campaign: A National Call for A Moral Revival, beginning May 14th with a focus on children, women and the disabled poor. Join us for nonviolent engagement in Washington DC or these 40 states.