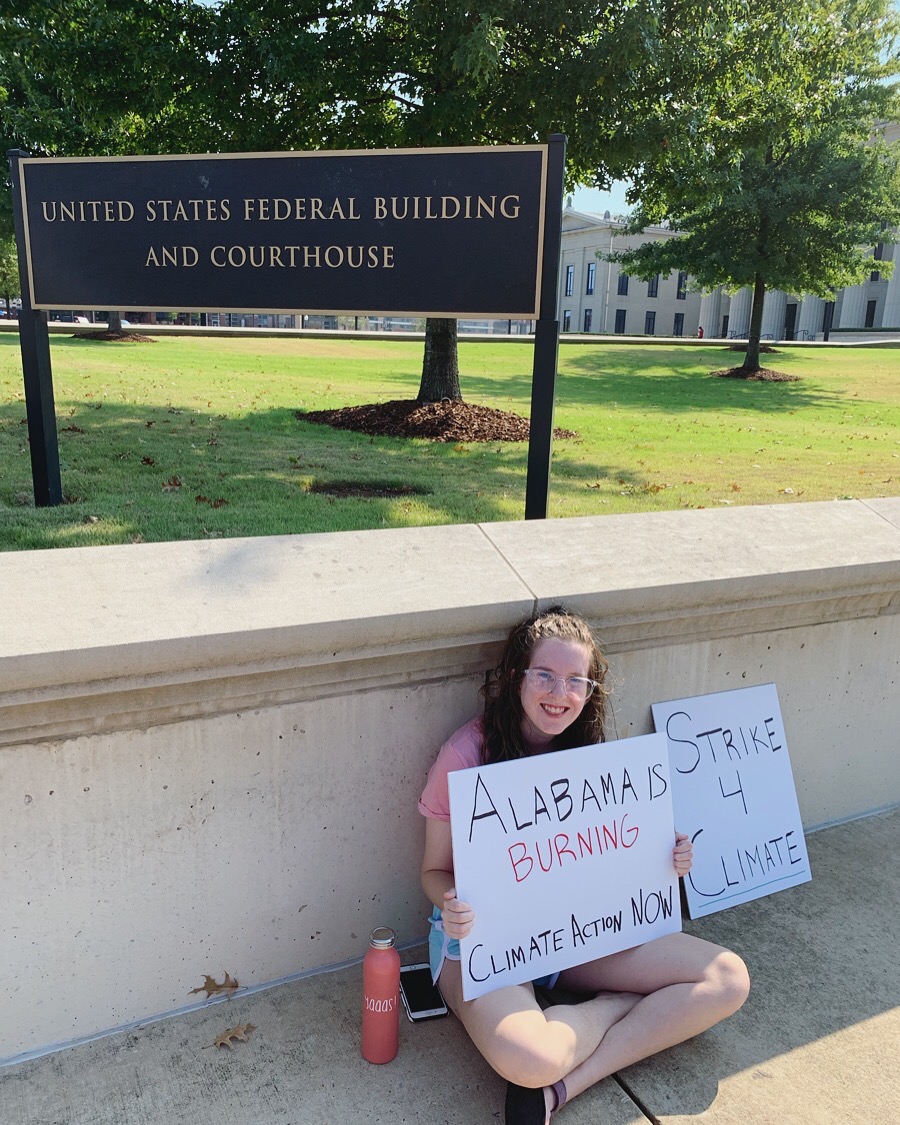 However, Every Friday, I will be sitting beside the Tuscaloosa Federal Building to make Alabama politicians and citizens think about climate change, the greatest threat to my generation. Greta Thunberg, founder of the Fridays For Future movement in which I will partake, said she wants lawmakers to panic like their house is on fire. When it comes to Alabama’s representatives, I just want them to wake up because the South is on fire. We are another tornado season, 95 degrees in October, rising Gulf Coast, and coal-plant-in-a low-income-community away from destroying our state.

This goes far beyond how hot it is outside where I live. It’s about the smog of lies that will ultimately kill my generation, along with climate disaster. My lawmakers are telling young people that climate change isn’t real, and the ones who have quite literally faced the facts still accept money from the fossil fuel industry and vote against renewable energy at every turn. The youth in this state have had enough BS and we know it is past time to act.

Since the BP oil spill in 2010 that devastated Alabama’s Gulf Coast, economy, and population, Senator Richard Shelby has taken $8,000 dollars from that company alone. He has taken its money in every election since the spill. In total, Alabama politicians currently serving in the Senate and Congress have taken at least $26,500 from BP since they drop-kicked our state, and that is just from one corporation in one sector of the fossil fuel industry. I added up how much money Alabama politicians have taken from oil, gas, and fossil fuel corporations in total and it is in the millions.

So, when they tell us that they don’t believe in climate change, that it’s not “grounded in science,” that it has always been this way, and that nothing can change, what they really mean to say is that they like money more than they like our state or our planet. In 2015, Senator Shelby said climate change was not based in science and that any action toward renewable energy could harm our economy. Green manufacturing is currently one of the biggest potential job markets in the world and climate change has been reported as a fact, but I guess Senator Shelby just forgot that. $1,112,262 from fossil fuel, oil, and gas companies is a very convenient excuse to forget a crisis.

Senator Doug Jones said that the Green New Deal was unrealistic and reached too far. The reason I am striking is to try and push him, along with every other Alabama representative, to reach further. Senator Jones, if you don’t like the Green New Deal, put forth a climate resolution that you are satisfied with and that meets the urgency of where we are. Include a Just Transition for the thousands of workers and frontline community members who live in Alabama and put it to a vote. Regardless of how anyone feels about the Green New Deal, it is the only option that my generation has been given for a livable future.

I want to make it clear that I am not against any of my representatives, personally. I am against the corruption in which they have taken part and their general lack of action toward issues that directly impact young people. They are killing us. That is why I am inviting every politician in Alabama (even those who don’t live near Tuscaloosa) to join one of my weekly strikes. If they want to come and have a discussion about how to fix that lack of action and truly represent the young people of this state then I would be more than happy to welcome them.

They can also come and adultsplain to me how I am wrong and that I don’t know what I’m talking about; however, I am way more scared of a mass extinction by the time I am 28 then I am of any politician. 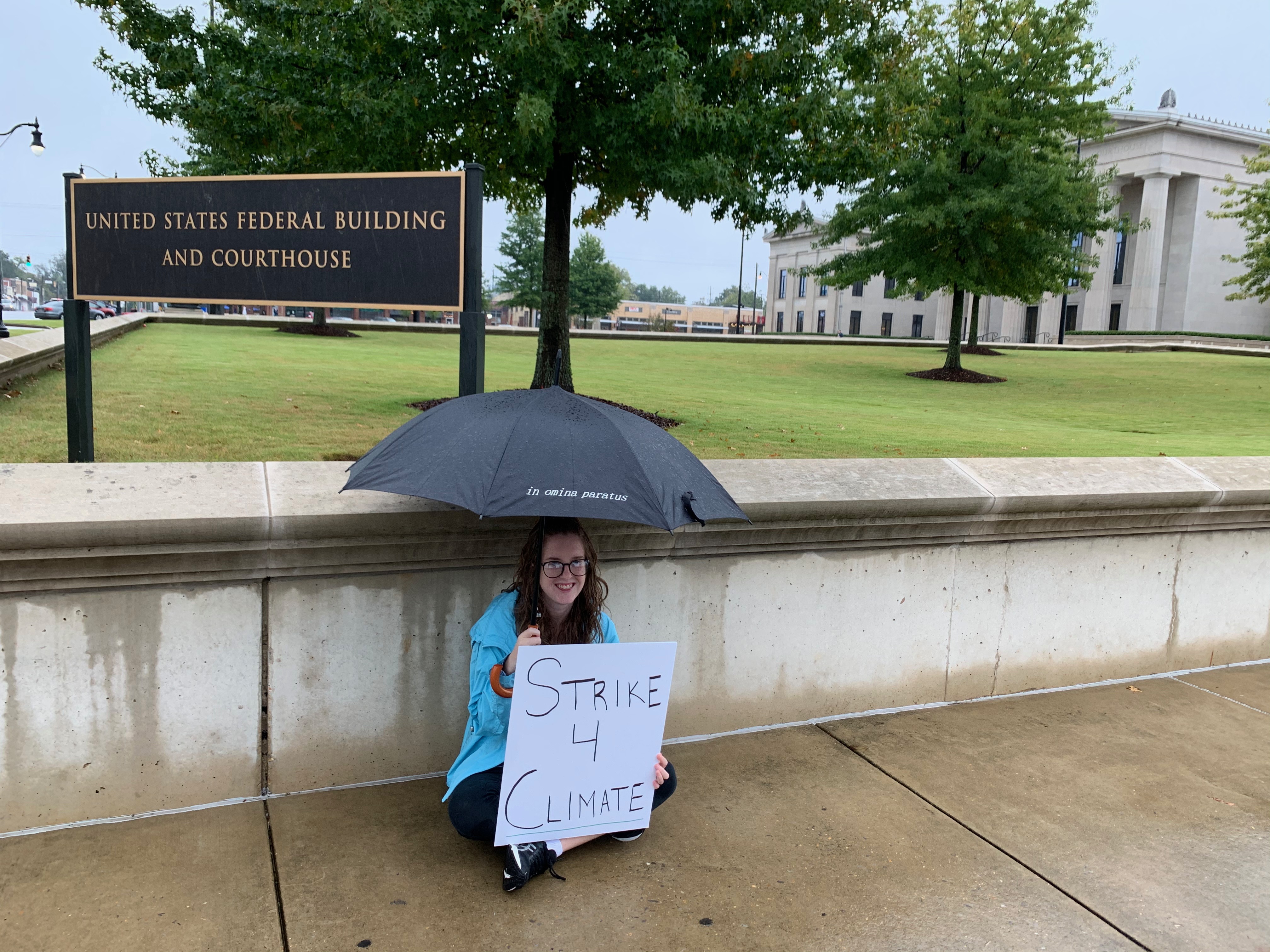 I am a homeschooled high school senior and a student with University of Alabama’s Early College. I have schoolwork to do every day regarding college prep and testing. I have been accepted into The University of Alabama, but I am currently working on my Common App to apply elsewhere as well. I have chores, work, and a daily routine. Every Friday, I will be striking from that daily routine to protest my state’s inaction on climate change. In other words, I will be doing what kids these days do: striking for my future.