We celebrate Jane Fonda’s inspiring Fire Drill Fridays and invite you to join her in raising awareness about the urgent need for climate justice.

Spread the word on social media!

→ Sign up to join CODEPINK at the Capitol Building on Fridays.

Inspired by urgent action needed to address climate change, Jane Fonda is upending her life and spending 4 months in Washington D.C. this fall. Every Friday she's there will be "Fire Drill Friday" to bring urgent attention to important intersectional analysis around Climate Change.

Funding endless war is an existential threat to human life and one of the leading causes of climate change, which is why it’s urgent that we come together in Washington D.C. and make the connection between U.S. militarism and climate change. November 8th was focused directly on this issue but we continue to support these events as the war economy is the driving force that fuels Climate Change.

On Jane's birthday, December 20th, we will be there to celebrate her life, and her giving it to peace and the planet.

→ Sign up to join CODEPINK at a Fire Drill Friday! 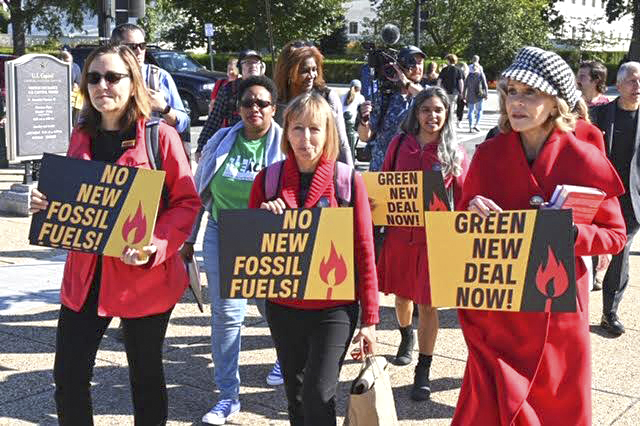 Thank you for being part of CODEPINK engaging in Jane Fonda’s Fire Drill Fridays! Below is the weekly schedule and logistical information.

The rally will take place on the southeast lawn of the Capitol Building, across from the Library of Congress and near the intersection of 1st St & Independence Ave SE

The rally will go from 11am–12pm, followed most weeks by a civil disobedience action.

We expect that anyone arrested will be released within a few hours and have the option to pay a small fine, usually $50, rather than have to come back for a court date.

What not to bring: