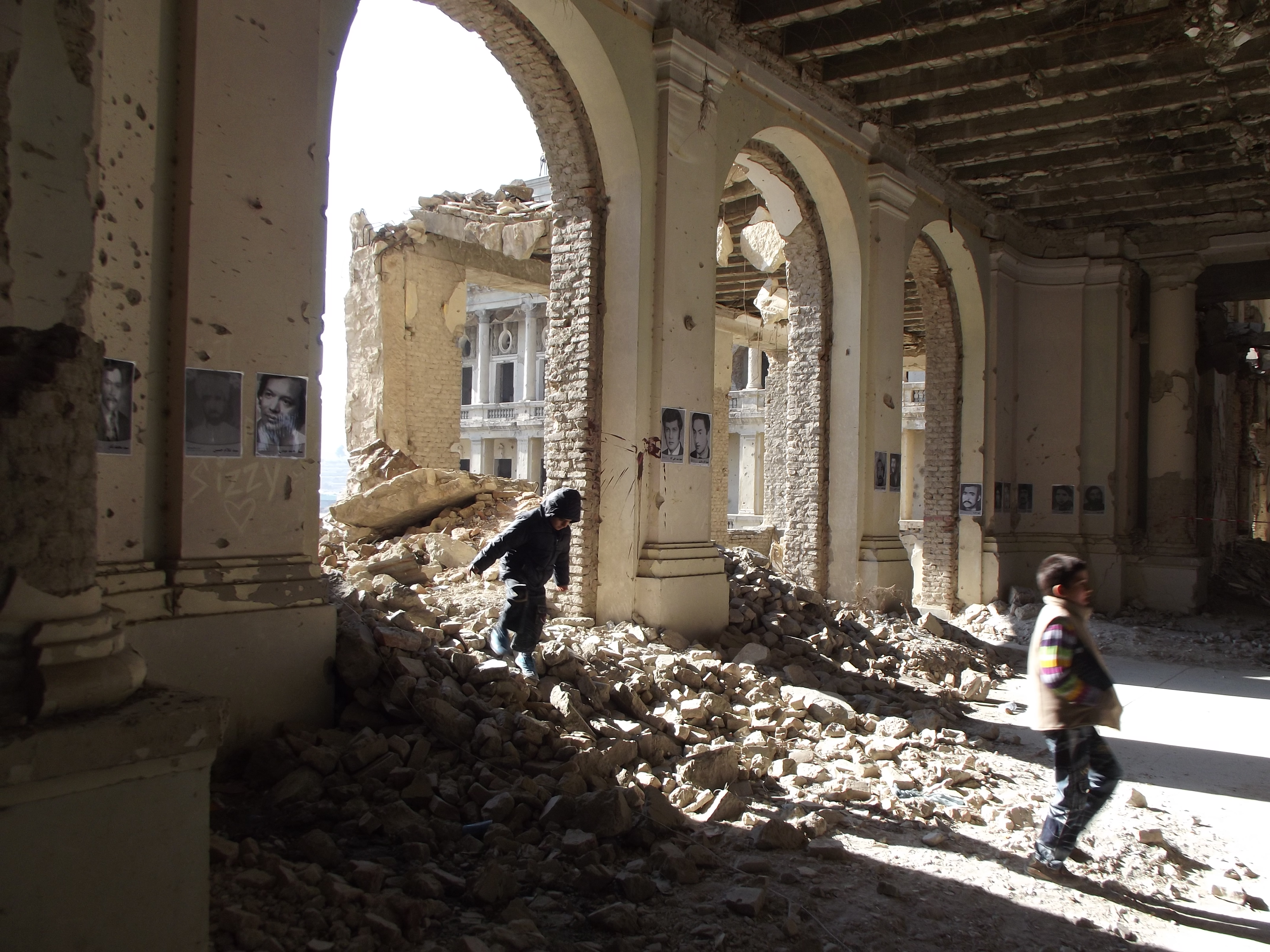 Afghan children play in the bombed-out rubble of the Darul Aman Palace in Kabul, amidst a photo exhibition marking four decades of Afghans killed in war and oppression.

The NATO & US-backed war on Afghanistan was launched 7th October 2001, just a month after 9/11, in what most thought would be a lightning war and a stepping stone onto the real focus, the Middle East. 19 years later and the US is still trying to extricate itself out of the longest war in its history, having failed in 2 of its three original aims: toppling the Taliban and liberating Afghan women. Perhaps the only target confidently met was the assassination of Osama Bin Laden in 2012, who was, in fact, hiding out in Pakistan. The overall cost of the war has been over 100,000 Afghan lives, and 3,502 NATO and US military fatalities. It has been calculated that the US has so far spent $822 billion on the war. While no up to date calculation exists for the UK, in 2013 it was thought to have been £37 billion.

Peace talks between the Taliban, Mujaheddin, Afghan Government and US have been slowly unfolding over the last 2 years. Mainly taking place in the city of Doha, Qatar, the talks consisted predominantly of older male leaders who have been trying to kill one another for the last 30 years. The Taliban almost certainly have the upper hand, as after 19 years of fighting 40 of the richest nations on the planet, they now control at least two-thirds of the country’s population, claim to have an endless supply of suicide bombers, and have most recently managed to secure a controversial deal with the US for the release of 5,000 Taliban prisoners. All along the Taliban have been confident of the long game despite the US initial 2001 promise to defeat the Taliban.

Most ordinary Afghans hold out little hope for the peace talks, accusing the negotiators of being disingenuous. Kabul resident 21-year-old Naima says: “The negotiations are just a show. Afghans know those people have been involved in war for decades, that that they are now just making deals to give Afghanistan away. What the US says officially and what is done is different. If they want to wage war then they will, they are in control and they are not in the business of bringing peace.”

20-year-old Imsha, also living in Kabul, noted: “I don’t think the negotiations are for peace. We’ve had them in the past and they don’t lead to peace. One sign is that when negotiations are going on people are still being killed. If they’re serious about peace, then they should stop the killing.”

Civil society groups and young people have not been invited to the various rounds of talks in Doha, and on only one occasion was a delegation of women invited to put their case for maintaining the hard-earned rights gained over the last 19 years. Although women’s liberation was one of the three main justifications given by the US and NATO when invading Afghanistan in 2001, it is not one of the key negotiation issues for the peace agreement, instead the main concerns are around the Taliban never again hosting al Qaeda, a ceasefire, and an agreement between the Taliban and Afghan Government to share power. There is also the question as to whether the Taliban present at the peace talks in Doha represent all the various fractions of the Taliban both across Afghanistan and in Pakistan – many Afghans note they do not have the remit of all divisions, and on that basis, talks are automatically illegitimate.

So far, the Taliban have agreed to talk with the Afghan Government, a somewhat promising indication as previously the Taliban have refused to accept the legitimacy of the Afghan Government which, in their eyes, was the illegitimate puppet Government of the US. Also, a ceasefire is one of the prerequisites of the peace deal, sadly there has been no such ceasefire during the talks with attacks on civilians and civil buildings being an almost everyday occurrence.

President Trump has made it clear that he wants to remove US troops from Afghanistan, though it is likely the US will want to maintain a foothold in the country by way of US military bases, and the mining rights being opened up to US corporations, as discussed by President Trump and Ghani in September 2017; at that point, Trump described US contracts as payment for propping up the Ghani Government. Afghanistan resources make it potentially one of the richest mining regions in the world. A joint study by The Pentagon and the United States Geological Survey in 2011 estimated $1 trillion of untapped minerals including gold, copper, uranium, cobalt and zinc. It is probably no coincidence that the US special peace envoy at the talks is Zalmay Khalilzad, former consultant for the RAND corporation, where he advised on the proposed trans-Afghanistan gas pipeline.

Although Trump wants to reduce the remaining 12,000 US troops down to 4,000 by the end of the year, it is unlikely the US will withdraw from their remaining 5 military bases still ensconced in the country; the advantage of having a foothold in a country which boarders its main rival China will be near impossible to relinquish. The main bargaining piece for the US is the threat to withdraw aid, as well as the potential to drop bombs – Trump has already shown willingness to go in hard and fast, dropping ‘the mother of all bombs’ on Nangahar in 2017, the biggest non-nuclear bomb ever dropped on a nation. For Trump, a single large bomb or intense carpet aerial bombing will be his probable course of action if talks fail to go his way, a tactic that would also shore up his presidential campaign which is being fought on the lines of a ‘cultural war’, whipping up racism mixed with white nationalism.

Despite the UN call for an international ceasefire during the Covid 19 lockdown, fighting has continued in Afghanistan. The disease is known to have infected to date 39,693 and killed 1,472 people since the first confirmed case on the 27th February. Four decades of conflict have undermined a barely functioning health service, leaving the old especially vulnerable to the disease. After the virus first emerged in Afghanistan, the Taliban released a statement saying they considered the disease to be both a divine punishment for human wrongdoing and a divine test of human patience.

With 4 million people internally displaced, Covid 19 will undoubtedly have a devastating impact on refugees in particular. Dire living conditions within camps make it almost impossible for internally displaced people to protect themselves, with impractical social distancing in a one-room mud hut, normally home to at least 8 people, and handwashing a huge challenge. Drinking water and food are in scarce supply.

According to the UNHCR there are 2.5 million registered refugees from Afghanistan globally, making them the second biggest population of displaced peoples in the world,  yet it’s the official policy of many EU countries (Britain included) to forcibly deport Afghans back to Kabul, in the full knowledge that Afghanistan has been classified the “world’s least peaceful country”. In recent years forcible deportations from EU countries have tripled under the “Joint Way Forward” policy.  According to leaked documents, the EU were fully aware of the dangers for Afghan Asylum seekers. In 2018 UNAMA documented the highest ever recorded civilian deaths which included 11,000 casualties, 3,804 deaths and 7,189 injuries. The Afghan Government agreed with the EU to receive deportees out of fear that a lack of cooperation would lead to aid being cut.

This weekend is part of a national action to mark solidarity with refugees and migrants who are currently facing the hostile environment of harsh British policy and treatment. It comes within days of our Home Secretary Preti Patel having suggested we dump refugees and undocumented migrants trying to cross the channel on Ascension Island, to imprison people on disused ferries, to build “marine fences” across the channel, and to deploy water cannons to make huge waves to swamp their boats. Britain wholeheartedly committed to the war on Afghanistan in 2001, and now it dodges its international responsibilities to safeguard people fleeing for their lives. Britain should instead admit culpability for conditions forcing people to become displaced and pay reparations for the suffering its war has caused.