Activists Organize Vigil for Peace in Yemen in Senate 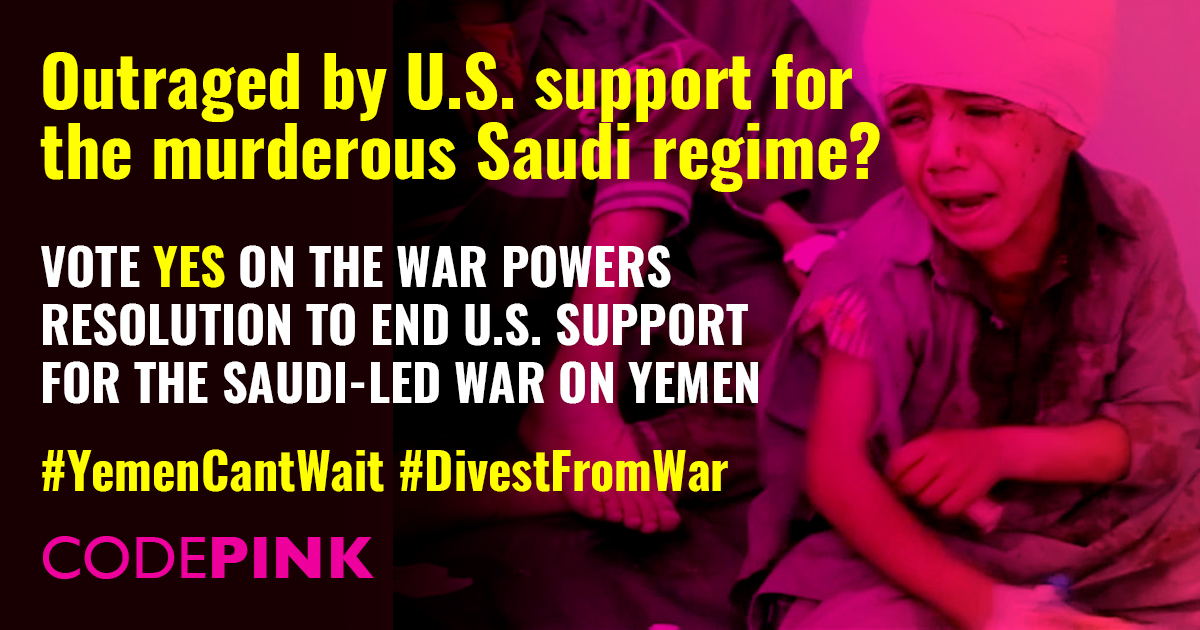 What: Vigil for Peace in Yemen
When: Thursday, August 15th at 11:30am
Where: Senate Hart Building Atrium

In honor of the one year anniversary of the infamous school bus bombing in Yemen in August of 2018, activists are organizing a vigil to honor the lives of the 40 children killed that day, as well as all Yemeni people who have lost their lives due to the Saudi-led war. The vigil will be held in the atrium of the Hart Senate Building at 11:30am, and will include a physical memorial for those killed in the bus bombing. The event sponsors, CODEPINK, STAND, Maryland Peace Action, Action Corps and Just Foreign Policy, call for an end to US logistical support and weapon sales for the Saudi war in Yemen.

The war on Yemen is the worst humanitarian crisis in the world right now. The Saudi bombing campaign regularly targets infrastructure and Yemeni civil society, with strikes not only on school buses but also marketplaces, hospitals, and funerals. Due to the war, 10 million Yemenis are on the brink of famine, and 85,000 children have died since 2015 from malnutrition caused by war.

Despite Congress voting to end US military support for the Saudi coalition, the administration declared a false national emergency to bypass Congress and approve 22 weapon sales to Saudi Arabia, including offensive weapons similar to the bombs used in the 2018 school bus bombing. The administration claims the sales are needed for Saudi to defend itself against Iran, but many members of Congress see this as a blatant attempt to circumvent Congressional oversight and an abuse of executive power.

“A year ago, a US bomb was used to kill 40 school children, and since then, the US has continued to sell more weapons that have killed more children,” CODEPINK co-founder Medea Benjamin states. “Children’s lives are more important than weapon’s sales. The US involvement in this tragedy must stop.”