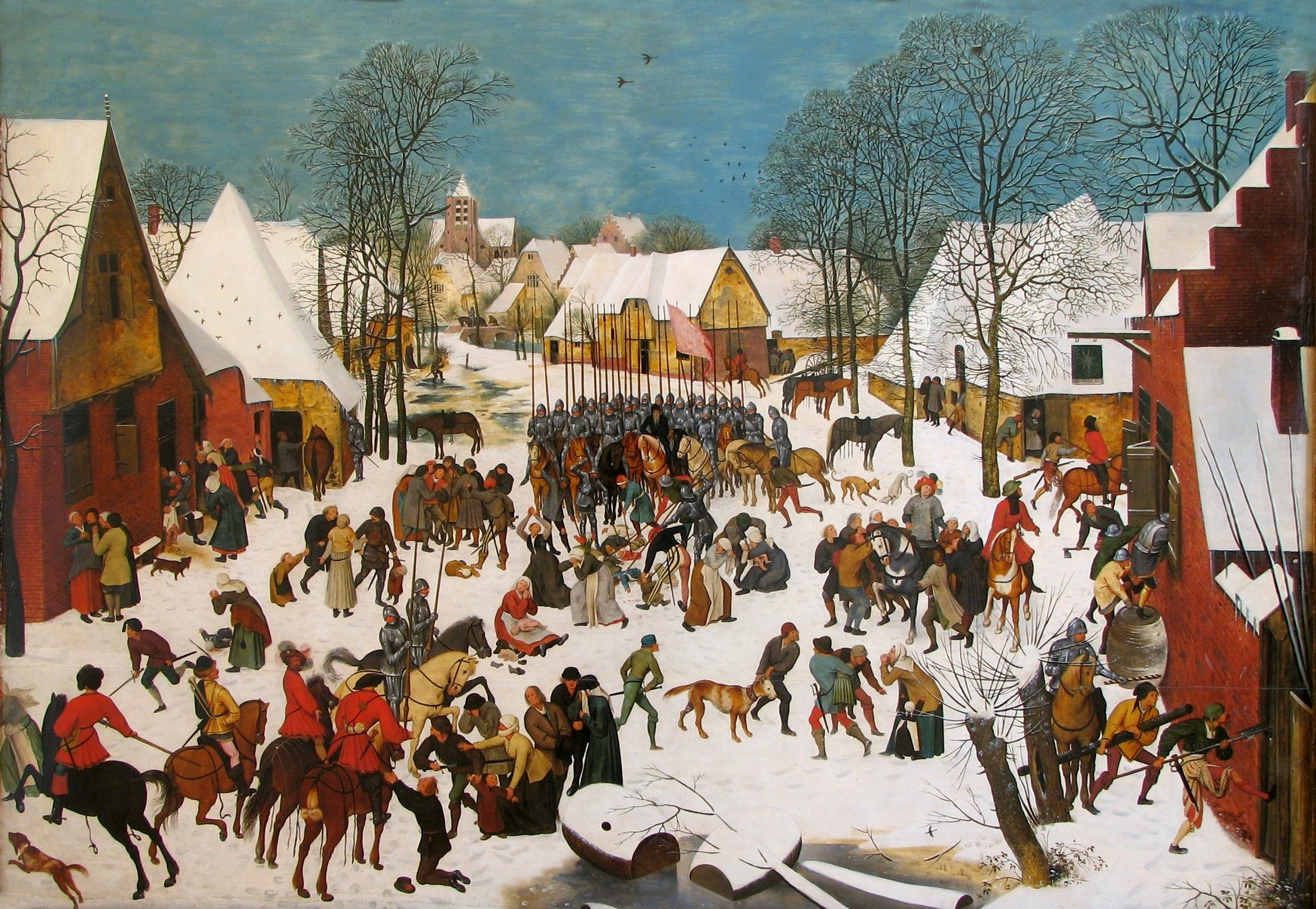 In 1565, Pieter Bruegel the Elder created “The Massacre of the Innocents,” a provocative masterpiece of religious art. The painting reworks a biblical narrative about King Herod’s order to slaughter all newborn boys in Bethlehem for fear that a messiah had been born there. Bruegel’s painting situates the atrocity in a contemporary setting, a 16th Century Flemish village under attack by heavily armed soldiers. Depicting multiple episodes of gruesome brutality, Bruegel conveys the terror and grief inflicted on trapped villagers who cannot protect their children. Uncomfortable with the images of child slaughter, the Holy Roman Emperor Rudolph II, after acquiring the painting, ordered another reworking. The slaughtered babies were painted over with images such as bundles of food or small animals, making the scene appear to be one of plunder rather than massacre.

Were Bruegel’s anti-war theme updated to convey images of child slaughter today, a remote Yemeni village could be the focus. Soldiers performing the slaughter wouldn’t arrive on horseback. Today, they often are Saudi pilots trained to fly U.S.-made warplanes over civilian locales and then launch laser-guided missiles (sold by Raytheon, Boeing and Lockheed Martin), to disembowel, decapitate, maim, or kill anyone in the path of the blast and exploding shards.

For more than five years, Yemenis have faced near-famine conditions while enduring a naval blockade and routine aerial bombardment. The United Nations estimates the war has already caused 233,000 deaths, including 131,000 deaths from indirect causes such as lack of food, health services and infrastructure.

Systematic destruction of farms, fisheries, roads, sewage and sanitation plants and health-care facilities has wrought further suffering. Yemen is resource-rich, but famine continues to stalk the country, the UN reports. Two-thirds of Yemenis are hungry and fully half do not know when they will eat next. Twenty-five percent of the population suffers from moderate to severe malnutrition. That includes more than two million children.

Equipped with U.S.-manufactured Littoral Combat Ships, the Saudis have been able to blockade air and sea ports that are vital to feeding the most populated part of Yemen – the northern area where 80 percent of the population lives. This area is controlled by Ansar Allah, (also known as the "Houthi”). The tactics being used to unseat Ansar Allah severely punish vulnerable people --those who are impoverished, displaced, hungry and stricken with diseases. Many are children who must never be held accountable for political deeds.

Yemeni children are not "starving children;" they are being starved by warring parties whose blockades and bomb attacks have decimated the country. The United States is supplying devastating weaponry and diplomatic support to the Saudi-led coalition, while additionally launching its own "selective" aerial attacks against suspected terrorists and all the civilians in those suspects' vicinity.

Meanwhile, the U.S., like Saudi Arabia and the UAE, has cut back on its contributions to humanitarian relief. This severely affects the coping capacity of international donors.

For several months at the end of 2020, the U.S. threatened to designate Ansar Allah as a "Foreign Terrorist Organization" (FTO). Even the threat of doing so began affecting uncertain trade negotiations, causing prices of desperately needed goods to rise.

On November 16, 2020, five CEOs of major international humanitarian groups jointly wrote to U.S. Secretary of State Pompeo, urging him not to make this designation. Numerous organizations with extensive experience working in Yemen described the catastrophic effects such a designation would have on delivery of desperately needed humanitarian relief.

Nevertheless, U.S. Secretary of State Mike Pompeo announced, late in the day on Sunday, January 10th, his intent to go ahead with the designation.

Senator Chris Murphy termed this FTO designation a "death sentence" for thousands of Yemenis. “90% of Yemen’s food is imported,” he noted, “and even humanitarian waivers will not allow commercial imports, essentially cutting off food for the entire country.”

U.S. leaders and much of the mainstream media responded vigorously to the shocking insurrection at the U.S. Capitol, and the tragic loss of multiple lives as it occurred; it is difficult to understand why the Trump Administration's ongoing massacre of the innocents in Yemen has failed to generate outrage and deep sorrow.

On January 13, journalist Iona Craig noted that the process of delisting a "Foreign Terrorist Organization" – removing it from the FTO list - has never been achieved within a timeframe of less than two years. If the designation goes through, it could take two years to reverse the terrifying cascade of ongoing consequences.

The Biden administration should immediately pursue a reversal. This war began the last time Joseph Biden was in office. It must end now: two years is time Yemen doesn't have.

Sanctions and blockades are devastating warfare, cruelly leveraging hunger and possible famine as a tool of war. Leading up to the 2003 "Shock and Awe" invasion of Iraq, U.S. insistence on comprehensive economic sanctions primarily punished Iraq’s most vulnerable people, especially the children. Hundreds of thousands of children died torturous deaths, bereft of medicines and adequate health care.

Throughout those years, successive U.S. administrations, with a mainly cooperative media, created the impression that they were only trying to punish Saddam Hussein. But the message they sent to governing bodies throughout the world was unmistakable: if you do not subordinate your country to serve our national interest, we will crush your children.

Yemen hadn't always gotten this message. When the United States sought United Nations’ approval for its earlier 1991 war against Iraq, Yemen was occupying a temporary seat on the UN Security Council. It surprisingly voted then against the wishes of a United States, whose wars of choice around the Middle East were slowly accelerating.

“That will be the most expensive 'No' vote you ever cast,” was the U.S. ambassador's chilling response to Yemen.

Today, children in Yemen are being starved by monarchs and presidents colluding to control land and resources. “The Houthis, who control a large part of their nation, are no threat whatsoever to the United States or to American citizens,” declares James North, writing for Mondoweiss. “Pompeo is making the declaration because the Houthis are backed by Iran, and Trump’s allies in Saudi Arabia and Israel want this declaration as part of their aggressive campaign against Iran.”

Children are not terrorists. But a massacre of the innocents is terror. As of January 19, 2021, 268 organizations have signed a statement demanding an end to the war on Yemen. On January 25, “The World Says No to War Against Yemen” actions will be held worldwide.

It was of another painting of Bruegel, The Fall of Icarus, that the poet W.H. Auden wrote:

"About suffering they were never wrong, 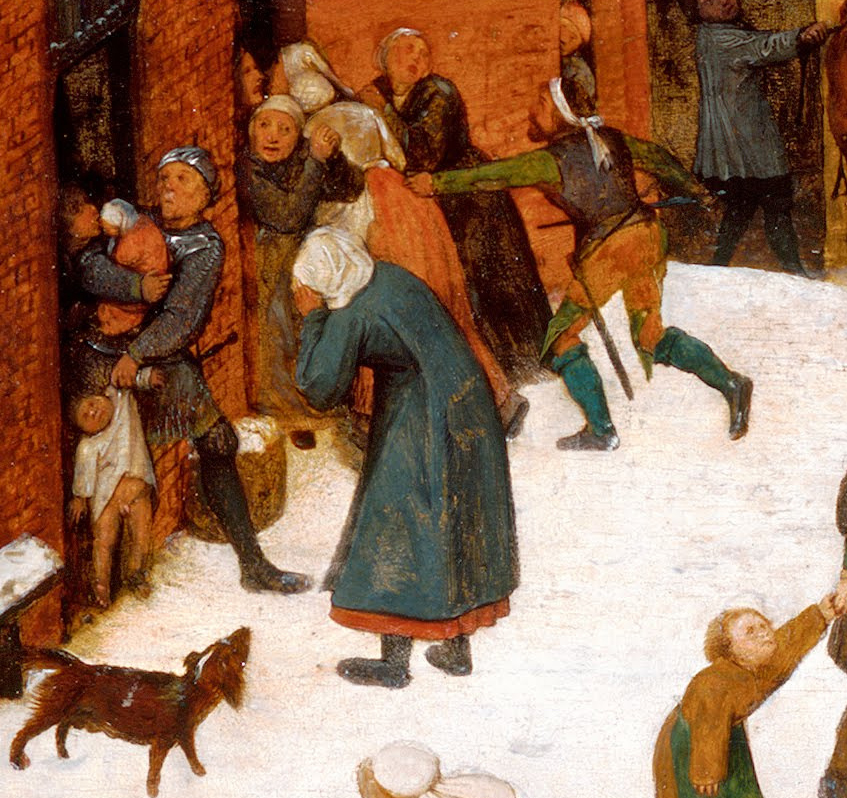 how it takes place

while someone else is eating or opening a window

or just walking dully along...

how everything turns away

quite leisurely from the disaster..."

This painting concerned the death of one child. In Yemen, the United States --through its regional allies, -- could end up killing many hundreds of thousands more. Yemen’s children cannot protect themselves; in the direst cases of severe acute malnourishment, they are too weak even to cry.

We must not turn away. We must decry the terrible war and blockade. Doing so may help spare the lives of at least some of Yemen’s children. The opportunity to resist this massacre of the innocents rests with us.

This article first appeared on the website of The Progressive Magazine.

Kathy Kelly ([email protected]) is a peace activist and author working to end U.S. military and economic wars. At times, her activism has led her to war zones and prisons.