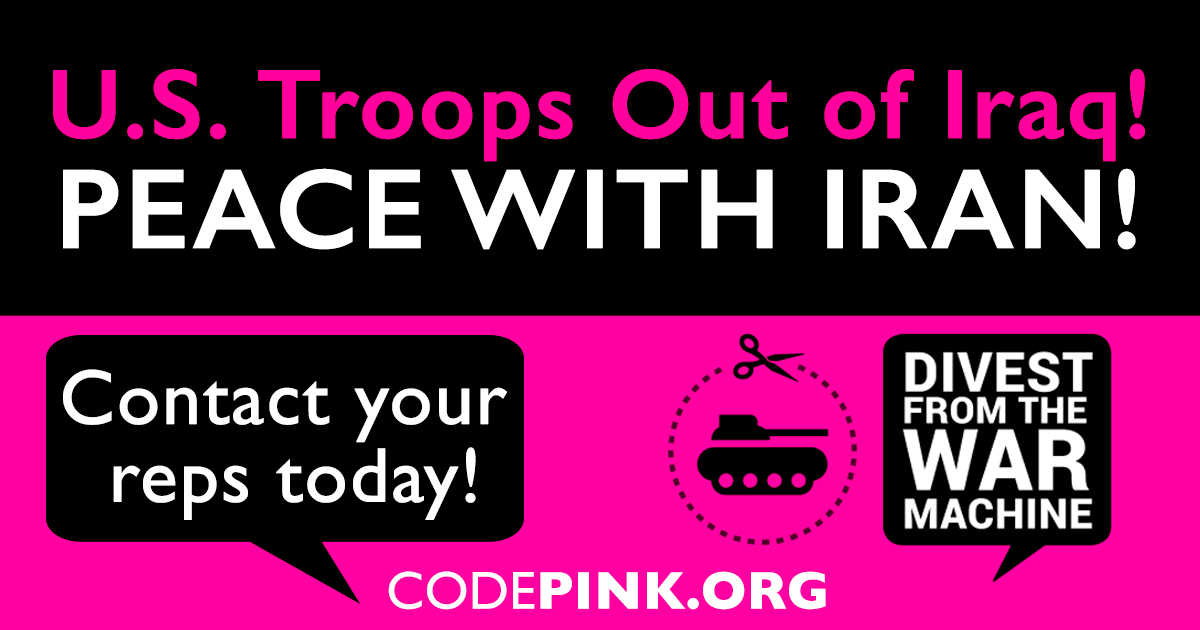 CODEPINK formed in 2003 in opposition to the Iraq war and has been working ever since to stop the Middle East wars. So we were horrified watching Trump’s latest strikes in Iraq and his decision to deploy more troops as we enter a new year.

After an increase in rocket attacks on U.S. bases in Iraq, including one that killed a U.S. military contractor on December 27, the Trump administration launched airstrikes on the Iraqi militia group Kata’ib Hezbollah, killing 25 members of the group. This attack has nothing to do with fighting the Islamic State and was carried out without any congressional approval, in violation of U.S. law. The strikes have also escalated the conflict with Iran, since the militia group—which is part of the official Iraqi security forces—has ties to Iran.

Contact your senators and representative and tell them that you oppose U.S. military attacks in Iraq, more U.S. troops in the region, and Trump’s war on Iran. Tell Congress to speak out.

Iraqi Prime Minister Abdul-Mahdi called the strikes a violation of Iraqi sovereignty and the attacks led to massive protests that besieged the U.S. Embassy in Baghdad. They have also incensed Iraqi political leaders, who are calling for a full withdrawal of U.S. troops. The withdrawal of U.S. troops is actually what Trump had been promising the American people. But rather than exiting, the Trump administration announced the deployment of 750 more troops to the region and possibly another 4,000 soon. This is in addition to the 5,200 U.S. soldiers already there.

While the Pentagon insists that the U.S. troop presence is solely to help Iraq fight ISIS, Trump himself has defined its mission as being to “also to watch over Iran”—putting Iraq in the middle of Trump’s war on Iran.

The Trump administration is without question solely to blame for the current crisis. We predicted that Trump’s reckless decision to withdraw from the 2015 nuclear deal with Iran and reimpose sanctions would backfire. We were right.

Even though the Iraqi protesters have left the U.S. Embassy in Baghdad, the crisis is far from over, especially with Trump tweeting such grotesque threats as, “...Iran will be held fully responsible for lives lost, or damage incurred, at any of our facilities. They will pay a very BIG PRICE! This is not a Warning, it is a Threat. Happy New Year!”

There is nothing happy about beginning this new decade with threats of war and more troops deployed to the Middle East. Contact Congress now and tell your representatives that you oppose U.S. military attacks in Iraq. Tell them to speak out against more U.S. troops being sent to the region and to call for the U.S. to make peace with Iran.

Don't forget to join us at nationwide protests this Saturday, January 4!