Meet the Big 5: How the Military-Industrial Complex Controls Politics 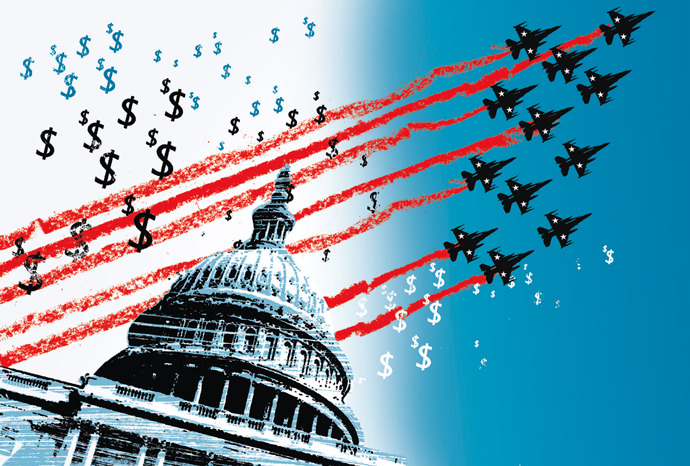 We talk a lot about the military-industrial complex, but what exactly is it, who makes it up, and why are they so important?

A new coalition of groups opposing their local war companies has joined together to form the War Industry Resisters Network, focused on corporate control over US foreign policy. The network includes CODEPINK, MAPA, Veterans for Peace, and more!

The political influence of several weapons manufacturers has made these companies extravagantly wealthy, all while the United States has wasted trillions of dollars on military adventurism and destroyed large parts of the Middle East and Central Asia, killing at least hundreds of thousands and displacing tens of millions. The 5 major companies with the most influence and power are:

We’ll take a look at these companies, their partnership with the US government, and their influence over the US Congress and the Executive Branch, under both Democratic and Republican presidents.

Why, despite public opposition, do military budgets continue to rise and arms sales to authoritarian governments continue?

To answer these questions we’ll be joined by experts including:

Neta Crawford is Professor and Chair of Boston University’s Department of Political Science and a Faculty Research Fellow at the Frederick S. Pardee Center for the Study of the Longer-Range Future at BU.  She is co-director and co-founder of the Costs of War project at the Watson Institute for International and Public Affairs at Brown University, which has recently been expanded with the addition of the “20 Years of War” research series.

William D. Hartung, a senior research fellow at the Quincy Institute for Responsible Statecraft. His work focuses on the arms industry and U.S. military budget. He was previously the director of the Arms and Security Program at the Center for International Policy and the co-director of the Center’s Sustainable Defense Task Force. He is the author of Prophets of War: Lockheed Martin and the Making of the Military-Industrial Complex (Nation Books, 2011) and the co-editor, with Miriam Pemberton, of Lessons from Iraq: Avoiding the Next War.

Christian Sorensen, an independent journalist mainly focused on the U.S. war industry. An Air Force veteran, he is the author of Understanding the War Industry, published by Clarity Press. He is also a senior fellow at the Eisenhower Media Network, an organization of independent veteran military and national security experts. His website is warindustrymuster.com, where one can view his monthly distillations of Pentagon contracts.

In his farewell speech President Dwight D. Eisenhower, a man who had helped build up the military for World War II and commanded Allied Forces in Europe, famously warned:

“In the councils of government, we must guard against the acquisition of unwarranted influence, whether sought or unsought, by the military–industrial complex. The potential for the disastrous rise of misplaced power exists, and will persist.”

This warning has become a reality. To take the country back from the malevolent military-industrial complex, the corporations that make it up must be countered locally.

Join us to find out how you can take part! Register to attend!

First of a series of webinars organized by the War Industry Resisters Network.