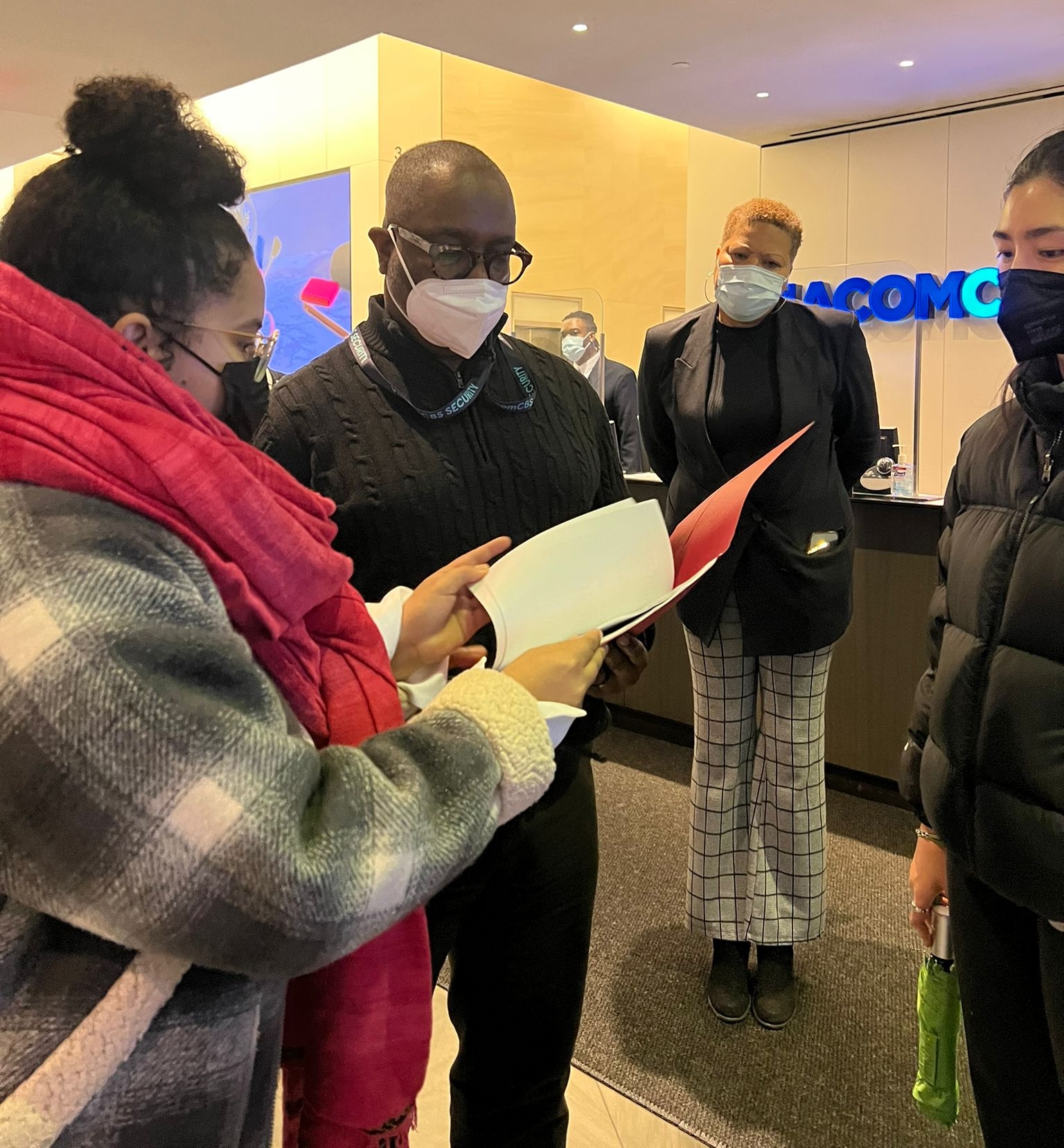 February 3rd, 2022 — On a cold, rainy winter day in New York City, CODEPINK and partners from The People's Forum NYC made the trip to the ViaComCBS building in Times Square to hand-deliver our petition of over 2,000 signatures to The Daily Show studio, urging Trevor Noah to stop spreading dangerous misinformation about China.

On The Daily Show episode “Why Is China in Africa?” (12/16/21), Trevor Noah resurrected the false, Trump-era narrative of China using “debt-trap diplomacy” with African nations. Noah devoted air-time to disparaging China as a predatory loan shark when this myth has already been debunked several times now by experts like Dr. Deborah Brautigam, a Sinologist-Africanist professor of international development at Johns Hopkins University.

CODEPINK’s letter, with nearly 2,050 signatures, calls on Trevor Noah to stop using his influence and platform at The Daily Show for war and mis-educating his audience with anti-China rhetoric. You can read the full letter here.

Although CODEPINK was not able to talk directly with anyone from The Daily Show studio, we were able to leave the petition with the Head of Security for the ViacomCBS building. Upon receiving no response, we also sent the petition by mail to The Daily Show's public address.

The Daily Show is an Emmy- and Peabody Award-winning program that describes itself as "provid[ing] coverage of (and catharsis from) daily events through a sharp, reality-based lens." Jokes not only reveal our values, but reinforce them, and because of that fact, it's clear that Trevor Noah and The Daily Show writers think of China as an evil cartoon villain in the form of a loan shark, preying on naïve African nations.

Comedy and satire are not incompatible with accurate reporting, in fact, they are strengthened by a foundation in correct analysis. Unfortunately, late night satire news shows have struggled in the post-Trump era and incidentally adopted Trump-era talking points, such as the myth of "debt-trap diplomacy" and other instances of China-bashing.

“The age of disinformation extends far beyond Trump’s presidency,” said CODEPINK co-founder Jodie Evans. “It’s not a coincidence that the mainstream media continues to sensationalize and inflate the ‘threat’ of China and Russia.”

Lauren Gonitzke is the assistant for the China Is Not Our Enemy campaign at CODEPINK, a women-led grassroots organization dedicated to ending U.S. wars and militarism.