Zero Damn Truth: US Propaganda and the Killing of Bin Laden 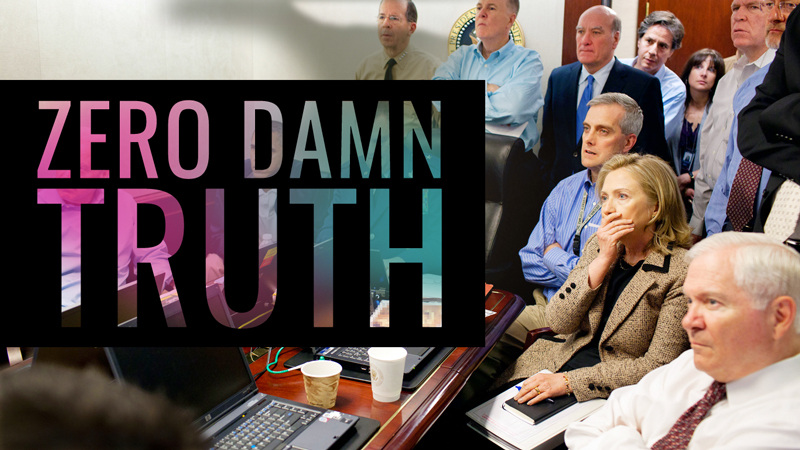 "...all that propaganda from the White House was laughable to folks like me - anyone from that town where they found him knows Osama Bin Laden could not have been living there without the army knowing. It's a military town and everyone knows each other. So the silly stories Americans bought were just that - totally silly to the rest of us!" - Pakistani woman

But actually "these stories" come along (and out) frequently, in mainstream news and Hollywood films. Their elements include: the One Bad Guy whose removal by lethal means will improve the world; agents of the US government finding out "Bad Guy secrets" by any means necessary, including torture; and the unmatched courage and skill of the (usually military) killers of the One Bad Guy. Back home, civilians rejoice, and the exceptionalism of the United States is embodied in our heroes/heroines.

Four years after the publicly celebrated assassination of Bin Laden, journalist Seymour Hersh has finally been able to shine a light on the official story, in an article published by the London Review of Books: "The Killing of Osama Bin Laden."

Here are details of the official story of the killing of Bin Laden (OBL) compared to the actual events, painstakingly established by the same reporter who exposed the truth about the My Lai massacre in Vietnam. All quotes below are taken from Hersh's piece.

The official story: The tracking of Bin Laden's couriers, and (a later story "pushed by [John] Brennan and [then-CIA director] Leon Panetta") the torture of prisoners in US custody, helped lead to information about OBL's location. The "case" for torture was made explicitly in "Zero Dark Thirty" with assistance from the CIA. See the PBS "Frontline" "How the CIA Helped Make Zero Dark Thirty" for more on this sordid justification.

But actually: OBL was under house arrest and constant surveillance by the Pakistani government, in a military town (Abbottabad). Information on Bin Laden's came "from a former senior Pakistani intelligence officer who betrayed the secret in return for much of the $25 million reward offered by the US." The torment of helpless men by various means including waterboarding gave ZERO information on Bin Laden''s whereabouts.

The official story: The US government and military conducted the entire action by themselves, with no help from or even prior knowledge of the Pakistani government.

But actually: Pakistani military top brass and "General Ahmed Shuja Pasha, director general of the ISI [Pakistan's CIA]" in particular, knew that the US assassination operation would take place. Indeed, Pakistani military assistance was critical to the success of the mission, for they "made sure that the two helicopters delivering the Seals to Abbottabad could cross Pakistani airspace without triggering any alarms."

The official story: Special Ops forces, and the Hollywood-celebrated Navy Seals in particular, executed their difficult operation skillfully and as planned.

But actually: One of the Black Hawk helicopters crashed inside OBL's compound, injuring some on board, causing a fire, slowing and complicating the operation.

The official story: If OBL had immediately surrendered, he would have been taken alive into custody. Brennan announced that there was a firefight between the Seals and OBL.

But actually: A former, very experienced Navy Seal commander told Hersh "we were not going to keep bin Laden alive — to allow the terrorist to live. By law, we know what we're doing inside Pakistan is a homicide." OBL was an invalid, hardly the battle-ready Bad Guy featured in films. There was no firefight.

The official story: The 6 Navy Seals killed OBL and 5 others including a woman "in self-defense".

But actually: Of all the lies in the official story, besides the justification of torture to obtain info on OBL's whereabouts, this is the most sinister. OBL was unarmed when he was shot and killed, the single fatality from this house raid. The Seals could have captured him and put him on a helicopter, but they had other orders. To give details to the "firefight" story and maybe to make the Navy Seals sound more bad-ass, Brennan, then-senior counterterrorism advisor, now head of the CIA, claimed in a day-after statement to the media that the Seals had killed OBL's brother and son, plus a courier and a woman "said to be shielding bin Laden."

The official story: OBL was running "a command centre for al-Qaida operations" from his home. The Seals recovered "a treasure trove" of 15 computers, which showed that OBL was still an "active leader in al-Qaida" according to an unnamed official who talked to reporters shortly after the assassination.

But actually: The Seals grabbed some papers and books, which were turned over to the Pakistanis and generated ZERO US intelligence reports. This was no "command center." OBL was not directing operations for what was left of Al-Qaida in Afghanistan by that point, and had not for years.

The official story: OBL's body was buried at sea, to avoid a gravesite that would draw followers to revere him. Brennan, who appears as Senior Official Liar in Hersh's account, told reporters at a press conference that the burial was done according to Islamic law -- which Muslims found ridiculous and insulting.

But actually: Freedom of Information Act requests have turned up exactly ZERO photos of this supposed Islamic burial. OBL's body parts were dropped from an airplane over the Hindu Kush mountains. The Seal team had "torn bin Laden's body to pieces with rifle fire" -- and bragged about that to their buddies. The White House was being pushed by the media to explain what happened to OBL's body, and they came up with a story that sounded phony but couldn't be refuted at the time.

As images from the young people celebrating at the White House fence filled my TV screen in May 2011, I was busy collating CODEPINK-ers' responses to the event, far more thoughtful than any mainstream commentary. You can read those here. Too bad they did not appear in the media.

Lies generate more lies, and government propaganda tells the story that our national vanity wants to hear. The official story of the killing of Osama Bin Laden repeats on the micro level the lies about the US war in Afghanistan - the longest foreign war in our history. That it was necessary for US national security. That torture was part of what we "had" to do. That it required courage by heroic men who act in self-defense. That it was a meaningful response to terrorism. That there are a set number of "terrorists" or "Bad Guys" in the world, and killing them will solve terrorism.

Too bad moviegoers can't get their money back from seeing "Zero Dark Thirty." Too bad a major motion picture will not be made based on the factual story.

Too bad the young people who celebrated the assassination of OBL won't return to the fence of the White House and reflect, on national TV, on their uncritical acceptance of the official story.

Too bad the mainstream media aren't compelled to apologize for being eager participants in government propaganda.

Too bad John Brennan is still the director of the CIA.

Too bad the stories of the courage of "ordinary" Afghans, Pakistanis, Yemenis don't attract the funding of major producers and the talents of big-name filmmakers. For a powerful film that DOES tell some of those stories, including the tragedy of US drone strike victim Abdulrahman Al-Awlaki, see "Dirty Wars."

Too bad the human beings that the US government has abducted, tortured, kept in detention for years (including some cleared by the US military) and murdered can't get their lives back.