YT is Alive and Well and Living in Barquisimeto 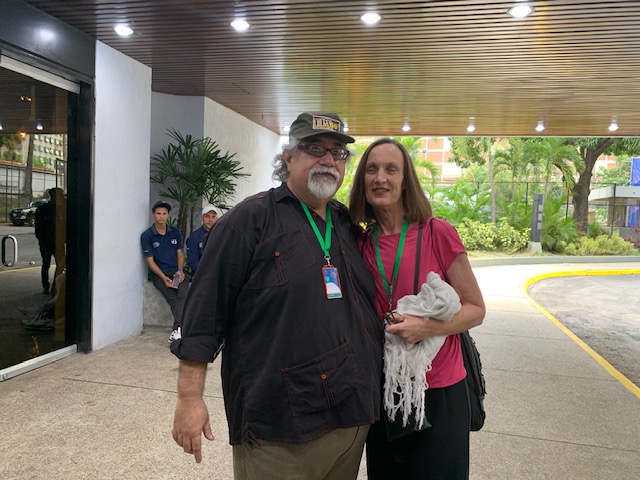 This is my friend YT.  We ran into each other one August afternoon at the Foro de Sao Paulo Cara.

Teri Mattson is the Latin America campaigner for CODEPINK. She recently returned from an Embassy Protection Collective delegation to Venezuela. In March, she led an Anti-Sanctions Campaign delegation to Venezuela and remained through May. Her personal anecdotes are reflections of her experiences living among working class Venezuelans in urban and rural communities over the past 12 years.

I met YT last March in Barquisimeto, three weeks after the national power outage.  Barquisimeto is the fourth largest city in Venezuela and was an itinerary destination on a delegation organized by The Campaign to End US and Canada Sanctions against Venezuela. It is impossible to understand the “non-targeted” impact of US unilateral sanctions without visiting Venezuela.  The city of Barquisimeto is located in the western state of Lara and serves as the state capital. Lara is normally a six hour drive from Caracas, but this particular trip took eight.

It is important to understand Venezuela in all of its complexities which means venturing out of the Capital's boundaries.  Caracas holds the largest population of the country and is the seat of the government; things function relatively well here despite the arduous obstecticles imposed by US unilateral sanctions.  Although expensive, people have access to food, electricity, water, public transportation. Schools are open, as are most medical facilities. In contrast with this, the lengthy drive from Caracas to Barquisimeto was interrupted by multiple military and police checkpoints on the highway, and it was easy to see why.  Signs of civil unrest littered the roadway: remnants of burning tires and empty tear gas canisters were in plain sight. I have made this trip many times over the last ten years and each time the roadside displays more and more shuttered businesses and fewer places to stop and feed a delegation. There are less and less people in the streets when passing through towns and in between lay wider and wider swaths of fallow land.  The scene makes clear how the nation’s inability to import food, medicines and equipment has strangled domestic solutions, as well as, many attempts at self-sufficiency. Both situations add to the migration of people from various parts of the country. The problems here are internal and external; US unilateral sanctions being a large external contributor. The possible solutions are internal and external as well. The resiliency of the Venezuelan people inside the country offering the greatest of possibilities.

A few hours out of Barquisimeto, a call came in while on the road.  A man lay dying in a hospital that was lacking proper medicine and supplies.  Word on the street was that we were traveling with a doctor. After a hindered eight hours on the road, we arrived to a darkened city.  No electricity; no running water. Barquisimeto had not yet recovered from the national power outage. The patient was found waiting in our hotel lobby.  I would later discover him to be YT. Word travels fast here with or without phones and wifi. Communication, in all its forms, is often a matter of life and death.  The doctor grabbed his bag and the suitcase in which the delegation had collectively stored the medicines and supplies brought from North America. The supplies were critical, as well as, basic items no longer accessible to Venezuela due to a multitude of unilateral financial sanctions affecting access to international banking, trade and finance.

YT was easy to diagnose.  He suffered two conditions: long term complications due to untreated diabetes, which is common here because of the inability to import insulin, and a kidney stone with severe infection bordering sepsis.  The suitcase contained enough insulin to begin addressing the diabetes. Several antibiotics traveled with us as well. Once administered, both would allow YT to travel to Caracas and await more extensive care.   Additionally, our doctor provided a lengthy consultation on holistic medicines and proper nutrition...easier to prescribe than implement, but more accessible than trying to import insulin and antibiotics. We left YT with a discouraging prognosis and would not know for several days if he would survive the infection or continue to manage the diabetes.   Word eventually reached our delegation. YT had passed the kidney stone and fought the infection. Good news, but how long would he survive the advanced diabetes without insulin? With the help of Cuba and many Venezuela solidarity organizations, as of early August YT had survived five months and counting! Imagine how happy I was to be greeted by him on a Thursday afternoon in Caracas.