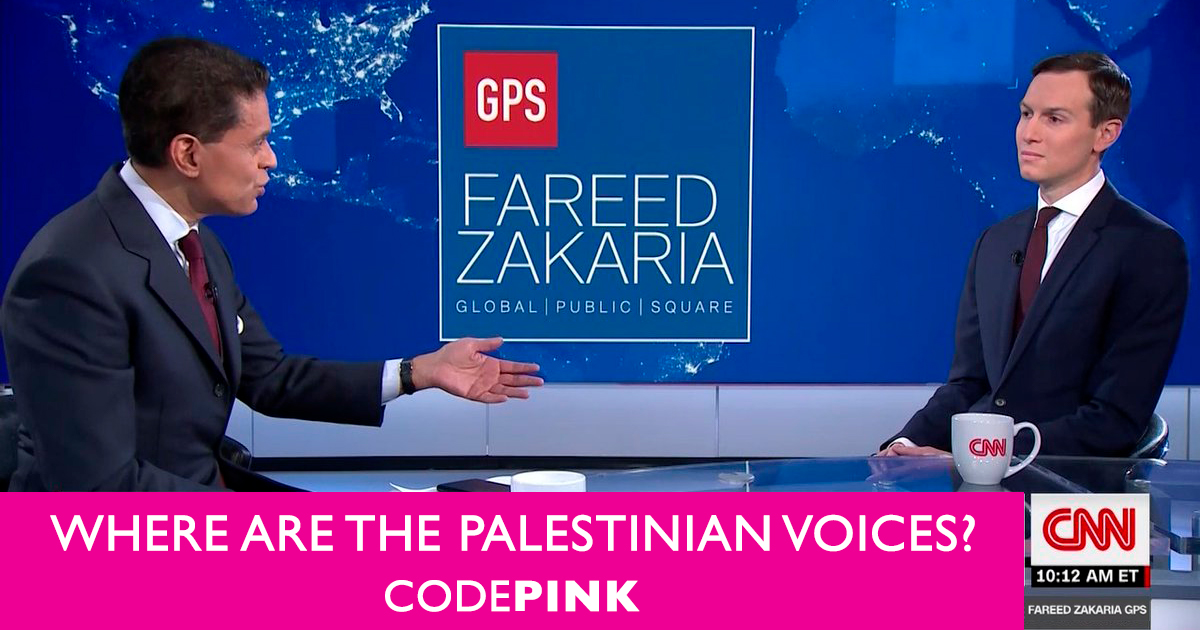 It has only been two days since you helped us flood the inbox of CNN’s Fareed Zakaria and today we got the news: this Sunday Zakaria will host Saeb Erekat.

Erekat isn’t among the grassroots Palestinian voices we suggested — Noura Erakat, Yousef Munayyer, Zaha Hassan, Diana Buttu, Mustafa Barghouti — but as the lead negotiator for the Palestinian Authority, he is well-positioned to explain why the Trump administration’s so-called “peace plan” has nothing to do with peace and was rejected in advance.

It’s thanks to you that CNN isn’t providing an only pro-apartheid view, and we need to keep the momentum going. If you haven’t yet taken our action to encourage Zakaria and CNN to give a platform to the grassroots movement for Palestinian rights, do so now.

After emailing Zakaria, plan to watch his show this Sunday at 10 AM EST on CNN and tweet or comment on Facebook. Here are some sample tweets:

Together we will continue until Palestine is free!

Our previous email to you:

Last Sunday, February 2, on CNN’s GPS, Fareed Zakaria gave Jared Kushner a wide-open stage to spew vile racism and disrespect for Palestinian rights. As Kushner touted his 180 “peace plan,” no Palestinians were included in the discussion to address that the plan has nothing to do with peace but is a recipe for permanent occupation and apartheid. The Palestinian people have rejected it unequivocally.

Zakaria can and must do better! Will you help us flood his inbox with requests that this Sunday, February 7, he have a Palestinian on the show to refute what Kushner said? If enough people contact him, he will likely meet our demand.

Email Zakaria! Ask him to balance his show by having a Palestinian on this Sunday. If you are located outside the US, Canada, or Australia, sign this letter instead.

The apartheid plan, introduced during a joint Trump-Netanyahu press conference, would annex 30 percent of the West Bank, affirm Jerusalem as the undivided capital of Israel (it’s not!), leave all illegal Israeli settlers in place, and offer Palestinians no viable options for self-determination.

Zakaria must correct the imbalance of last week’s show. There are plenty of Palestinian analysts and experts to choose from. We recommend:

Help us flood Zakaria’s inbox with the demand that he respect the human rights, dignity, and self-determination of the Palestinian people. Tell him to bring their voices into the discussion this Sunday, February 7.