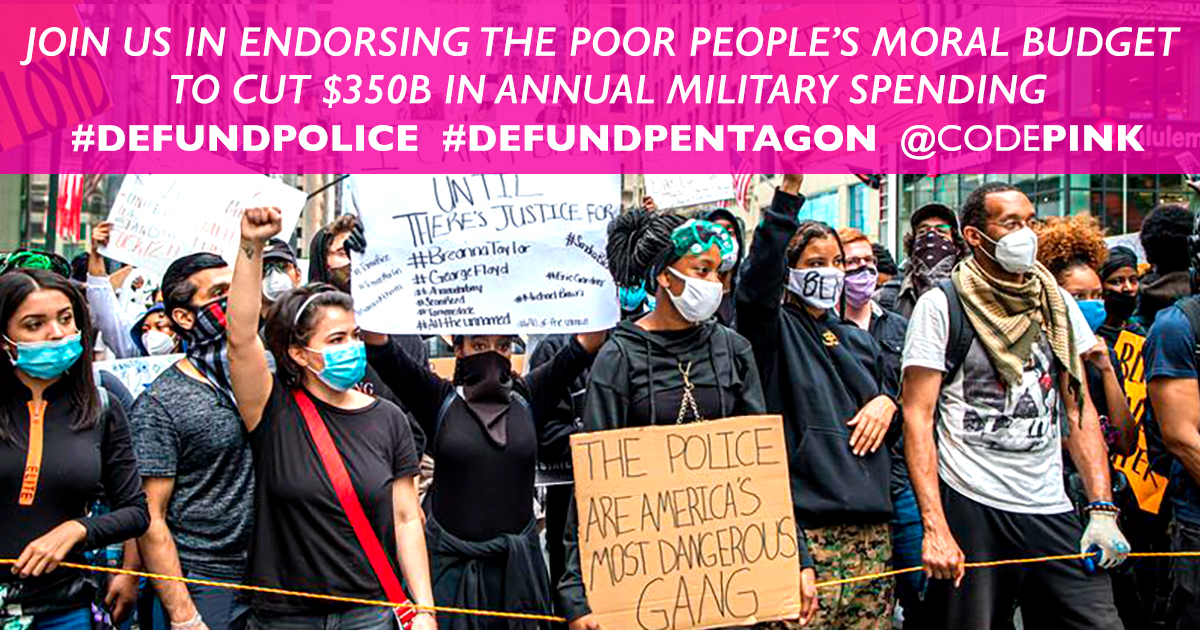 After a week of inspiring protests against police brutality around the country, far-right Senator Tom Cotton is in a tizzy. “First it was ‘abolish ICE’. Now they want to defund the local police who keep us safe. What is next—disband the military?”

Take a look at the Poor People’s Campaign Moral Budget, which calls for deep cuts in annual military spending and add your name as an endorser. Once we get enough people to endorse, we can work with members of Congress—other than Sen. Cotton—to cut Pentagon spending and invest in the needs of the people.

Yesterday, Reverend Barber led a day of fasting to lift up the demands of the people in this moment of reckoning. “Our movement must push for political and economic transformation to end police violence and all violence against black, brown, and poor people,” he pleaded. Invoking the need to address the triple evils of racism, poverty, and militarism, he laid out specifics:

The Poor People’s Campaign budget is laid out in full detail: Cutting $350 billion from the Pentagon, which is about half its budget, would make the nation and the world more secure. In addition, $886 billion can be gathered annually from taxing corporations, Wall Street, and the one percent. These savings, as well as the money that will be saved from defunding police departments and ending mass incarceration, will then be used to address climate change, lift people out of poverty, provide education, and much more.

Check out the Poor People’s Campaign Moral Budget and add your name as an endorser. Once we get enough signatures, we will reach out to progressive champions in Congress to work with them on cutting the Pentagon and bringing a moral budget based on peace and justice to the people.

Speaking at Riverside Church in 2017, 50 years after Dr. Martin Luther King Jr. spoke there, Reverend Barber said: “The question today is are we going to be on the side of violence or nonviolence?” After the murders of George Floyd, Breonna Taylor, Ahmoud Arbery, and so many before them, the people of this nation have made it clear that we will no longer tolerate police violence. People in New York City, D.C., Los Angeles, Atlanta, and all across the U.S. are taking our commitment to nonviolence to the streets. Now, we need Congress to legislate it. Add your name now as an endorser of the Poor People’s Campaign Moral Budget!

Towards an end to racism, poverty, and militarism,

P.S. Join us this Sunday, June 14 at 5PM PT for a screening of “We Cried Power,” a documentary about the Poor People’s Campaign.