Yes, CODEPINK is STILL here, still against the wars...

[caption id="" align="alignright" width="180" caption="A CODEPINK protester on the Washington Mall in D.C. this March, at the national mass march marking the 6th anniversary of the Iraq War."] 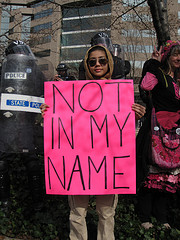 At CODEPINK, I'm responsible for reading and responding to our “info” email address. I recently received an email that included this: “Code Pink is a bunch of hypocrites.  Why are you remaining silent while Obama sends 27,000 more young Americans to a surge in Afghanistan?"

There’s been a steady stream of this kind of criticism over the last few months, and I’d like to make a few observations to folks who only know of CODEPINK through Fox News or other mainstream media coverage -- which does not tell the whole story.

I’d like to say first that it’s a compliment that when Americans think of loud-mouthed, hyperactive, ubiquitous protesters, they think of CODEPINK. After all, we're a relatively small women-led organization that’s only been around since 2002! Thanks – we do what we can!

In January, CODEPINK women were happy Obama was elected president in the first fair election since 1996. A well-spoken, intelligent former community organizer and constitutional law expert who opposed the US invasion of Iraq in 2003, who is also the first African-American to become president: we plead “guilty” to feeling the same hope and enthusiasm that millions of Americans, and hundreds of millions around the world, felt watching his inauguration. That doesn’t mean every CODEPINK member voted for him (I know personally several who did NOT) nor that we expected him to turn around on a dime the military-industrial-media complex that led to the invasions of Afghanistan and Iraq, and their protracted and hideously expensive occupations. But we did hope – and drew in a deep breath…

… and let it out in angry frustration as the Iraq war dragged on endlessly. We've continued our "disruptions." Here’s some of what does NOT get on Fox or CNN: holding a weekly peace vigil in Laramie, WY; doing phone-a-thons in Times Square, New York City; introducing a resolution in the New Mexico legislature asking Governor Richardson to bring the National Guard Home; offering alternatives to the military in high schools; using Facebook and Twitter to get our messages out; meeting with congressional staff in district offices and in DC; helping to open Under The Hood Café & Outreach Center in Killeen, Texas, home of the largest military base in the US; protesting the Army Experience Center in Philadelphia that makes war seem like a videogame; calling for grounding the drones that have killed hundreds of civilians in Afghanistan and Pakistan – at the gates of Creech Air Force Base in Nevada. And a lot more. Our activism is part of what author Paul Hawkens calls “Blessed Unrest,” the struggle of “ordinary” people for justice in a time of extraordinary militarism and environmental crisis.

We've also spoken out publicly in several press statements (available on our web site, www.codepinkalert.org). On Feb. 27, we put out a statement titled: “CODEPINK calls Obama's announcement of timetable, residual troops in Iraq a 'broken promise.’” Our language got harsher exactly a month later on March 27, when, in response to Obama’s so-called “new strategy” on Afghanistan, we “denounced” the surge, adding, “CODEPINK calls for a reallocation of war funds into the needs of the American people: health care, education and infrastructure, a rapid withdrawal of all U.S. troops from Afghanistan, the closing of bases, and tireless diplomatic engagement with Afghan and Pakistan governments.” Nothing could be plainer or more uncompromising. We have NOT been silent.

And no, we haven’t “picketed” the White House, or set up a daily vigil there as CODEPINK did in its beginnings in winter 2002-03. Not yet anyway. But the reason has nothing to do with Obama’s wars being more acceptable than Bush’s -- it's because Congress, not Obama, bears a heavy weight for these wars. Congress has voted for the overall military budget that increases each year, and voted for so-called “emergency” supplemental appropriations that Obama said he would end – but relied on yet again this spring. Congress shirks its collective responsibility, and we are calling them to account for that. Members of Congress need to demand an exit strategy from Afghanistan and an earlier departure date from Iraq; to call as witnesses to its hearings members of the armed services who could testify to the wars’ horrors, as IVAW members did in spring 08 in their historic “Winter Soldier” hearings; to commit to restitution funds and refugee resettlement assistance for Iraqis, Afghans (and sadly now, in the world’s worst new refugee crisis, Pakistanis); and to stand up to rightwing name-calling, finally, and do the right thing: defund the wars and rebuild our country! For now, our focus is there.

So, our question to folks who are wondering what CODEPINK is doing: What are YOU doing? If the reply is, “I’m too BUSY!”,  like the woman from Portland, OR who called our San Francisco office this week to criticize, I can only reply: “Then YOU are not working to end the US military presence.” One man, at least, may be inspired to help us in our work -- after I emailed him some information about the upcoming National Media Day on Afghanistan, on Sept. 14, to get the word out on how to end the war, he wrote back to say: “Thank you for the resource information.  I will certainly check it out.  I’m glad you are spearheading a media day.  How can I help?”

And if anyone wants to start a vigil in front of the White House opposing Obama’s escalation of the war in Afghanistan, please let CODEPINK know. We have no monopoly on protest, and we’ll be happy to see you in action!