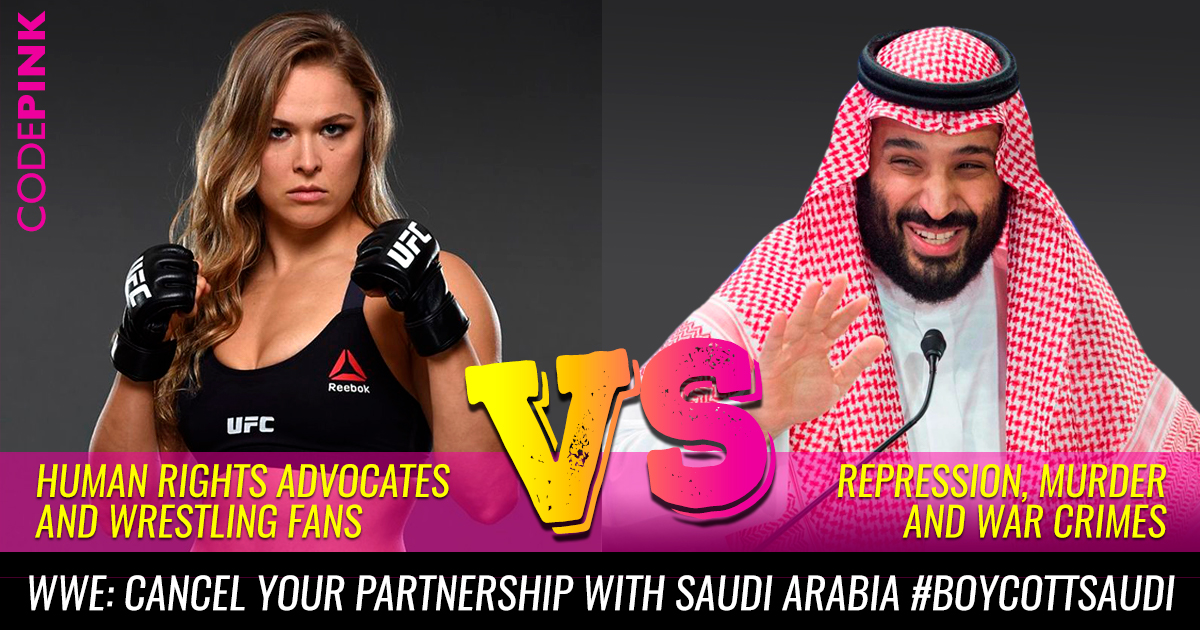 After the gruesome murder of Washington Post journalist Jamal Khashoggi, the international and even corporate community cried out for justice. Richard Branson of Virgin suspended talks with Saudi and Blackstone Group, Uber, and Goldman Sachs all canceled their plans to attend a major investment conference in Riyadh. Now Endeavor talent agency has returned $400 million dollars of investment funds to Saudi Arabia!

World Wrestling Entertainment (WWE) Inc. has two events planned in Saudi Arabia in 2019 - May 3 and November 1 - but fans have been pressuring them to end their partnership, even going so far as to cancel their WWE Network subscriptions in protest of the company continuing to work with the murderous Saudi regime.

Sign our letter to the WWE telling them to take a stand for imprisoned Saudi women activists, the people of Yemen, and Jamal Khashoggi. Tell them to break up with Saudi Arabia!

Right now numerous Saudi women activists are in prison and suffering from torture for the simple acts of advocating for their basic rights. The Saudi-led war on Yemen has created the worst humanitarian crisis on earth, so bad that every ten minutes a Yemeni child dies of malnutrition as a direct result of the Saudi bombing campaign. Saudi crown prince Mohammed bin Salman (MbS) continues to not be held accountable for the gruesome murder of Washington Post journalist Jamal Khashoggi, a murder he ordered.

Women in Saudi Arabia are held under a repressive male guardianship system that, from birth to death, requires them to have permission from a father, husband, brother, son, or uncle in order to engage in basic life tasks such as traveling, marrying or divorcing, and obtaining medical treatment. Saudi Arabia’s repressive policies towards women are why women WWE wrestlers are not permitted to perform in the country.

As human rights advocates and WWE fans, we are calling for you to cancel your partnership with Saudi Arabia.