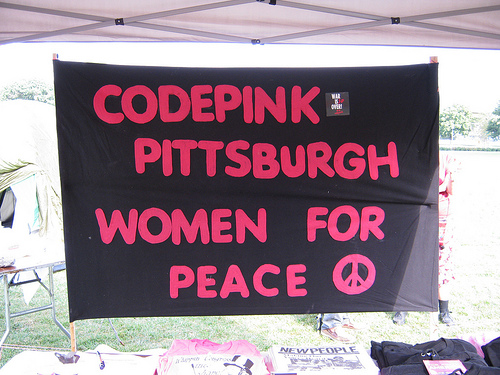 The G20 experience for the Women’s Coalition began with the formation of the Women’s Coalition itself. In early June, women from CODEPINK and the Women’s International League for Peace and Freedom joined together to become the Women’s Coalition. Early on we developed the Women’s Tent City as our focus for the G20. Our purpose was to draw attention to the suffering of refugees, 80% of whom are women and children, and the connection between those 16 million refugees and the perpetual violence that is either initiated or subsidized by G20 countries, as well as by the wars launched by the United States in Iraq, Afghanistan, the countries continual military and financial support to Israel to continue the occupation of Palestine.

Our initial vision was for a week long, overnight tent city. This vision faced challenges from restrictions on overnight camping, and city secret service plans for use of the park. The layering-on of these restrictions, the inconsistency of their application, and evidence that other events did not preclude our use of the park led us into federal court action. Represented by the ACLU and the Center for Constitutional Rights, with Francine Porter speaking for the Women’s Coalition, we requested an injunction against the city to require the city to stop presenting obstacles for our use of the park. Prior to the lawsuit, the Women’s Coalition had modified the request from a week of overnight camping to two days of daytime use of the park. Our lawsuit was successful and on September 21st the Women’s Tent City set up encampment early at Point State Park. 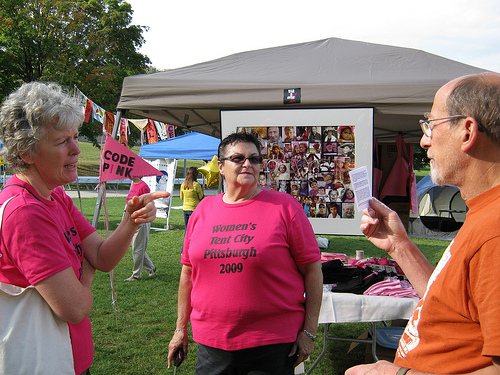 Thanks to the organizational talents of Lee Calhoon and her well-crammed truck, we had everything we needed to make our tent city rise from the ground. We soon had three welcome tents and a children’s activity tent. We were joined by tents representing various groups who endorsed our efforts from; IRAQ VETS AGAINST THE WAR, CHAPTER 61, THE PALESTINE SOL IDARITY COMMITTEE OF PITTSBURGH, STUDENTS FOR JUSTICE IN PALESTINE, THE GREEN PARTY, THE ANTI WAR COMMITTEE OF THE THOMAS MERTON CENTER, BLACK VOICES FOR PEACE, VETS FOR PEACE, G 6 BILLION, BAIL OUT THE PEOPLE, AND THE COLUMBIA SUPPORT NETWORK.

In spite of rain from drizzle to downpours, we had two days of excellent presentations and discussions on the impact of globalization, war, economic imperialism, and economic displacement on women’s lives. On both days we enjoyed lunch by Seeds of Peace and Everybody’s Kitchen. Although traffic was lighter than usual for Point State Park, a number of passers-by stopped for literature and conversation. We also were very pleased with the media coverage that let the city and country know that there was an active women’s anti-war group in Pittsburgh. In a September 21st article in the Pittsburgh Trib Review, Carl Prine writes, "most of the organizers are women, reflecting a shift in Pittsburgh's peace movement toward female leadership".  See entire article here. 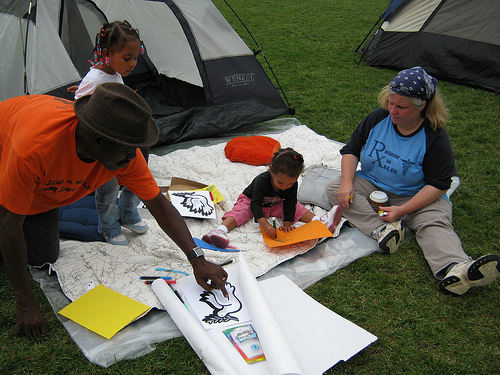 Our events concluded with participation in the People’s March. Women’s Coalition members gathered in Oakland and formed a spirited women's contingent and feeder march into the main rally whic h was forming at 5th and Craig. Members met women securing a large white peace dove in the air, made by Elizabeth Donahue. Francine Porter spoke on behalf of the Coalition at the City County Building rally and led marchers in vigorous chanting. We feel that we accomplished most of our objectives for the G20 and raised awareness about the refugee crisis, continual war funding, and violence across the globe.

The G 20 may be over, but our important work continues. "Now is an important time for activists to continue speaking out about the imperialistic wars being funded and supported by our government," says Francine Porter from Codepink. It's up to women to continue to raise awareness and pressure Congress about the imperialistic wars launched by our country in Iraq, Afghanistan, and the continual support of military and financial aid to Israel to continual the bruit al occupation against Palestine.

Article written by Claudia Detwiler with editing contributions by Susan Smith and Francine Porter. To get involved with women in Pittsburgh working for peace, e mail [email protected] or call 412-389-3216.