Will the New House Democrats Take on the War Lobby? 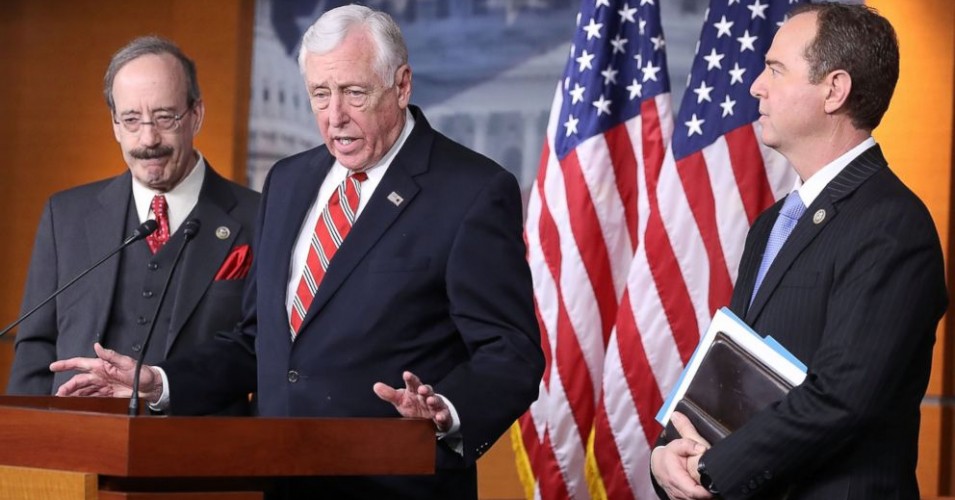 Among some of the most powerful Democrats in the House, Rep. Eliot Engel (NY-16) (far left), who aspires to chair the Foreign Affairs Committee, received $41,000 from the arms industry; Rep. Steny Hoyer (MD-5) (center), who is poised to become House Majority Leader, took $179,983 in arms industry cash in this cycle; and Rep. Adam Schiff (CA-28) (right), slated to chair the Intelligence Committee, took $80,743 from the war lobby. (Photo: Mark Wilson/Getty Images)

How can we expect the new Democratic House of Representatives to stand up to the war lobby if they choose leaders who voted for the disastrous Iraq war, fail to lead on critical current issues of war, peace and record military spending, and are still in the pay of military-industrial interests?

A new Democratic majority will take charge in the U.S. House of Representatives in January, thanks to a remarkable rebound in public participation in U.S. elections.  Based on early data, it appears that over 49% of eligible voters showed up at the polls this year, compared to a 70-year low of 36.4% in the last mid-term in 2014.  More than ever before, the Democrats should thank young voters for their success, as 18-39 year olds appear to have voted for them by a two to one margin.

An incredible 71.6% of 18-29 year olds voted for Senator Bernie Sanders over Hillary Clinton in 2016.  So it should be no surprise that the 2018 “Blue Wave” in the House is the youngest, most diverse and most progressive new class of Democratic House Members in many years, ready to fight for the issues that Sanders ran on in 2016 and that many of them have been working on in their own communities.

"Few new Members of Congress have a background in foreign affairs, so the new House Dems may face a bit of a shock when they discover that all their domestic priorities are held hostage by a huge 'war tax' that drains off well over 60% of federal discretionary spending for weapons, war and military spending."

But an issue that will seriously affect young people for decades to come, i.e. the direction of U.S. foreign policy, hardly featured in the 2018 campaign. Few new Members of Congress have a background in foreign affairs, so the new House Dems may face a bit of a shock when they discover that all their domestic priorities are held hostage by a huge “war tax” that drains off well over 60% of federal discretionary spending for weapons, war and military spending.

Even for those who have little personal interest in foreign policy, tiptoeing around this “elephant in the room” as past Congresses have done will permanently cripple and underfund all their other priorities, from healthcare, education and clean energy to tackling structural poverty in one of the richest countries in the world.

Half a century ago, Martin Luther King broke “the silence of the night,” as he put it, to address this insidious conjunction of foreign wars, record military spending and domestic poverty in his historic “Beyond Vietnam” address at the Riverside Church in New York City.  Dr. King hailed the Johnson administration’s poverty program as a “shining moment” in the struggle against poverty in America and spoke clearly about what had doomed it to failure: the Vietnam war.

“Then came the buildup in Vietnam, and I watched this program broken and eviscerated as if it were some idle political plaything of a society gone mad on war,” King said. “And I knew that America would never invest the necessary funds or energies in rehabilitation of its poor so long as adventures like Vietnam continued to draw men and skills and money like some demonic, destructive suction tube. So I was increasingly compelled to see the war as an enemy of the poor and to attack it as such.”

Today, although the U.S. is not fighting a war on the scale of Vietnam and the Cold War is long over, Defense Secretary Mattis’ budget request for FY2019, after adjusting for inflation, is 18% more than the wholesale diversion of resources that Dr. King decried in 1967.

The obstacles to confronting this structural problem will not come only from Republicans. They will also come from hawkish, corporate Democrats who routinely vote with a near-consensus of Republicans to approve the military spending bills that mortgage our children’s and grandchildren’s future and wars that destroy the lives and the future of millions of our neighbors around the world.

Money For Votes For War

As we documented in the CODEPINK 2018 Peace Voter Guide & Divestment Record, many of the Democrats with the most hawkish voting records are the same ones who rake in large campaign contributions from the U.S. arms industry. Former President Jimmy Carter calls U.S. campaign finance and corporate lobbying a system of “unlimited political bribery.”  This bribery, when it leads to record military spending, amounts to paying people to vote for weapons and wars that kill people.

A large portion of the 2019 Pentagon budget includes a $235.5 billion request for “investments” in new weapons and equipment, the largest amount since President Obama’s escalation of the U.S.-led war in Afghanistan peaked in 2011.

The ranking Democrat on the House Armed Services Committee—the committee that reviews, amends and approves the Pentagon budget—is Adam Smith (WA-9). It is hardly a coincidence that Smith received $261,450 in campaign cash from the arms industry in this election cycle, the second largest haul of all House Democrats. In 2016, Smith voted with a large majority of Republicans and only 15 other Democrats to keep selling weapons to Saudi Arabia.

In the midterm elections, Adam Smith was challenged by a young peace activist and democratic socialist, Sarah Smith, who won 31.7% of the votes, despite an 11 to 1 imbalance in campaign funding. Ms. Smith called the military industrial complex “horrifyingly bloated” and decried runaway militarism:

“We must prioritize diplomacy over war. Our interventionist wars in the Middle East have cost thousands of servicemen and trillions of dollars, as well as the deaths of millions of civilians in the attacked countries, to little benefit in Iraq, Afghanistan, and Yemen. This must end.”

Voting for the war on Iraq should have ended the political careers of the 111 Democrats and 263 Republicans who voted for it.  Most of the Democrats have in fact been turfed out or slunk away from Congress since 2002, but not all of them.

Of the 13 Iraq war supporters still holding onto seats in the House, Adam Smith and four others now aspire to powerful leadership positions, even as they all keep taking large campaign contributions from the war lobby.

CODEPINK and our partners in the progressive movement are calling on Adam Smith and all Democrats who aspire to chair Congressional committees in the new Congress to return campaign contributions from the arms industry and stop accepting them from now on.  You can sign our action alert at this link.

This may help to explain why Pelosi she showed no leadership on the greatest humanitarian crisis in the world today, the catastrophic results of the Saudi-U.S. war on Yemen. While she condemned the Republican effort to quash a bill to end the US role in the war on Yemen, H Con Res 138, it was only after protests from activist groups that she agreed to be a cosponsor of the bill.

How can we expect the new Democratic House of Representatives to stand up to the war lobby if they choose leaders who voted for the disastrous Iraq war, fail to lead on critical current issues of war, peace and record military spending, and are still in the pay of military-industrial interests?

The young Americans who turned out in record numbers in this election voted for new, progressive leadership.  Now it’s up to Democrats in Congress to deliver on what they voted for.

Nicolas J S Davies is the author of Blood On Our Hands: the American Invasion and Destruction of Iraq and of the chapter on "Obama At War" in Grading the 44th President: A Report Card on Barack Obama's First Term as a Progressive Leader.