Why should taxpayers reward the failures of Wall Street? 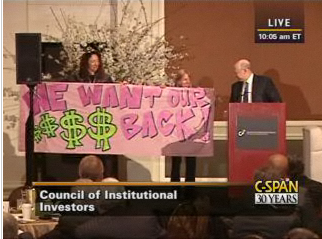 When we heard that the CEO of Goldman Sachs, Lloyd Blankfein, would be speaking at an Institutional Investors Conference today, we ran over to say hello. A few minutes into his talk, CODEPINKer Desiree Fairooz and I calmly walked on the stage with our banner saying “We want our $$$ back.” Goldman Sachs, after all, has been slurping from the public trough. It got $10 billion in TARP funds (remember that the architect of the TARP program, former Treasury Secretary Hank Paulson, proceeded Blankfein as CEO of Goldman Sachs). Goldman Sachs went back “sucking the tit of the taxpayer”, as Senator Grassley so graphically put it, by taking another $13 billion from taxpayer money given to AIG. (Was it just a coincidence that Paulson was Treasury Secretary when AIG was bailed out?)

Mr. Blankfein was quite nice in giving us a moment to display our banner, then said he would address our concerns at the end of this talk. So we agreed, walking off the stage and sitting back down.

Meanwhile, the staff of the event and the hotel security swarmed around us, demanding that we leave. We politely refused, saying we had to wait until the end to ask our questions. They threatened to call the police. We said that was up to them, but we would be staying.

During his talk, which was mostly fluff, Lloyd Blankfein preached about the need to peg compensation to performance of the firm. He failed to mention, however, that he received $43 million in compensation last year at the very time that his company reported its first quarterly loss since becoming a public company and its stock fell more than 60 percent. So much for performance-pegged compensation!

During the question time at the end of his talk, we went up the microphones to ask our questions. We’d go to one side of the room to ask a question, and security would follow us and take away the mic. Then we’d go to the other side of the room to use the other mic, but they’d take that one away, too. When we realized they were never going to allow us to ask our questions, we got up on the stage again.

I started to ask my questions: “Why should taxpayers reward the failures of Wall Street? Why should we bailout Goldman Sachs?” but they cut off the stage mic. While I was being carted away by security, I asked if Blankfein believed in socializing losses and privatizing profits. He didn’t respond.

Meanwhile Des, cool as a cucumber, walked back to our seats to get our belongings, repeating that we, the taxpayers, wanted our money back.

After we left, Mr. Blankfein acknowledged that our message was “real and visceral” and reflected “a prevailing view in the world.” We were glad to have brought a bit of real, visceral taxpayer anger into the roomful of folks scraping and bowing at the feet of this failed CEO!