Why not warmth in Afghan duvets?

Kabul--The Afghan Peace Volunteers are a group of young people in Afghanistan who are committed to learning about and practicing Gandhi’s nonviolence.  Many of them live in a house in Kabul.  I had met this inspiring group when I visited Kabul in the spring of 2011 with an organization based in the USA called Voices for Creative Nonviolence.  In mid-November, I had the opportunity to return to Kabul and spend a month living, working and playing with the group.
Because of rampant corruption in Afghanistan, the Afghan Peace Volunteers believe that donations always come with attachment to special interests and thus they do nothing to raise funds for themselves.  Yet they had voluntarily provided for a sewing course for poor women in Kabul who could come to the house.   Out of this sewing course project grew the idea of paying a living wage to the women for sewing duvets and then giving those duvets away to the very poor in the Kabul area.  Funds for this project go directly to the project, paying for the supplies and the sewing of the duvets.
On the day I rejoined the Afghan Peace Volunteers in Kabul, they were set to distribute 150 duvets to about 50 destitute families in Kabul. What a fun adventure!  I was sitting in the front seat of a taxi behind a truck that was piled high, watching Faiz and Ali grinning as they rode along atop the tall tower of colorful duvets down the dusty, bumpy street.  Tears came to my eyes as I thought of describing this moment in writing.  I hope that I can even capture a fraction of the joyful spirit that I felt. 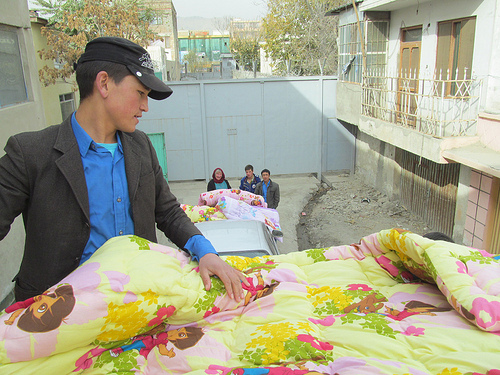 Ali on top of the pile of duvets on the truck,
with me watching in the background


The day’s adventure began with loading of the duvets.   These are like quilts that are thick, like sleeping bags filled with synthetic wool.  150 duvets turned out to be a very big pile that was challenging to fit on the truck.  The crew piled the duvets layers deep, as high as they could reach.  Then Faiz climbed on top.  Ali climbed partway up and the rest of the crew continued to carry out piles of two or three at a time while Faiz and Ali spread them on top higher and higher.  Once they got that tall pile strapped down they started another the same way and then we were soon off to take the duvets to a house where they would be distributed to some of the poorest people of Kabul.  At least 28 children died last year in Kabul due to the winter cold, so families were very grateful for these gifts.

Unloading the truck was another challenging team effort.  I sat down with mostly burqa-covered women and watched as the men and youth carried the loads into the yard.  The young man of the house we were at spoke with me.  He had had the opportunity to learn English in a program that provided lessons for free.  He had only been able to complete high school level education because his father died and he now needed to take care of his mother and younger sister.  They had two goats and two sheep tethered in the back yard and a few chickens roaming free.  The male goat was quite nasty toward any of the men carrying duvets if they got too close to him, but at one point one of the chickens jumped up and roosted on the goat's back for a while.  That was very sweet to see.

Once the duvets were stacked in two piles—one pile inside the house as well one that had been stacked outside--a coordinator began reading from the list of families who were to receive them.  He called out their names and the number of duvets they were to receive and the men and boys would carry those back outside the gate and onto the street followed by the women and children who would then bundle them up in whatever way they could so they could carry these large loads on their heads or in their arms.
As we were driving away it was fun to see the women and families walking down the street in this way--the colorful duvets standing out in contrast to the brown colors of the street and the sky all around them.

I was moved by how we can all reach out to one another in the global human family. We can watch a video clip of this duvet project at ‘Y not warmth in Afghan duvets?’
Those interested to find out more about the project can go to http://vcnv.org/the-duvet-project or write to [email protected] 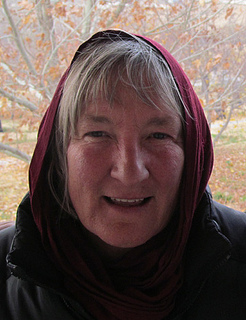 In addition to her travel as a peacekeeper and citizen diplomat, Dr. Linda Sartor teaches in the Graduate Leadership Program at St. Mary’s College in California and guides vision quest experiences with Rites of Passage (ritesofpassagevisionquest.org).  She was part of a delegation with Voices for Creative Nonviolence (vcnv.org), visiting the Afghan Peace Volunteers in Kabul.